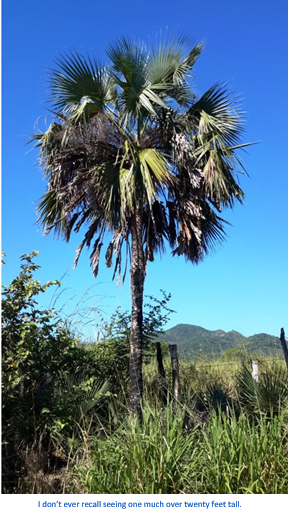 By Tommy Clarkson on the November 2020 Edition

(We’ve been able to grow almost any palm in Ola Brisa Gar-dens. But not this one! I’ve striven, repeatedly, to acquire one from “the wild”, from either of the small, selected enclaves in which I’ve found them. However, they have defied my every effort at transplanting – due to their long tap root. Besides that and how embarrassing for me – I’ve not yet been able to grow one from seed. But, in “The Civilized Jungle” hope [and a lot of plants] springs eternal!)

As a genus, Sabals are all New World palmate palms that many folks  call  palmettos.  Their  leaves  have  unarmed  petioles  (no spikes, hooks or needles), terminating in a rounded, rather palmate fan having no few leaflets. A few of my botanical reference books state that the Texas Palmetto can grow up to fifty feet (15.24 meters). H’mmmmmm.

Those in the two enclaves in which I have found them appear to have mature specimens that are nowhere near that height.

One of these locales is perhaps thirty miles south of Puerto

Having observed – and coveted – this species for over twelve years now, they appear to be slow growing and to not exceed around twenty to twenty-five feet (6.10-7.62 meters). Hence, I am confident that they’re not Dwarf Palmettos (Sabal minor) – which come quite close to the same description  as these grow to but five to ten feet (1.52-3.04 meters).

Furthermore, some secondary sources state that they like fertile soil near swamps or the coastline. Double h’mmmmm! Neither of the areas in which I have found them are such – both areas are at a bit higher elevation and in dry, not particularly rich, soil, appearing to thrive in the full sun.

Yet – other than this and their height – they meet virtually every other description, parameter and specification of the Sabal Mexicana! 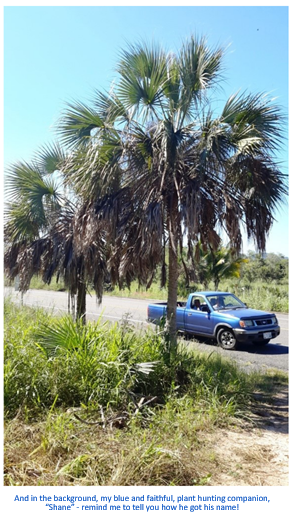 Bob Harms of the University of Texas wrote a rather germane and applicable piece, which might help clarify this quandary, entitled “Distinguishing Texas Palmettos from Dwarf Palmettos”. In it he stated, “A number of distinctive features…(differentiate) Texas Palmetto (Sabal mexicana) and Dwarf Palmetto (Sabal mi-nor)…The inflorescence of the (latter) rises above the leaves, later arcing down under the weight of fruits…that of S. mexicana always remains within the leaves.

The stem and leaves of S. mexicana are frequently several times larger than those of S. minor. Another key indicator of Texas Palmetto is its visible, emerged trunk…But the slow growing S. mexicana does not develop a trunk for many years – even with leaves as tall as twelve feet (3.66 meters)…the presence or absence of a trunk is somewhat misleading. Even Dwarf Palmettos have a trunk – but it remains below ground – one of the main reasons that it is virtually impossible to move larger plants from a natural site…The leaf of the Texas Palmetto has a central rib (costa) that runs almost the length of the leaf; the S. minor leaf has only a very short rib…which is an extension of the leaf stalk (petiole)…The segments of S. mexicana radiate along the full length of the central rib (strongly costapalmate) whereas the segments of S. minor are almost entirely at the leaf base (weakly costapalmate) and the rib itself is much shorter relative to the leaf segments.”

This confusion regarding these specimens gives pause to seriously consider whether these might be yet another dwarf species, not yet generally recognized, in tropical botanical publications. Accordingly, I hereby grant myself the “As further data come to light, I reserve the right to change my mind” privilege! With an excellent fiber obtainable from the leaf stalks, the leaves are used for making baskets, chair seats and thatch. They are also used to make brushes – particularly those which have to remain stiff in caustics or hot water.