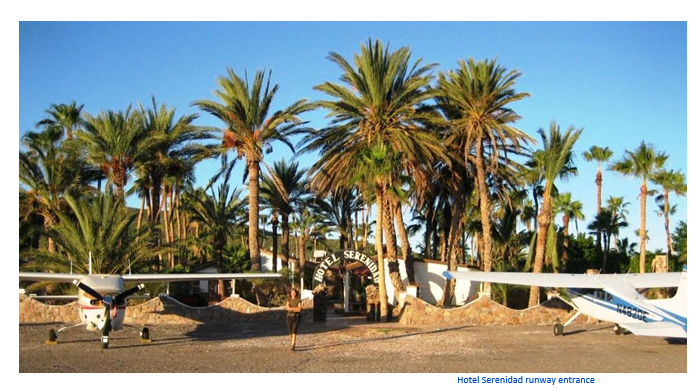 By Dan and Lisa Goy on the November  2020 Edition 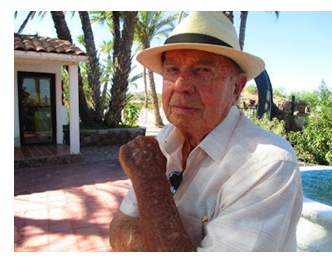 Don Johnson, a true Baja Legend and owner of Hotel Serenidad in Mulegé, passed away on September 15, 2020 at age 94. Don was synonymous with Hotel Serenidad, where he and Nancy welcomed everyone from Hollywood elite to Baja travelers for decades.

Don was born on December 20, 1925 in Springfield, Illinois and was raised in San José, California. His first visit to Mulegé was in 1959 when he and a friend spent a week navigating a panga from San Felipe all the way to Mulegé. That spirit of adventure led Don to leave his job as a custom tailor in San José to move to Mulegé, full time, in 1961, to become part owner of the Lo-ma Linda Hotel, with his long-time friend Lou Federico, located on the north side of the river. Don loved Mulegé and the people that lived there, who universally loved and respected Don, his strong work ethic and gracious personality. 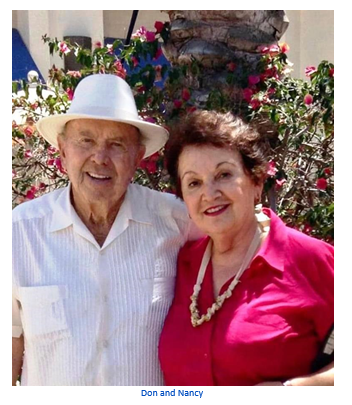 Don fell hook, line and sinker for a local girl, Nancy Ugalde Gorosave, and the two married in 1964. Nancy is the grand-daughter of Mulegé area rancher Don José Gorosave and together they raised three daughters, Diana, Sara Laura and Sandra Lyn. The oldest, Diana, ran the hotel until a few years ago. It was a love story that would span more than 50 years until Nancy’s passing in 2016. Don built a memorial to Nancy on the hotel grounds. The last time we were there, Don showed us and told us the story of its commemoration.

A regular stop for us on tour always includes the Hotel Serenidad, located just south of Mulegé, the gateway to the beautiful Bahía Concepción. The hotel has 7 RV spaces that include power, water, showers and dump stations at each site, all along the back of the parking lot. These are not particularly fancy, however very practical, reasonably priced and, best of all, a 30 second walk from the Hotel Serenidad, a real Baja treasure for sure!

Two different WiFi signals are available, one in the restaurant and another in the bar, which can be accessed from the outside patio and poolside. The restaurant opens at 6am for the early birds and closes late, as long as patrons want to stay and enjoy the ambience.

The Hotel Serenidad has a long and fascinating history. The Serenidad (Serenity) Hotel was originally developed in 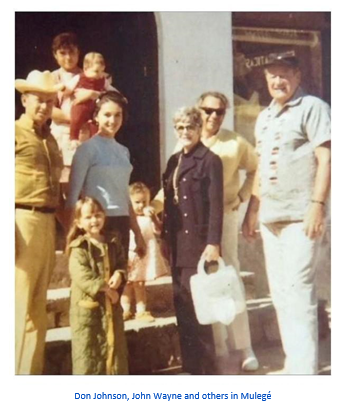 1961 by Leroy Center. Don Johnson, who had earlier been part owner of the Loma Linda, was the Serenidad’s boat manager during the 1960s.

Later, with partners Fernando del Morel and Chester Mason, Johnson bought the resort in 1968. Don, together with his wife Nancy, has owned the Serenidad ever since, his name synonymous with the place.

He built a 4,000-foot airstrip that was an integral part of the business succeeding as the transpeninsular highway was still a dirt road at the time. The airstrip next to the Serenidad has always been, and still is, the main source of travelers for the hotel. The landing strip brought Hollywood regulars to the hotel such as Fred Astaire, Charles Lindbergh, James Arness, John Denver, Olivia Newton John, and John Wayne.

Don developed a deep friendship with “The Duke” who was a frequent visitor to Baja and Hotel Serenidad. Don was likewise a guest many times at Wayne’s home in Newport Beach.

The hotel became a lush oasis and an exotic escape for people flying in for a weekend of true relaxation and fun. By the early 1970s, the hotel offered modern accommodations, a patio dining, a bar and a new swimming pool.

The Serenidad became like its name, serene, with large, beautifully furnished rooms across tropical grounds. A large outdoor patio was built and is still used for dining alfresco. 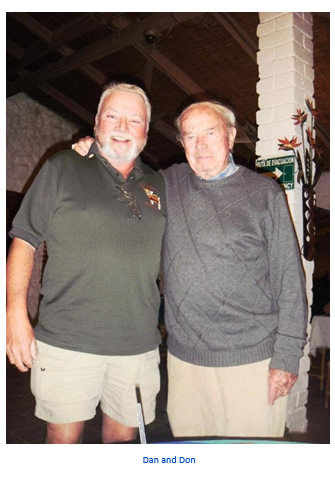 We were hosting a booth at an RV show in California in 2017 and got talking with a visitor about his days as a young man flying a DC 3 into the Hotel Serenidad. He spoke fondly of the owner (an old guy as he remembered). He was stunned when we told him Don Johnson was still there welcoming guests.

Saturday Night Pig Roast
Don started a tradition that has been going strong for almost
45 years. We have attended many. Every Saturday night is a pig
roast and Baja pilots still fly in just for the feast, which includes
one margarita, all the roast pig you can eat and sometimes live
music or other entertainment. The tradition began as an occasional weekend celebration.
Ray Cannon, author of the bestseller, Sea of Cortez, wrote
about the Serenidad and the beginning of the pig tradition in
1970: “Most of our group stayed at the Hotel Serenidad, where
another old friend, Don Johnson, is co-operator and where he
sees to supplying gas and supplies to the boats at his pier. Don
had a whole pig barbecued for us on an old style spit beside
the outdoor dining veranda. The evening was a gay one…”

Occupation of the Hotel Serenidad 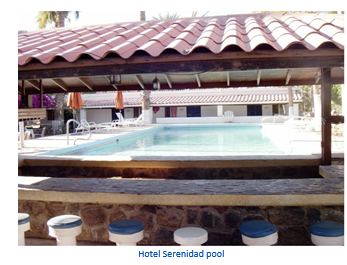 On July 14, 1996, three decades of serenity at the Hotel Sereni-dad came to an abrupt end. It was a Sunday and the hotel was Lisa and Don packed  with  such  regulars  including  a  Superior  Court  Judge from San Diego, when 94 Mexican locals invaded and occupied the hotel. This was a dispute over land ownership and the ejidatarios, or Mexicans who own land communally, evicted the owners and guests and seized the rooms, dining room, pool, bar  and  airstrip.  Locals  in  cowboy  hats  replaced  well-heeled tourists beside a pool which was soon filled only with two inches of green pond scum.

Ultimately Don Johnson and Nancy Ugalde de Johnson, a fifth-generation Mulegé native, spent six months in court to prove that Nancy, Mexican born and bred, was the legal owner. Eventually, a federal judge in Mexico City ruled that they had legal title to the land.

The hotel did reopen; however things were never quite the same, with underlying tension amongst some members of the community in Mulegé years later.

Don put his heart and soul into the Hotel Serenidad and was always a true Mulegé champion and promoter. He never stopped working on ways to improve the hotel, which is remarkable given the multiple hurricanes and floods they have suffered just in the last 15 years. In 2015, we showed up with our Baja Amigos caravan and Don was in the parking lot directing a dump truck with a load of new gravel for the parking lot. When Don saw us, he grabbed a shovel to spread the piles around so to not catch on the bottom of the RVs. Not bad for a guy closer to 90 then 80 years old at the time. 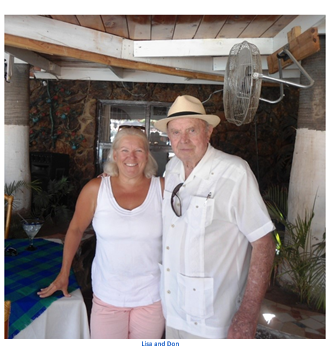 For the last couple of years, he had been working on a new RV Park on the adjacent Shangila property. He knows that many of the larger RV caravans bypass Mulegé because they have no-where decent to stay that accommodate 20 to 30 rigs.

Although Don has not run the hotel in years, he always served as the unofficial ambassador at the Hotel Serenidad, constantly visiting and chatting with his guests. It is a comfortable role for him, as in 1980 he became the American consul in Mulegé, a job he performed for 13 official years and 20 unofficial ones. Don loved to tell stories and engage the guests.

He always had time to answer questions about the area, the history or listen to whatever it is you want to talk about. You could always count on Don to be one of the most interesting and gracious hosts Mulegé has to offer.

Next time you are on Baja, make sure to drop in to the Hotel Serenidad and experience the unique character, tranquil ambience of this establishment that was decades in the making, and is a real Baja treasure.

Don will be missed but always remembered! He is survived by his three daughters, Diana, Sandra, and Sara Laura along with many grandchildren whom he loved dearly. We under-stand the family intends to upgrade Hotel Serenidad and continue its operations.

We already have our reservations made for the upcoming Snowbird season. 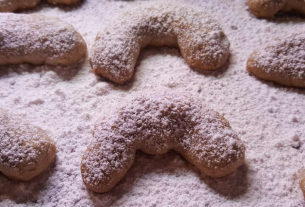 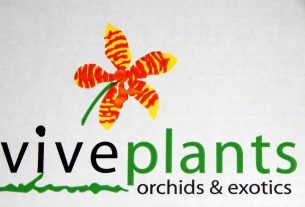 Among the Beauty of Orchids