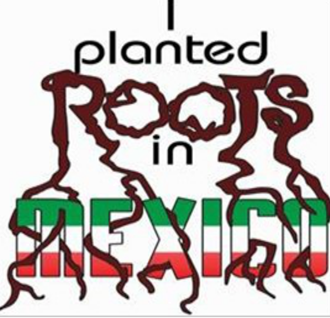 A Sucker for Cycads 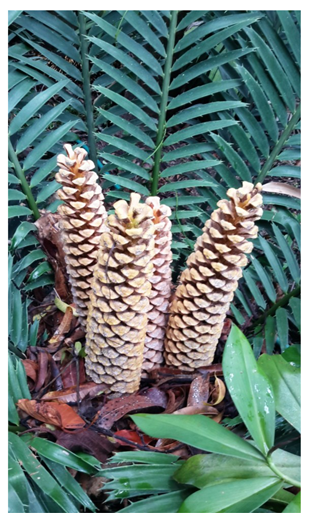 Suffice it to say, I really like ‘em!In the center of the entryway to our home stands a magnificent Prince Sago Palm (Cycas taitungensis). It sets the tone for the array of tropical plants interspersed throughout Ola Brisa Gardens. But, in spite of what no few initially think, it is not a palm (or fern, as some suppose) at all! In fact, plant characters of this unique nature are believed to be among the earliest of all of earth’s seed plants.

Relative to this discussion, let’s jump to the other side of the world where I’d like to introduce a quiet, kind, botanical guru, with a hint of a twinkle in his eyes, whom I admire immeasurably – Anders Lindstrom. He is the plant curator of Nong Nooch Tropical Botanical Garden in Pattaya, Thailand and, with 12,000 plant species gloriously thriving in it, one of the largest and most diverse botanical collections in the world. He is the ultimate “Go to Guy” regarding cycads!

He is also the manager of the cycad gene bank and, without question, the world’s premier authority on these ancient plants – cycads. I’m firmly of the belief that he possesses more knowledge of them in the cuticle of his smallest finger than most of us could ever imagine! (Beyond this, he graciously wrote the Forward for Volume III of our first book series, “The Civilized Jungle” which was dedicated to my life partner, book collaborator and love of my life, Patty . . . who passed away in May of 2019.) 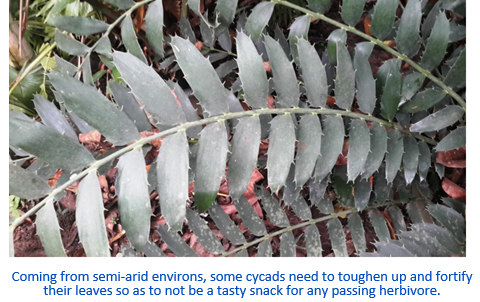 But, Anders is not a boring, bookish botanist. His feet have long been far in the field, from where, deep in the bowels of some very remote, tropical locales, he has amassed a personal collection of all 330 known species of the world’s cycads. One would be correct in calling him the ultimate cycad sensei!

Here in Ola Brisa Gardens, my paltry few cycad specimens pale when compared to his superlative assemblage. But they do provide good insights into “the nature of the beast” and a means to compare old and new world species.

So let’s discuss some cycad basics. They are, literally, older than (some)  dirt  and  are  among  the  oldest  plant  families  in  the world. In fact, a fossil – albeit, rather cold when found of a cycad like plant, dating from the Triassic period (201-252 million years ago) has been found in Antarctica. . . which has not always been earth’s icebox! 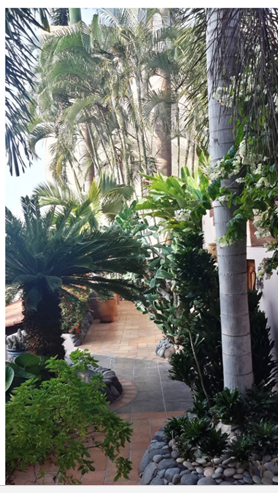 That noted, these days, cycads are renowned for their ability to survive in harsh semi-desert climates, sometimes growing in sand, or even on rocks, and capable of surviving, if not thriving, in full sun or shade, with some species being salt tolerant.

As to worldwide distribution, the peak in the northern tropics is that of the genus Cycas in Asia and the genus Zamia in the New World. I’ve a wonderful, large Cardboard Palm (Zamia fur-furacea) directly across from our street entry.

South of the equator, we find, again, the genus Cycas and En-cephalartos in southern and central Africa and Macrozamia in Australia. The Cycas genus has a broad geographical range, probably as a result of the drier climate in these realms with somewhat cool winters.

On the terrace directly below our dining palapa, on the left, is a King Sago Palm – which we know to, actually, be a cycad.

Behind it, one can see the pinnate fronds of a Bottle Palm, behind it a cluster of Butterfly Palms, behind them, the trunks of two solitary Cuban Royal Palms on the right the trunk of a Fox-tail Palm.

Superficially, cycads are rather similar-in-appearance look to palms, what with their upright trunks and leaf stem scars, topped by a crown of pinnate leaves. But, for all intents and purposes, that’s where the similarities stop. In lieu of flowers, cycads sport cones. They may appear “tree-like” with an upright trunk, or have one which is tuberous and underground.

And while the Quindío Wax Palm (Ceroxylon quindiuense), found in the Andes, can grow up to 60 meters tall, the maxi-mum height of any cycad species may be that of the Hope’s Cycad (Lepidozamia hopei), from North Queensland in Australia, with trunks ranging as high as 20 meters. (I’d sure like to have one of these!)

Purportedly, the most senior of palms are those in the Date family (Phoenix genus) reaching the rather mature age of around 200 years, whereas cycads are thought to live double that or, significantly, more. One of the oldest “in captivity” is an Eastern Cape giant cycad (Encephalartos altensteinii) in Kew Gardens in London and is, at least, 228 years old.

Another difference between palms and cycads are the latter’s bulblets. Also called bulbils, these, when full-sized, may be removed and planted to produce new plants and often form on the exterior of the trunks. This is particularly so with the King Sago Palm (Cycas revoluta)  perhaps the most commonly grown of all cycads. (Mine is happily at home on the terrace below the infinity pool!)

Without the presence of their cones, it is not possible to differentiate between male and female cycads. “Those in the botanical know” often carefully study the structure of these cones to identify the different – otherwise somewhat similar in appearance species.

The ensuing, brightly colored seeds  commonly ranging from yellow to a more orange hue, brown to green or from dark to bright red are often dispersed by animals and birds.

With a degree of food value (but beware as some cycad parts contain dangerous toxins), various varieties of species’ seeds have been ground into flour by indigenous folks, while others produced a tapioca sort of edible starch from the plant’s pith. However, I’d advise that we regularly grocery store visiting, folks not try such!

Should one seek some of these beautiful but rather slow growing  sorts around their home, remember, they like sun-shine and well draining soil.

Cycads grown indoors should be kept moist and never allowed to dry out, watering in the summer as much as twice a week, but during the colder seasons watered sparingly.

Similar consideration should be given to your outdoor specimens.

If you’ve space and inclination for a new tropical family member  adopt a cycad. In fact, feel free to come by Ola Brisa Gardens and if I’ve “pup”  what the baby starts are called – I’ll be delighted to give it to you!