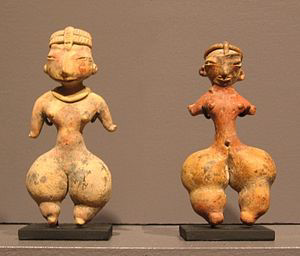 By Kirby Vickery on the January 2020 Edition

When people talk of the Mesoamerican Societies and their culture, we have a tendency to skim a little (actually a lot) and for-get what was here in Mexico and further south before Sr. Hernán Cortés took it over in the name of the King of Spain and the Catholic Church.

What he did, and what he changed, was honorable to his own culture and time. With the prevalence of the Christian religion behind him, he was able to effect this major change on the entire face of the American continents, to include Central America, so much so that it has taken all this time, into the twenty-first century to be able to look back and see what actually happened with any kind of depth of understanding. I don’t want to be pompous but, as a student of history, I have found that way too many stories in current text of the Americas have a tendency to start with explorers, like Columbus and Cortés while leaving out eons of time and culture out in the cold, so to speak.

We modern people shouldn’t try to justify, nor condemn, this past, nor the people that acted within it because they did what they did with their societies behind them. Historians are charged with the responsibilities of reporting the past as it actually happened. What we are seeing is the result of a totally destroyed society(ies) at the hands of an old world invasion, greed and subsequent total domination of what was left of the civilizations of the New World at the time.

What I find confusing, even though its intent is the antithesis, is today’s historical text speaking of this history in ‘Eras.’ They, meaning archeologists and learned historians, have the entire pre-Colombian history broken out into seven eras. One of them even has two names. This appears to help the student of Mesoamerica realize the history through the timelines and aid ‘modern’ folks in obtaining a grasp of the immensity of the culture that was on its downhill slide when Cortés got here.

What we are faced with is the realization that the thousands of years of societal growth, within the time frame from the initial crossing of the Beringia land bridge and that of Panama, into the various societies from the Abenaki in Maine, New Hampshire and Vermont, into today’s world, all the way to the Kumiai, San Dieguito, Kiliwa, Pai Pai Cocopa and Kumeyaay Indians that settled the Baja peninsula. They did this all the way from 12,000BCE. The last to come into that arena (far western America and Baja California) were the ‘Yumano’ (now you know where that town got its name) speaking tribes. Several are still residing in Northern Mexico and Southern Arizona today with relatives all the way to the Mississippi river.

Each population thrust across this Beringia land bridge, then running South (and there were four of these thrusts or surges) did so not only at different times but in different places. For a long time, it was assumed that, as the weather cooled across the Beringia, the people crossing took more southern routes which meant their movement down through the North American Continent moved further westward. This meant that the east coast of Mexico was populated before the middle and before the west.

That may be true in the overall scheme of things, except that some of these people, whom were apparently attached to the sea, stuck to the western coastal route, from start to finish, even to the point of populating all the islands in the

Pacific ocean. These are related to the peoples that settled the American West to include Baja California. Way before the Olmecs of eastern Mexico, these hunter gatherers were populating most of Mexico without building anything more than a thatched hutch and a fish drying rack. Archeologists and historians have a tendency to categorize groups of people into families and separate cultures based on what they left behind. Back that far, it is difficult to classify people when all you can find are little piles of fish skeletons mixed in with the shells of crustaceans, an occasional arrow or spear head or a pile of charcoal which once was a seaside fire.

There was one group of these hunter-gatherers that settled near modern-day San Javier and El Rosario. They spoke a language that is similar to that of the modern Yuman indigenous people. Among their notable practices was ‘maroma.’ These people would take a good-sized piece of meat and tie a string to it. Then each person would take a turn in swallowing it only to have it pulled back up for the next in line to swallow. This would continue until the entire piece of meat would be ingested.

Two things prohibited these people from forming a giant culture as did the Olmecs all the way to the Aztecs. One was the lack of a common language or at least common enough to be written down. The other was their apparent lack of agriculture. This alone would keep these people from being able to form any centralized society as the Olmecs and apparently the Nahuatl speaking peoples did. But they were all connected throughout Mesoamerica. There is evidence that these shore people knew and traded with the people farther inland who would encase their dead in extensive tombs. These folks would also trade implements and art with still even more advanced peoples like the Tlatlico of the Mexico Valley who, in turn, would trade with the Capacha whose culture was centered in Colima, who traded even farther east from the coast with folks like La Campana.

Some of these isolated, former huntergathering sites have dis-appeared. Some have grown. When the entire area’s population grew to a point where everyone knew about everyone else, trade ensued, thus aiding and supporting a major culture like the Olmecs or the Mayans.

I visited this site several years ago when they had no idea who built it. It is a wonderful day trip from Manzanillo and I would suggest doing your homework before going. The main site is located about six miles north of Colima and, as you walk onto it, you get a sense of history. Kinda hard to explain. But, if you go there, you’ll know what I mean.