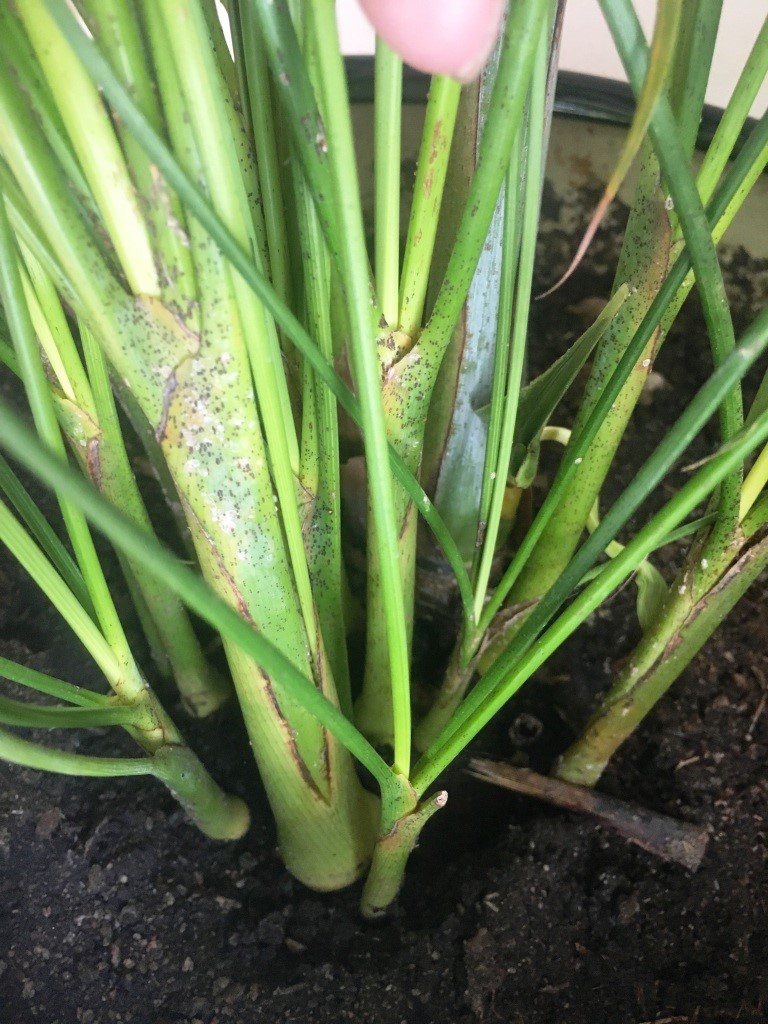 By Tommy Clarkson on the January 2020 Edition

While having our specimen happily thriving as a potted, shade-appreciating, interior palm in the lower living room for perhaps ten years, I’d never gotten around to properly identifying it. It seemed somewhat obvious that it was in the Chamaedorea ge-nus, but which of the some 100 species?

Several of these I’ve written about previously. In Volume I of “The Civilized Jungle,” it was the Parlour Palm (C. elegans) and the Metallica Fishtail (C. metallica). In Volume II, it was the Bamboo Palm (C. selfrizii). Beyond these, I have three more in this genus: an unidentified, clustering species found a couple of hours from here close to a waterfall, somewhat near the small community of Canoas; another attractive solitary species; as well as an additional clustering species – both of which I have long since forgotten where I acquired them!

I’ve puzzled and have been pondering no little amount as to whether this unarmed, self-cleaning, clustering pinnate was what I call it above, a C. elagans (in a fine leaf form), a C. hooperiana, a C. radicalis or even a trunkless form of Radicalis Palm, Chamaedprea radicalis (which is also called/confused with a C. pringlei and C. atrovirems by some botanists and horticulturists). All can be found, in the wild, in Mexico and are exceedingly understatement of the day similar appearing.

In the “Guide to Landscape Palms,” written by Alan W. Meerow, he described this small, virtually trunkless palm as follows, “Each stem splits just above the soil level and a beautiful, well rounded clump is eventually formed . . . (it) is of easy culture and is useful as a low shrubby accent in the shaded garden (While also making) an attractive potted specimen. . . (it) is more tolerant of higher light levels . . .but will still bleach in sunny locations unless water and fertilizer are regularly provided.”

David L. Jones states in “Palms throughout the World” that the Cascada Palm is a rheophyte (A plant that can grow in running water.) That makes sense as, perhaps, you are aware, cascada is Spanish for waterfall and, of course, cataract is a synonym for that same entity. Ours, I guess, gets its falling H2O vicariously in that it’s placed but a couple of feet from our infinity pool, with the garden’s closest other running water being the water-fall seven terraces below!

In “Cultivated Palms of the World,” Don and Anthony Ellison wrote about forty-two different species of Chamaedorea. And, just in case you weren’t yet fully confused by the array of names, they state that C. martiania and C. atrovirens are synonyms for this species! They go on to say that the natural habitat of this “densely clumping and spreading palm” are Mexico’s rainforests in which they can grow to a height of around five feet (1.52 meters). They further describe it as sometimes sporting “Ripe ¼ inch (.63 cm) in diameter fruit that is black and oval, capable of fresh seed germination in two to three months with bottom heat.”

I then sought further, more detailed information from one of the more comprehensive botanical books written solely about this genus “Chamaedorea Palms, The Species and Their Cultivation,” by Donald Hodel. Regarding the Chamaedorea cataractarum, he writes that “it inhabits the banks of rivers and streams of the Atlantic slope of Mexico in the states of Oaxaca, Tabasco and Chiapas, occurring in or near water and being wholly or partially submerged during heavy rains and flood.”

Hodel went on by saying “it is also unusual in its branching pattern. With age, plants tend to creep along the ground and over rocks with their horizontal stems branching in a dichotomous (the axis are divided into two branches) manner. This . . . results in thick clumps with a sturdy network of thick, horizontal stems which grow along the ground, anchoring the clump securely. Along with flexible leaves and leaflets that tend to bend and sway with an opposing force, the creeping and securely anchored stem enables (it) to grow and survive in and along streams where it is occasionally inundated by swiftly moving water.” With ours potted and not in running water, this is a bit difficult to affirm.

This all noted (and admittedly, I’m still a bit befuddled myself) , it is a highly flexible plant, adaptable to a variety of soil conditions, low to moderately drought tolerant if grown in shade and not a good shore plant.