I love Mexican food. I have always loved Mexican food. Not so much all the Southwestern American versions, but good Mexican food. I was surprised as a child that the food I got in Barcelona, Spain, didn’t come close to what I thought it should be after growing up in El Paso and eating real Mexican food. I will not debate the authenticity of any of it. But I thought folks would like to see the top few historical references to the best food in the world.

1. Chocolate
Legions of chocoholics would argue that the Mayan “Food of the Gods,” made from the toasted, fermented seeds of the cacao tree, is the New World’s greatest gift to civilization. Though Cortés learned of chocolate from the Aztecs, they had acquired it through trade with the Maya, who first cultivated it about 3,000 years ago. Maya and Aztec aficionados drank their chocolate bitter and spicy; sugar was unknown before the conquest. Even today, chocolate in the Yucatán may be flavored with paprika, annatto or even pepper. But it was more than a drink to the Maya who believed it came from the gods and formed a bridge between heaven and earth. Cacao seeds were an early form of money, and archaeologists have uncovered counterfeit seeds made of clay.

2. Vanilla (vainilla)
The elixir is from the world’s only known edible orchid. It was probably first cultivated by the Totonaca in the state of Veracruz and had become a common flavoring for the Maya’s chocolate drinks by the 1500s. Vanilla, too, was adopted by the Aztecs, who introduced it to Cortés. Spanish and Portuguese explorers who brought it to Africa and Asia in the 16th century named it ‘vainilla’, or “little pod.” Southern Mexico’s jungle is still the only place the Vanilla planifolia orchid grows wild, pollinated by native, non-stinging bees that produce Maya honey. Today’s prized Tahitian vanilla, which came from Mexican stock, requires hand-pollination. An interesting side note about the Aztec’s bloodthirsty behavior toward their conquered enemies was that they would demand slaves and an annual tax from the vanquished. When they conquered the Totonaca, all they want-ed was the vanilla.

3. Corn (maíz)
Every elementary-school kid knows corn was the most important food in the Americas. The Popul Vuh, the Maya “bible,” attributes humankind’s very existence to this domesticated strain of wild grass. In its creation myth, the “Creators and Makers” fashioned man from tender kernels of yellow and white corn after failed attempts with mud and wood. Though corn was a dietary staple in most of Mexico as long as 6,000 years ago, it was the Maya who first cultivated it around 2500 B.C., abandoning their nomadic ways to settle in villages surrounded by cornfields.

4. Chile
Chiles were cultivated in the Americas as long as 7,500 years ago. Blame Christopher Columbus for mistaking them as relatives of black pepper, native to southern Asia, but give him credit for spreading them throughout the world.
The release of endorphins, increased heart rate, mental stimulation and euphoria provoked by chiles’ capsaicinoids the ingredient that makes them taste hot qualifies them as psychoactive plants. Southern Mexico’s Capsicum annuum species, with its many cultivars, is crucial to nearly every fiery cuisine in the world.

5. Tomatoes (tomates)
Even the Italians had to make do without tomato sauce before Columbus set out for the New World. Precursors originated in Peru, but the tomato as we know it came from the Yucatán, where the Maya cultivated it long before Cortés first encountered one in an Aztec market around 1520. Native versions were small, like cherry tomatoes, and probably yellow rather than red.

Two years after Cortés brought the tomato back to Spain, it made its way to Naples — then under Spanish rule — where invention of the pizza made tomato sauce a necessity of life. Once believed poisonous because they are related to the deadly nightshade, tomatoes are now a staple of nearly every cuisine in the world.

6. Black beans (frijoles negros)
Archaeological digs indicate the black bean originated in southern Mexico and Central America more than 7,000 years ago. With their meaty flavor and velvety texture, black beans are still the favorite in and around the Yucatán, where they may turn up in almost any dish. They have spread widely throughout Lat-in America, the Caribbean, and the southern United States, be-coming an important part of the many regional cuisines.

7. Avocado (aguacate)
From its origins in southern Mexico, where it was prized as an aphrodisiac the Aztecs called it ahuacatl, meaning “testicle,” and kept their daughters indoors during harvest season the avocado spread north to the Rio Grande and south to central Peru before Europeans encountered it. The tree is one of the few that has ‘male’ and ‘female’ trees, with only the female tree bearing fruit. In an orchard, everybody gets along great when they have only one male tree for every nine females. The sexual association carried through the 19th century when growers who wanted to cultivate avocados commercially first had to mount a campaign to persuade the public that eating avocados did not equate to licentiousness. Mexico is still the world’s main source of avocados.

8. Sweet potato (camote)
Sweet potatoes are native to the tropics, from the Yucatán to Venezuela, and the Maya domesticated the plant at least 5,000 years ago. By 2500 B.C., sweet potatoes had spread throughout the Caribbean and South America. Sweet potatoes belong to the genus Ipomoea, which includes morning glories. Though commonly confused with the yam, what we know as yams are simply another variety of sweet potato. True yams are native to Africa; when slaves from that continent were deposited in North America they adopted sweet potatoes as a substitute for the tuber they had eaten in their homeland and called it by the familiar name.

9. Squash (calabaza, calabacita)
Though corn and beans are better-known Mexican natives, squash predates them by several thousand years; Maya people domesticated several varieties of squash as early as 8000 B.C. Oils from these seeds were the main source of dietary fat be-fore the Spanish introduced beef and pork. Though the native plants included cucumber, zucchini, patty pan and butternut squash, great quantities of pumpkin (la calabaza grande) de-fines the Yucatán diet even today. Toasted, ground pumpkin seeds still appear on menus even more than the flesh. Another good reason for their popularity was that the hollowed-out gourds made excellent water containers for people on long trips. Please remember that pig bladders could have been used but they, like horses, were introduced by the Spaniards. So, the Mesoamerican people were on foot while travelling, carrying gourds with woven fiber straps.

10. Papaya
Though it is more closely associated with Hawaii now, all indications are that the papaya originated in the tropics of southern Mexico and Central America. After the Spanish carried seeds to Panama and the Dominican Republic, cultivation spread throughout South and Central America, the Caribbean, Europe, the Pacific Islands, India, and parts of Africa. It became naturalized in many areas and still grows wild along Mexican roadsides. Hawaii, where papayas first arrived in the 1800s, is the only U.S. state to grow them commercially.

Yes, I know there are others, and most of them run in the spic-es and herb categories. But these are the unique biggies. 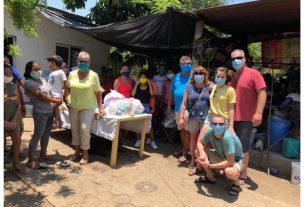 Pulling Together in Critical Times of Need