By Dan and Lisa Goy on the April 2020 Edition

Playa El Tecolote – It’s all about the wind!

One of our favourite destinations on Baja is Playa El Tecolote, a 30-minute drive from the capital of Baja California Sur, La Paz. Playa El Tecolote, (owl beach) is located at the tip of the short peninsula, which juts into the Sea of Cortez and has been described as one of the most beautiful beaches on the peninsula. Swimming and kayaking are always popular here and be-cause El Tecolote is open to the stiff breezes of the Canal de San Lorenzo, the camping is largely insect-free. When the wind is down, this beach is a paradise for dry camping (boon docking). This is a public beach and there is no charge for your stay, whether one night or 4 months. Many RVers make this beach their winter home for the entire season. The days are warm, the nights cool and simply perfect for camping.

The knock is the wind, often howling from the north directly towards the beach, which happens frequently. The wind can be so strong your RV can rock for hours on end. Hence many of those who settle in for a long time stay set up behind a sand dune and have their patio facing south. Every visit with our tour groups are 2 to 3 days long and, depending on the wind, the experience can be wonderful or not so good. We have folks frolic in the water, kayak, paddleboard, fish, snorkel at the reef just of shore and take tours to swim with Sea Lions with calm seas. Hiking and a visit to Playa Balandra is more common when the wind is up.

El Tecolote includes two palapa restaurants, El Tecolote and Palapa Azul that sell seafood (freshly grilled snapper) and cold beverages, rent beach chairs and umbrellas, fishing gear and kayaks. Free municipal palapas, barbecue grills, and trash barrels dot the beach north and south of the restaurants. These eateries are usually open throughout the week, though they sometimes close on wintery days. They do tend to be a bit ex-pensive, which is puzzling given that locals are mostly the clientele. The breeze does keep the insects down and the beach can be noisy over the weekend, largely with families in warmer months.

Isla Espíritu Santo is an island in the Gulf of California 6 km (4 mi) away and clearly visible in the distance from Tecolote. It is connected to Isla Partida by a narrow isthmus. Espíritu Santo has a land area of 80.763 km² (31.183 sq mi), the 12th-largest island in Mexico. Isla Partida’s land area is 15.495 km² (5.983 sq mi). Ensenada Grande beach, on Isla Partida, was voted the most beautiful beach in Mexico by The Travel Magazine and one of the top 12 beaches in the world. The area is protected under UNESCO as a biosphere, and its importance as an eco-tourism destination is the main factor. The islands are both uninhabited and you can hire a panga to cross the channel. Tours are available right off the beach.

Sea kayaking is a popular activity around the island as is swimming with Sea Lions which we have done and is very affordable.

Playa Balandra is one of the truly remarkable beaches in the La Paz vicinity, located on Peninsula de Pichilingue and only a 5-minute drive from Tecolote. Sheltered from wave action from nearly every direction, the water warms early and is very safe for swimmers, with the exception of the occasional small stingray. Puerto Balandra, the saltwater lagoon, boasts eight unspoiled bays, with spectacular beaches, including Playa Balandra. 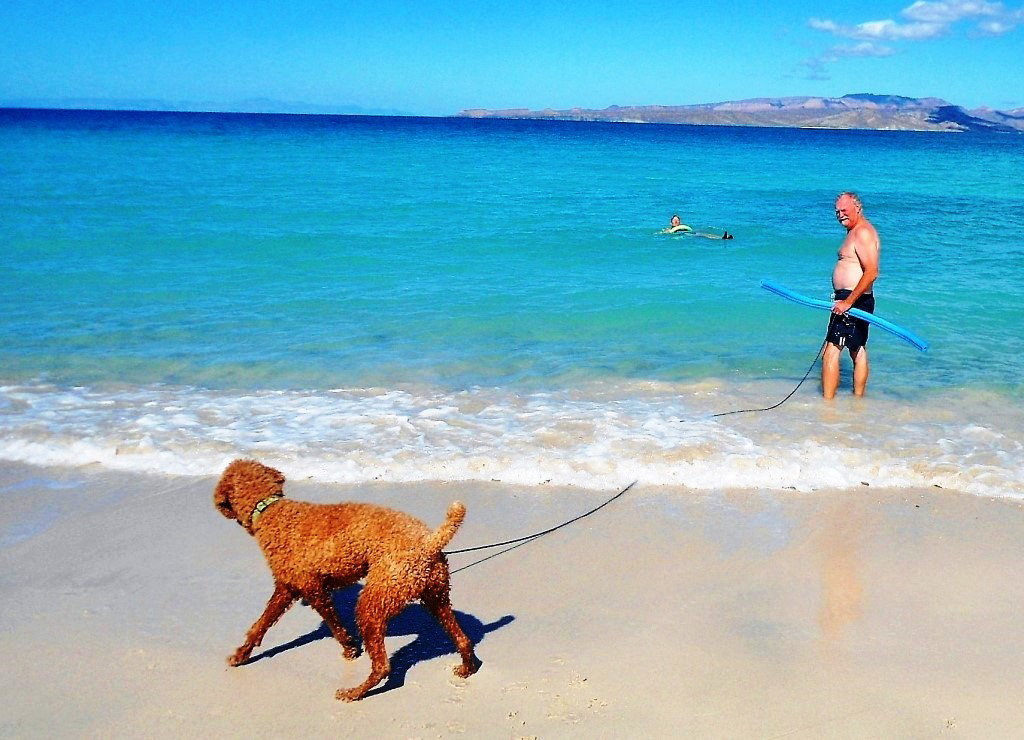 The sandbar runs completely across the bay, allowing you to wade from one side to the other, and half mile away through water usually no deeper than chest high. In fact, the waters in the bays are so shallow you can walk around the right-hand cliff to Balandra, also known as Playa El Hongo (Mushroom Beach) for its famous rock formation that resembles a giant mushroom (also known as the Balancing Rock and Diamond Rock). Once you have seen the formation, the mystery of the fountain in La Paz’s central plaza is solved the strange looking lump in its center is a replica of this mushroom-shaped rock. 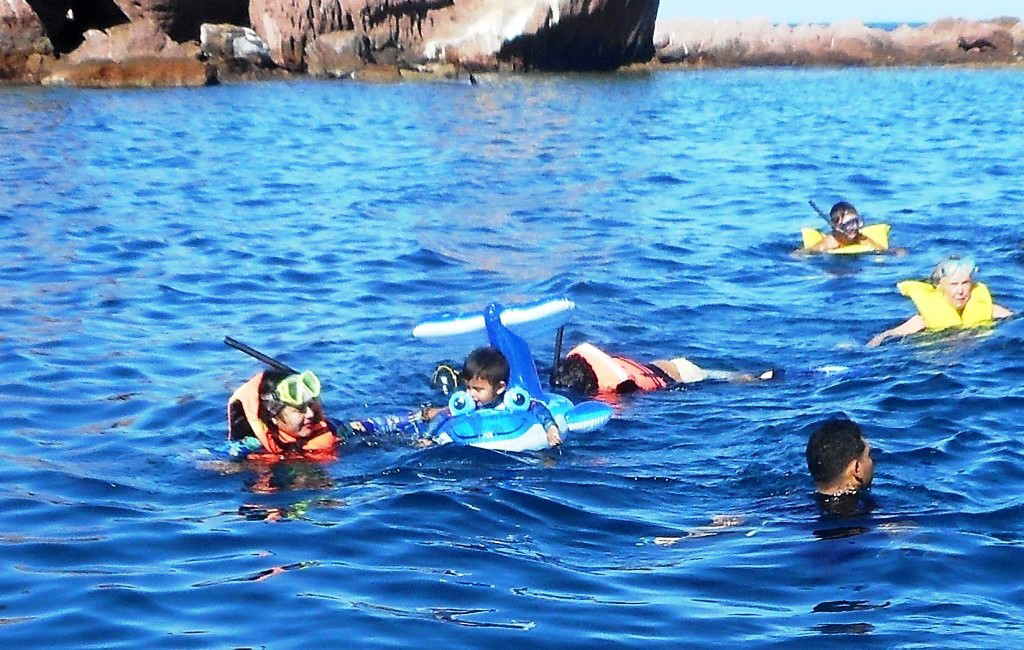 Although food and beverage vendors usually appear on the weekends, there are no established restaurants or palapas on site, so it is best to bring a box lunch or food to cook at the BBQ pits at the south end of the beach. Balandra is normally a much quieter beach where local young people and families go to enjoy the day to themselves. Parking is limited compared to the available sand space. The continued existence of Balandra may be in question as developers threaten to change the bay for commercial development. It is a hotly debated issue in La Paz right now, as to how to legislatively block the development of the bay.

Playa Pichilingue is actually located in little or Viejo Pichilingue Bahia. Historically, La Paz is reported to be the first place at which the Spanish landed, as early as 1533, by Fortun Jimenez, a mutineer. The actual landing was the dock area in Pichilingue and this includes the later expedition led by the great Spanish Conquistador, Hernán Cortés, himself attempted to establish Baja’s first settlement in the La Paz area in 1535. Pichilingue, 16 km north of La Paz, was known for its preponderance of oys-ters bearing black pearls at the time of the Spanish invasion. In 1940, a disease killed them off, leaving the beach deserted. Pichilingue curves northeast along the bay to the terminals where the ferries from Mazatlán and Topolobampo arrive and many of the sport fishing boats depart.

Today, it’s a pleasant place to sunbathe and watch sport fishing boats haul in their daily catches. Locals set up picnics here on weekend afternoons and linger until the blazing sun settles into the bay. One downside to this beach: traffic buzzes by on the nearby roadway. The water here, though not particularly clear, is calm enough for swimming. Restaurants consisting of little more than a palapa over plastic tables and chairs serve oysters diablo, fresh clams, and plenty of cold beer. We actually camped on this beach in 2005; however, development prohibits this now.

The Baja Ferry has two routes to and from La Paz. One route from Topolobampo (the closest ferry terminal to Los Mochis on the mainland), the other destination is to Mazatlán. El Tecolote is a common staging area for those getting ready to take the ferry or arriving from mainland Mexico. Taking your RV to the mainland is expensive, and you require lots of time to sort out tickets and TIP. Depending on what ferry you end up on will determine your departure and arrival time. Taking pets can be an issue as you cannot visit the car deck when the sailing com-mences.

Unfortunately, the Baja Ferry website sucks and is almost unusable. Also, important to remember, is that your RV fee does not include a bed and cabin. However, you do get allocated a seat that is similar to a cinema seat but reclines. If you want to lie flat and/or avoid the noise of others, you can upgrade to a 4-berth cabin.

There are three options: an interior cabin, an exterior cabin or the most expensive, a suite cabin. You have to book the entire 4-berth cabin rather than being able to bunk in with others. Al-so, you need to book far (weeks if not months) in advance to get a cabin. In 1985, we took the ferry from Cabo San Lucas to Puerto Vallarta (service ended in 1992) and we selected a cabin. The pesos exchange rate was $800 pesos to $1 USD, it cost us $25 USD for the 23-hour trip.

Every winter, 100,000 RV Snowbirds dry camp in the Arizona desert near Quartzite because it almost free and always freezing. We prefer the much warmer comforts of Playa El Tecolote, even with the wind. 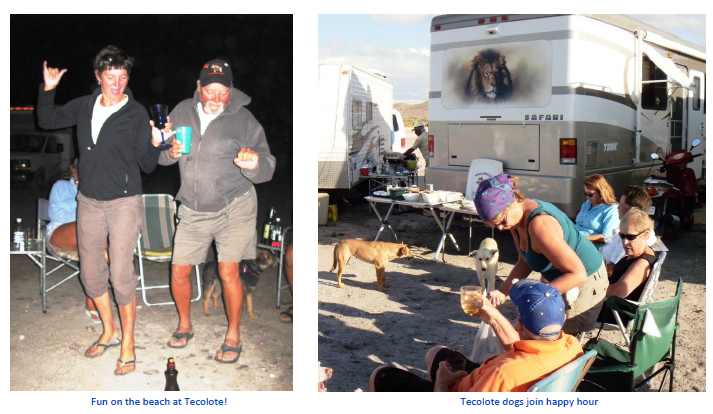 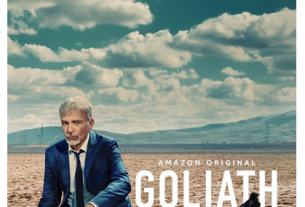 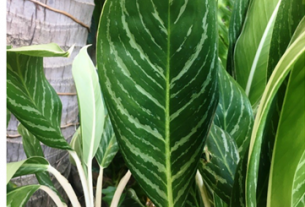