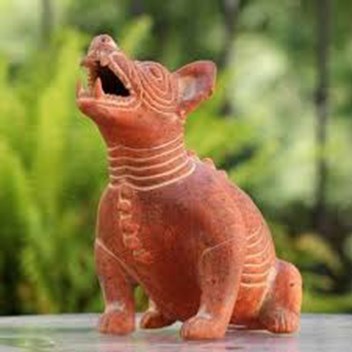 By Kirby Vickery on the July 2019 Edition

The dog figures prominently in Mesoamerican Folklore so much so that in many versions of the 20-day cycle of the Mesoamerican calendar, the tenth day bears the name “dog”. This is Itzcuintli in Nahuatl, the language of the Aztecs, Tz’i’ in the K’iche’ Maya language and Oc in Yucatec Maya. However, among the Mixtecs, the tenth day was taken by the coyote, Ua.

The Ahuizotl
The creature of Aztec mythology is included within Book 11 of the Florentine Codex which describes the Ahuizotl as “…very like the teui, the small teui dog; small and smooth, shiny. It has small, pointed ears, just like a small dog. It is black, like rubber; smooth, slippery, very smooth, long tailed. And its tail is provided with a hand at the end; just like a human hand is the point of its tail. And its hands are like a raccoon’s hands or like a monkey’s hands. It lives, it is a dweller in watery caverns, in watery depths. And if anyone arrives there at its entrance, or there in the water where it is, it then grabs him there.

It is said that it sinks him, it plunges him into the water; it carries him to its home, it introduces him to the depths; so its tail goes holding him, so it goes seizing him …[When the body is retrieved] the one it has drowned no longer has his eyes, his teeth, and his nails; it has taken them all from him. But his body is completely unblemished, his skin uninjured.

Only his body comes out all slippery wet; as if one had pounded it with a stone; as if it had inflicted small bruises … When it was annoyed had caught no one, had drowned none of us commoners then was heard as if a small child wept. And he who heard it thought perhaps a child wept, perhaps a baby, perhaps an abandoned one. Moved by this, he went there to look for it. So there he fell into the hands of the auítzotl [sic], there it drowned him…”

This is the closest to a written account of the mythological beast. Though there are many who do not believe such a beast was just a myth. There are some who believe that it was a type of otter, possibly extinct in our days. This would account for the beast, but not some of the stories surrounding the creature (such as the drowning of, eating the teeth, nails, and eyes of its victims, or the hand at the end of its tail)

Only one other thing to note about the Ahuizotl. An Aztec ruler, Ahuizotl, took the beast to be his mascot, so to say, and named himself after this beast. The king’s rule began in 1482 and was marked with the military expansion of the Aztec empire. He was also known for expanding the Great Pyramid in Tenochtitlan. It is believed that he ordered the sacrifice of 20,000 people during the dedication of the Great Pyramid. He died in 1502. The Aztec people continued to believe in the Ahuizotl and the stories behind the beast.

While belief in this creature has greatly diminished, there are a few that still believe that it is waiting there and will snatch those who mean to do harm to the creatures of the water. 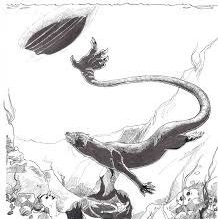 Historically, there were three types of dogs developed in the pre-Columbian times. The first was a small-sized, furred dog called ‘Itzuintii.’

The second was our medium-sized, hairless puppy known as Xoloitzuintii. And the third was a short-legged Tiachichi, now extinct. However, almost universally the Dancing Dogs of Coli-ma are mistakenly identified as Xoloitzuintii, the hairless kind. More, I think, for commercialization than anything else. They were first bred in Comala, Colima and are used for the theme for the Colima Dancing Dogs.

The Aztecs believed that dogs enabled the souls of people into the afterlife by carrying them on their backs. This could explain why both statues and real corpses of dogs are being found in their tombs throughout Western Central Mexico.

The Regional Museum in Colima is small but informative. They show an ancient civilization in this area (2500 BC) which was related to South American and/or Pacific cultures (as evidenced by deep well tombs which are not found in other parts of Mexico). The most striking artifacts are ceramic dogs (including a charming pair of dancing dogs).

As far as the ‘teui dog’ goes, as mentioned in the Codex; The word’s meaning has grown beyond a means to find the original dog species. For example, Tan Teui is a famous traditional Kung Fu form practiced throughout China and traces its origins back to the Shaolin. The word “Teui” is currently used in several hashtags on Twitter and Facebook, to various fashion companies and styles, with others showing a particular style of art.
Just looking at the Codex’s description could lead one to believe the original dog could have been crossed with a small fox, another Central American carnivorous animal.

When I started this article, I had never seen a Mexican Hairless or Xoloitzuintii (shortened to Xolo in some cultures). I thought they were the size of a skinny Basset Hound or larger. So, I was very surprised to learn that they can be the size of a Chihuahua all the way to a medium-sized dog.

They are the national dog of Mexico, originally Chihuahua dogs with a defective hereditary chromosome. They are one of the world’s oldest and rarest breeds, dating back over 3,000 years.

Here I am, in the middle of the State of Washington, and having just written about the breed, when I saw my first Xolo hanging out of a car window in the middle of a Wally World parking lot. At first I thought that it was a black, shaved, Chihuahua, until his owner acerbically set me straight. 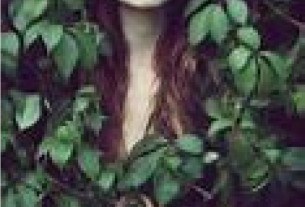