By Suzanne A. Marshall from the June 2012 Edition

During our winter sojourns to Manzanillo, my husband and I like to take a few trips down to El Centro on the bus, have brunch under the umbrellas at the Chantilly sidewalk café (they serve really yummy bread) and explore the shops in the area. We’ve found a terrific local vegetable/fruit/meat market hidden away a few blocks in from the bay too. The café is quite picturesque being directly across from the bay and the public park square with its wrought iron benches and the giant blue sailfish welcoming container ships and cruise lines to Colima. If it’s a Saturday, there are throngs of locals with children in tow so I love to watch them mingle about. Life is different but the same no matter where you are.

It’s a week or so before Carnival and there seems to be a bit more activity than usual. In front of the City Hall there is an information table with an assortment of brochures on shows, and activities that will take place during the week of Carnival. As I peruse and ask a few questions, a man standing by the table offers some insights about Mexican culture in impeccable English. I find myself immediately engaged by him as he talks about the naming of cities in Mexico and of course the history of Mexico is never dull.

By now, my husband has headed for the café to grab an outside table which is only a few hundred feet away. I’m feeling a bit pressed to move on and join him, though as I say, this man is extremely interesting to listen to. I realize now that he is not part of the information service so I ask his name and he tells me it is Joseph. Because I would like to hear more about Mexico and perhaps his life here I invite him to have a coffee or something while we have our lunch. Allan is a bit shocked when we join him at the table and I make introductions. By now I know that he was a university professor and writer born in Mazatlan and making sense of his command of English and the ready details of local history. He is interested in where we are from, which we explain is Canada and of course it is no surprise to him why we love to spend winters in Manzanillo. As our lunch arrives he continues to capture our interest with his stories.

Joseph is in his early sixties, clean and well- dressed though extremely thin. As we enjoy our lunch and I encourage more stories about his life. He reveals that he can no longer teach and of course I press for more details. Apparently influenced by friends of his many years ago, Joseph had made a life altering decision to go to Colombia with them in some military (or perhaps guerilla) capacity where ultimately lives were lost and his name was now in police records. The temptation to make this bad decision was of course because they were paid very well to be involved and the wages of a university professor are adequate but meager. He wanted to get ahead and the money was great temptation. He was now working at the port doing bits of paperwork and translations but the hours were minimal and I gathered he was really struggling to have a life. Joseph could not seem to start over anywhere as the police records showed up wherever he went and he could not get the jobs that he really qualified for.

Out of the blue my intuitions kicked in and I found myself asking Joseph if he was hungry. There I was stuffing my face enjoying a great meal while he sat with his black coffee. I had assumed that he would order a meal for himself if he wanted to but was just having coffee while we chatted. Making direct eye contact with my question, he was caught off guard and tried to hold back tears that had welled up in his eyes. But as the tears rolled down his cheeks he bowed his head and quietly said “I am so ashamed”. I tried to comfort him without further embarrassment but of course it was an awkward situation and there was not much I could say other than everyone makes mistakes in life they wish they could undo. So I asked him to allow me to buy him lunch and requested another menu from our server who graciously pretended to see nothing. I encouraged him to try a couple of items on the menu that we had enjoyed before. But he explained that he must be careful to order something easily digestible or his stomach would not hold it down.

Now I really felt badly, and so did he. I have experienced a similar situation back in Canada and I know that people who have not eaten properly in a long time must introduce food slowly and carefully into their digestive tract or risk vomiting and cramping. So I gave him lots of time to choose and sent my husband off to the watch repair which would be closing for siesta soon. When his meal arrived, his continued embarrassment was evident and I sensed that I must leave him now. I encouraged him to take his time and what couldn’t be eaten could be taken home for later. He said thank you and having paid the tab, I walked away up the street feeling very perplexed and sad.

There are people in my life who would call me gullible including myself. I tend to believe first and doubt later. At least that way, I give everyone an equal chance to be genuine up front. I have had very few disappointments, though admittedly, a few. Most people are good to the core and some have been tainted by life. Very few are artful dupes who make a living feeding off stories of hardship and bad luck to support drug or alcohol problems and so on. I am positive that this lovely man was genuine.

Joseph lingers in my mind. I suppose that’s obvious as I write this story today about something that occurred months ago. I wish him well and hope that somehow his life will turn around for the better and I am so glad I offered him a meal. Perhaps that small act of kindness will have helped him turn a corner or renew a belief in him that people, even perfect strangers, can show some humanity and understanding in the smallest of ways.

Since then I have taken an interest in the past politics and activities of Colombia. Over the past decades there is much to read about involving their government forces, lawful and unlawful guerilla warfare and involvements with the U.S.A. and Mexico. It isn’t a big stretch to assume that Joseph was speaking the truth. 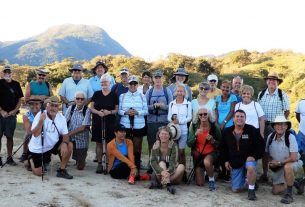