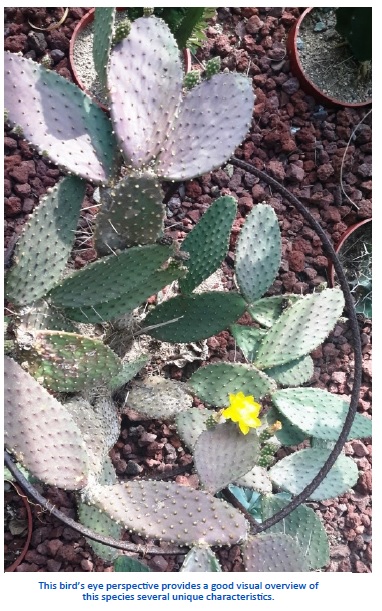 (From the very outset, I acknowledge that far be I from any manner of a sage of succulents or cacti fact guy. Thus, it should surprise no one that, for me, striving to correctly identify this has been interesting and somewhat challenging.

My initial search was probably no different than might have been yours a rather careful perusal of Simon & Schuster’s “Guide to Cacti and Succulents.” Of their thirty-two featured Opuntia species, I carefully winnowed my options to those from the general Central Mexico area whose coloration, pad shape and natural/composition of spines seemed similar to my specimen.

Then, I moved on to more scholarly tomes and some eye glazing, sleep inducing scientific, scholarly articles ranging from chemical composition to anti-fungal properties, through tissue cultures and mineral content to forage production for specifics.

So, what’s the present bottom line? I’m quite confident that this is some manner of Prickly Pear species. As to saying absolutely, irrefutably, without any manner of question or doubt as to which specific species, well . . . . . . )

My first identification consideration was that it was the Opuntia ficus indica which are indigenous throughout Tropical America. One reason that this seemed a good candidate was that the pads of one of its several varieties take on a more reddish hue, as have mine. However, while its large flowers (mine are more mid-sized) are yellow in color, generally their stamens are as well while the centers of mine are green.

Next I looked at what with consideration of its flowers has been described as “one of the most beautiful members of the genus” the, also yellow-flowered, Opuntia gosseliniana. But, during the course of careful perusal, I noted that its pads are more discshaped. Opuntia tomentosa became my next candidate, but then I realized it sports flowers of orange-red with red perianth (the outer part of a flower) segments. Then, upon first seeing the flowers of the Opuntia humifusa, my initial inclination was “Eureka, I’ve found it!” But, no, I realized that its flower petal tips were markedly different. Next, I pondered the Opuntia azurea, along with several of its sub-species: Opuntia azurea aureispina, a. discolor, a. azurea, a. diplopurpurea, a. parva or a. arueispina.

At that juncture, I stumbled upon two exceedingly seductive possibilities with (like mine) purple tinted pads Opuntia violacea and the Opuntia macrocentra, and, in all honesty, am not sure that, in the final analysis by botanists far smarter than me, mine might not, actually, be one of these species! However, ultimately, through no little time spent with an array of cactus collection books with all plant aspects scrupulously scrutinized and compared, the Opuntia leucotricha seems most viable as my blooming a word selected for both its vernacular and literal connotations cactus!

Generally speaking, the Aaron’s Beard Prickly Pear is native to my earlier identified search area central Mexico where they naturally occur in the states of Aguascalientes, Guanajuato, Hidalgo, Jalisco, Nuevo León, Querétaro, San Luis Potosí, Tamaulipas and Zacatecas. As a rule, they are cultivated, at an altitude of 1500 to 2500 meters above sea level, both in Mexico and in the Mediterranean area, as forage for animals and food for humans. But, as is all too often the case, no one can be loved and appreciated by everyone in Florida it’s considered an invasive species! (Such gives one pause to wonder who is really the prickly one there the people or the plants?)

So what of this Opuntia cactus genus? Prickly pears that which virtually all in this genus can be called are also known as Tuna (fruit not fish), Sabra or Nopal. There are somewhere between 150–180 species of these cacti growing from western Canada almost to the very tip of South America. They range from small low-growing shrubs to treelike specimens reaching sixteen feet (4.57 meters) or more in height.

According to the Encyclopedia Britannica, “Opuntia are composed of flat joints, with paddlelike cladodes (photosynthetic stem segments) . . . They readily reproduce asexually and the paddles can be easily rooted for cultivation. . . . (these) clad-odes bear characteristic glochidia small bristles with backward backward facing barbs in the areoles. (These barbs are difficult to remove from human skin.) Their showy flowers are commonly yellow, pink, or orange in color, and many feature stamens that move in response to touch, a trait believed to increase the pollen load of insect pollinators.”