By Terry Sovil from the September 2017 Edition

We’ve had a lot of big waves this summer. It’s made diving difficult! I started to wonder where they came 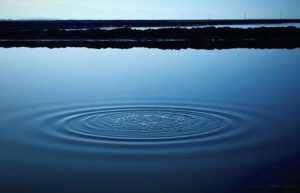 from. Could it be all of the storms and hurricanes? At one point we had 5 “disturbances” lined up like a parade. None came close to shore. I wondered if these winds could generate waves. I hoped to find a simple table: this size hurricane goes by this far out to sea how big would the waves get and how far would they travel? I found out it isn’t as simple as that.

I had to start with the basics. Here’s a good analogy. A small quiet pond with no wind. You throw a small pebble into the water. It sends out ripples which move in all directions from the point the pebble landed. The ripples travel until they contact land. Four things happen: 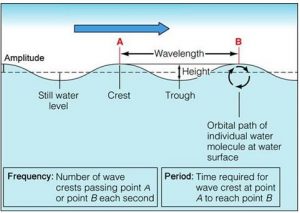 Once the pond is calm, throw in a bigger rock. You get bigger ripples with a larger height, moving faster. If you toss in an even bigger rock, bigger and faster waves. Now you know the basics of waves! So if our pond is the ocean and our pebble or rock is a storm, the same concepts apply but on a much bigger scale. Our pond is now 3,000 or more miles (4,828 kilometers) and the rock is 500 miles (804 kilometers) wide.

A storm makes waves just like the rock. It uses mass to move and displace water. Most waves are wind driven. Waves are created by energy passing through the water. Wind-driven waves, or surface waves, are from the friction between the wind and surface water. This causes it to move with a circular motion.

Molecules of air in the wind rub against the surface of the water. This causes water molecules on the surface 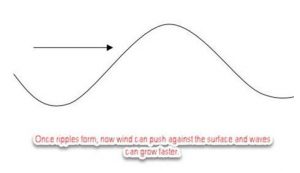 to move in the direction of the wind. As water molecules start to move, they collide with others and they begin to move. As the air continues to move, so does the water. Basic friction. Waves are transmitting energy, not water.

Waves can also be created by the gravitational pull of the moon and sun. These are tides. Tides impact the water depth and will cause water movement or tidal waves. The flow of waves and tides are what makes our ocean move. It is a common misconception that a tidal wave is also a tsunami. The cause of tsunamis are not related to tides at all but can occur in any tidal state.

With a hurricane, the strong winds can cause a storm surge, a series of long waves created out at sea, far from shore, and in deep water, so they intensify as they move closer to land. A hurricane forms and the water looks like that in a washing ma-chine, all waves and heights are mixed together. But as the waves travel, they tend to separate and stabilize as they move away from the generation area. This is called dispersion and, over a distance, they stabilize into the normal waves we see coming into shore.

Three factors influence the level of energy in swells: Wind velocity, wind area (fetch), and duration. In a different description: the speed of the wind, the amount of ocean surface affected by the blowing wind in the same direction (fetch) and the amount of time these winds blow over the same part of the ocean. Winds blowing at maximum velocity over thousands of miles in the same direction for days on end would create big waves. But our atmosphere is dynamic and rarely do such conditions last for very long. 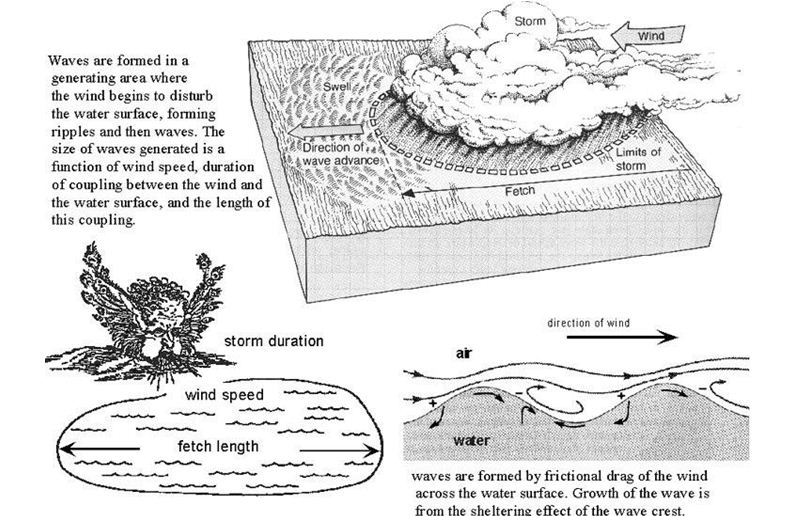 Ground swells from winter storms off New Zealand may travel over 6,000 nautical miles (11,112 km) to reach the beaches of Southern California!

I never really found my simple table, however this answered my original question: “Waves without an obstruction can travel across an entire ocean!”

The Uniqueness that is Manzanillo