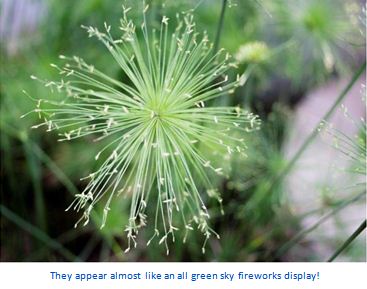 By Tommy Clarkson from the September 2017 Edition 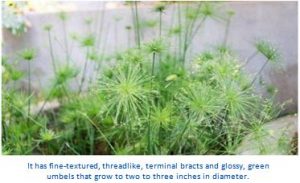 (Like so many things in life today, every day, change seems the absolute constant. Hence, names of plants – be they common or Latin – are often subject to new data, more recently completed research or, sometimes I suspect, the simple whims of botanists. Such is the case here. No few “authorities” contend that this plant is but a sub-species, variant or cultivar of the Cyperus paprus. But, according to the Royal Horticultural Society, this is a Cyperus isocladus. In at least this case, I go with the Brits!) 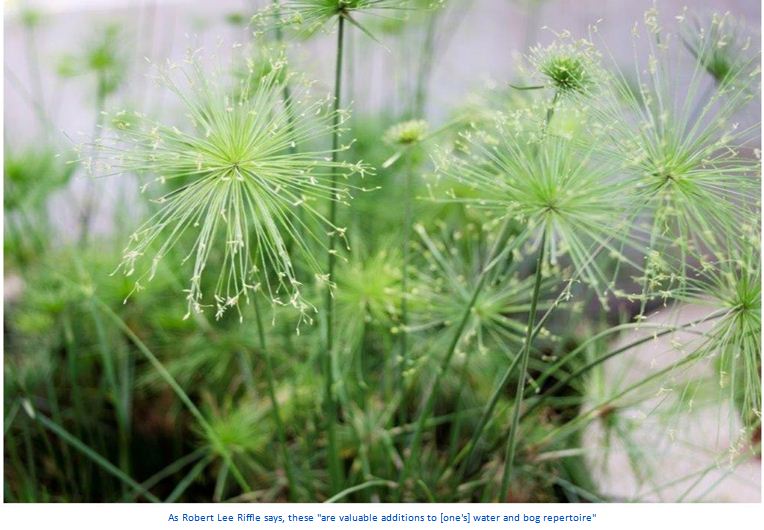 The two best-known plants of the over 600 herbaceous sedge species in the Cyperus genus are the Cyperus paprus and the Cyperus involucratus or C. alternifolius. Well, (enter stage left) allow me to introduce a new character in our aquatic loving family – the Dwarf Papyrus. Upright, arching and just as cute as the proverbial button, this small, mesic (appropriately meaning “adapted to a moderately moist habitat”) plant does, indeed, look like a miniature version of its large cousin of “source of paper” and Moses’ river basket renown.

Any of these – as stated by Riffle, “are valuable additions to [one’s] water and bog repertoire”.

The Dwarf Papyrus naturally occurs along the east coast of Africa, from Kenya south through the northern areas of Eastern Cape, as well as on Madagascar and the three Mascarene Is-lands in the Indian Ocean, between Madagascar and India and above Australia.

Like its kin – the fast spreading, “bold, noble and exotic” Giant Papyrus, Egyptian Paper Reed or Egyptian Papyrus – the soil in which the Dwarf Papyrus grows must remain constantly wet. All the earlier-mentioned varieties can thrive well in water as shallow as a few inches. So, if you have any of them, just keep their surrounding soil or rhizomatous root mass wet. They are comfortable in a pot, along the edge of a pond, or even in a pond itself. But, while it’s imperative to keep their feet wet, their crown should never be covered in water.

With further regards to those papyrus homesteading locales, if placed into a pot, you might wish to plug the hole(s) in the bottom to effectively maintain the necessary wetness within.

As a full-sun loving, grass-like plant, you should remove its foliage once it browns. Keep in mind that evergreen grasses don’t go dormant. So, if planted in environs where the temperature drops below freezing, don’t expect it to be around for growth in the springtime. However, down here where winter temps seldom drop below 65° F (18.33° C) it’s considered a perennial. 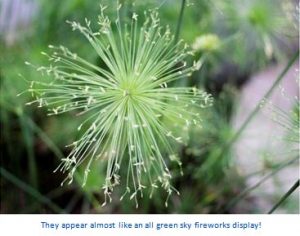 By way of description, it has fine-textured, threadlike, terminal bracts and glossy, green umbels (an inflorescence which con-sists of a number of short flower stalks, which, in turn, are called pedicels) that grow to two to three inches (5.08 – 7.62 cm) in diameter. A simplistic description I heard, and found quite apt, is that the Dwarf Papyrus has a “buzz cut” instead of the longer, flowing “lion’s tail” of it larger relations.

The inflorescences are intermingled with, and surrounded by long, linear, leaf-like bracts atop leafless stems with sheathing leaves only at their base. The flowers of the Cyperus isocladus are borne in brown spikes. It grows to a height of a foot to a foot and a half (30.48 – 5.72 cm). Its delicate evergreen appea-ance stems (forgive the pun) from slender stalks and flower spikes that create an umbrella-like appearance.

Remember the negative implications of the old adage about a “family divided?” Such applies to the Cyperus isocladus. Accordingly, know that separating clumps in order to propagate them will wound the base plant.

Should propagation be your plan, there are several courses of action: By dividing rhizomes, tubers, corms or bulbs (but re-member my counsel, above, regarding this method), from seed, or simply self-sows, which it does rather freely. This happens in that it is viviparous (a plant that produces seeds that germinate before they detach from the parent).

Another plus for this little guy is that the Dwarf Papyrus is, virtually, pest and disease free.

In encapsulating conclusion, as a growing plant, this is great in or near small pools, ponds, botanically landscaped bogs, pots or tubs. It can also be a wonderful choice for inclusion in fresh or dried flower arrangements.

So, you see, there’s nothing really small about this dwarf! 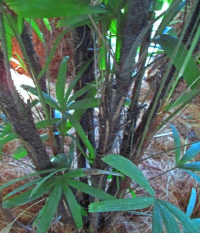