By Suzanne A. Marshall from the February 2013 Edition

Sitting on my small terrace one morning having coffee, I thought I heard the hum of a bumble bee in my bougainvillea, which were in full bloom with brilliant fuschia colored flowering branches cascading down over the planter. As a bumble bee lover, I got closer to have a look only to see the tinniest of hummingbirds poking into the blossoms. With a flit and a hum it was gone faster than my eyes could follow.

Now this was a big thrill for me since even at home in Canada, we put out hummingbird feeders and plants that will attract them just to see the little critters in action. I have never had much luck being in a spot to seem them when they flitter along. So to see one in Mexico has raised my hopes that maybe they’ll be regular visitors.

Since then I’ve learned a few more things about hummingbirds of which there are 50 species found in Mexico out of 320 different species worldwide. The tiny bird that I spotted for a few moments could have easily been the Calliope hummingbird.

The Calliope is the smallest breeding bird found in theU.S.A. and Canada. Like me, it has the ‘smarts’ to head down to Mexico for the winter. This little bird was named after the Greek muse Calliope and means ‘little star”. The adult male has wine-red streaks on the throat and a dark tail with white tips. He can measure 7 -10cm in length (2.8 -3.9 in.) and weigh 2-3 g (0.071 – 0.11 oz.). They are believed to be the smallest-bodied long distance migrant in the world. 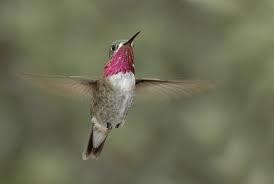 Hummingbirds are amazing stunt flyers. They are able to fly not only forwards, but backwards and even briefly upside down. They can also hover for extended periods of time. Their wings flap rapidly at about 80 times per second which produces the characteristic humming sound. They lead very high pressure lives, with astonishing metabolic rates and huge hearts relative to their size and must pound more than 1200 times a minute when active. To support these extreme energy expenditures, hummers eat about half their own body weight in sugar each day, mostly from flower nectar though they also like small insects and mites. “To put their eating requirements into perspective, a human equivalent would have to eat about 130kg (285 lbs.) of hamburger meat each and every day!”

Nature being the ultimate wonder, the hummers’ metabolic rates and body temperatures drop at night, allowing them to sleep without dying from starvation. In extreme circumstances, if resources are scarce, hummers go into torpor (stagnation) for up to 14 hours to conserve their last remaining stores of energy.

Indigenous Mexicans regarded these amazing little friends with awe. “In the Magliabecchiano codex (dating from the mid-sixteenth century and now in Florence, Italy) an Indian artist depicts the god, Quetzalcoatl with a feathered headdress. The Aztecs dedicated one of the buildings in their ceremonial center at Tenochtitlan (the forerunner of Mexico City) to the “cut-off hummingbirds head”. They also believed that the souls of warriors who died in battle, and whose daily task was to transport the sun from the underworld to its mid-day zenith, turned into hummingbirds as they handed over the sun to the Cihuatateo, the souls of women who died in childbirth.”

“West of the Aztec empire, the Tarascans named their capital city, “Tzintzuntzan”, place of the hummingbird, an onomatopoeic rendering of the sound of their call.” And now, through the research and writing of this article,I’ve happily added ‘hummingbird feeder’ to my shopping list in hopes that I might lure more regular sightings of these captivating little creatures.

Orchids/Dendrobium- I Planted Roots in Mexico