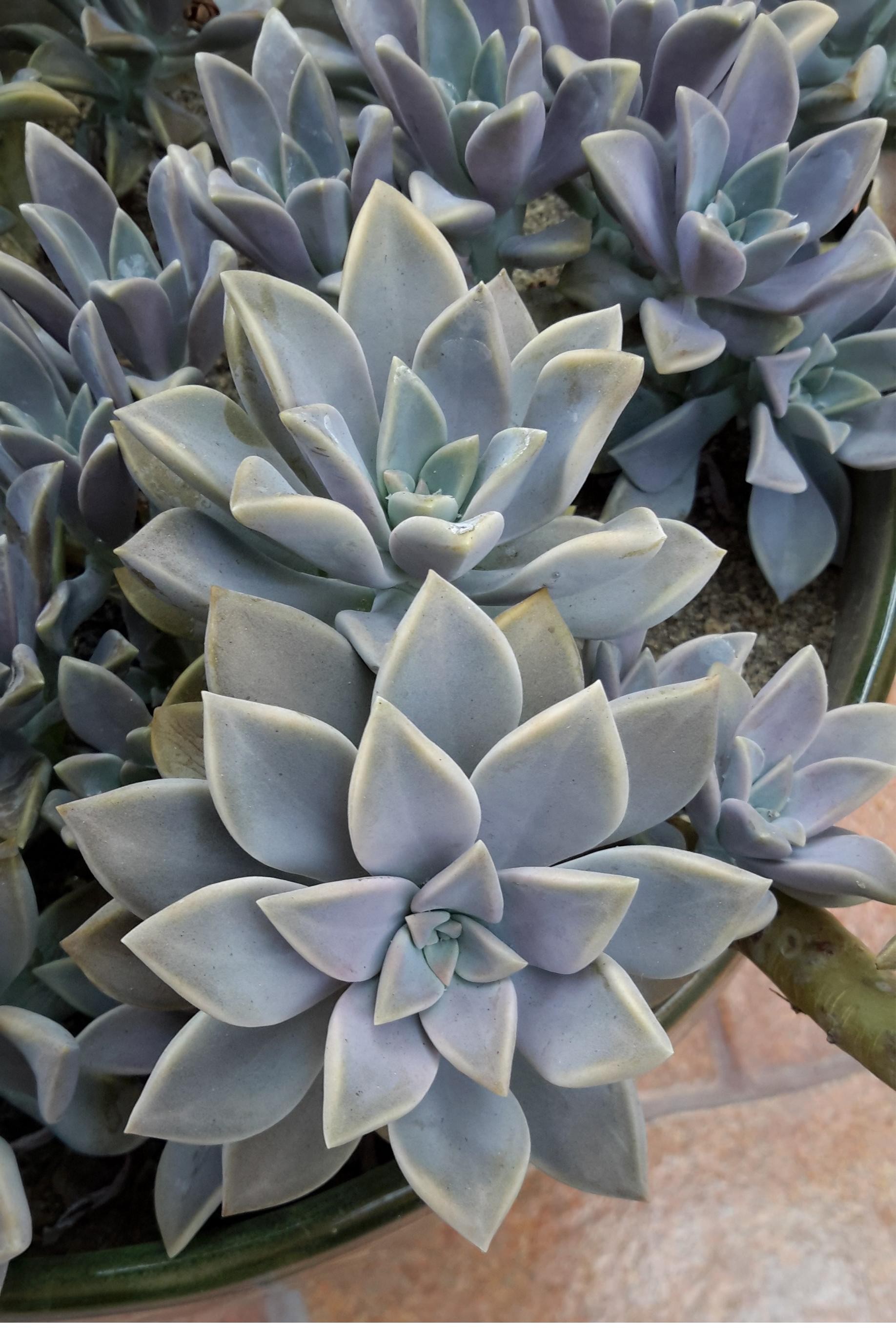 By Tommy  Clarkson  from the July 2018 Edition

(After delving deeply into, and all but rabidly rooting through, my little library of botanical books, I thought I’d finally identified this attractive succulent as a member of the Crassulaceae family (the Jade Plant clan) and was wondering if it was in the echeverias genus (which I learned later, looks very much like these). My pal, Dr. Mark Olsen of the Institute of Biology at the University of Mexico, cautioned me saying that “this family is fiendishly complicated in Mexico”.

So warned, I searched further, zeroing in on my target plant, suspecting, with more than a modicum of assuredness, that it might be a Pinwheel Aeonium, (Aeonium haworthii). Well, while not a bull’s eye, direct botanical identification hit, in Army parlance, I was hand grenade close. I only missed the specific species name and its genus . . . well, let’s make that 155 mm artillery round close!)

Graptopetalums, as a genus, are chameleonesque. If grown in partial shade, they are whitish-blue. However, if their home is under a full, hot sun, they tend to take on a pinkish gray to yellow coloration. This species may have derived its name from that grayish white pallor its pudgy, opalescent leaves can sport. In actuality, this is caused by a powdery coating called pruinose that covers its leaves. This is what provides much of the “ghostly” appearance. 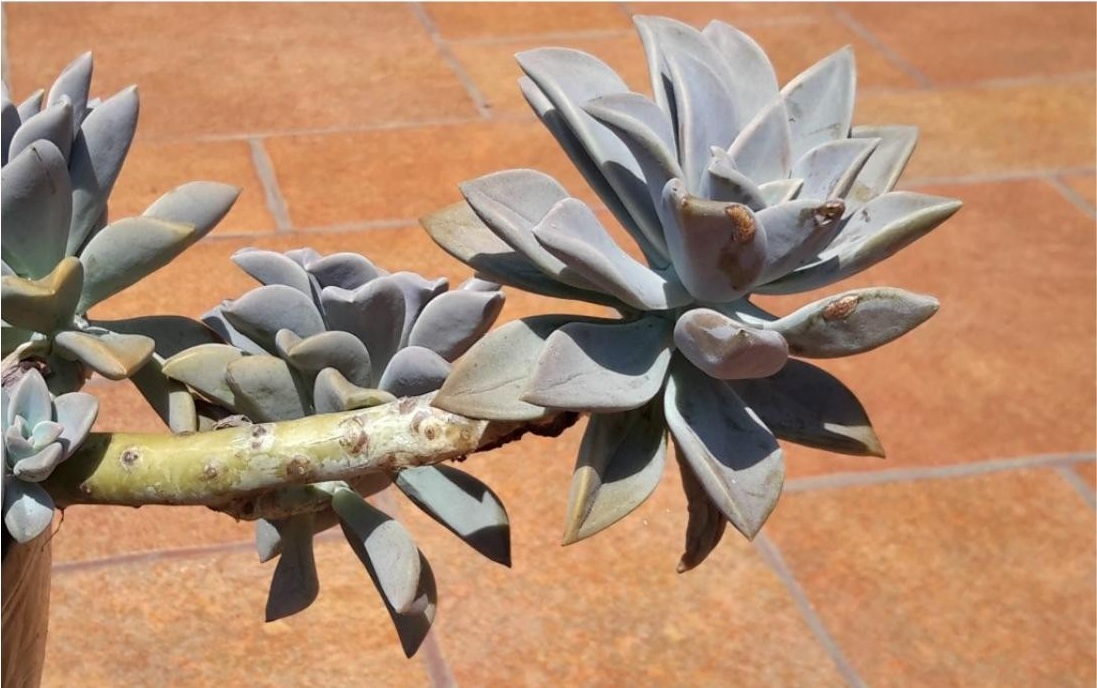 But don’t let their name fool you. Ghost Plants are survivors.They’re hardy, easy to grow, capable of sustaining themselves for protracted periods without water, scoffing at mere damaged stems, handling temperatures below freezing and they even ignore name calling and bullying! (An answer to the former is that their thick leaves hold excess moisture in order to withstand protracted periods without rain. As to the latter, it has a very strong spirit and confidence, no self-doubt whatsoever and a good positive image of itself!) By the way, don’t let their Latin name misdirect your botanical origin thoughts  they’re native to Mexico, not Paraguay.

While most all of them will grow to be one foot (30.48 cm) tall and around two to three feet (60.96 – 91.44 cm) wide, each is very proud of its own, personal, self-identity and enjoys opportunities to be unique. Because of differences in sun exposure, quality of soil and amount of water, it is not uncommon for Graptopetalums specimens to look like entirely different plant species even when growing but a few feet from each other.

Attractive, four inch (10.16 cm) rosettes grow at the tips of their ever-lengthening stems.

With time, these will become pendant. (Aha! A good cascading candidate for a hanging pot!). But, keep in mind that their old leaves wither and fall off with new growth only, coming from the center of each rosette. This can lead to a somewhat awkward-appearing, denuded, long stem with an attractive rosette, comprised of overlapping, rounded triangles at the end. Hey, worry not, you can simply clip it off or, as branches of virtually all Graptopetalums detach readily, simply snap one off and start a new specimen elsewhere! In line with that, leaves and cuttings also root effortlessly. (This all is called vegetative reproduction, by the way.)

Some gardeners like to keep their ghost plant trimmed in order to maintain a fuller shape. But, for the sake of attaining a different – but intriguingly attractive look, I might suggest that you allow it become “leggy” so that its twisting stems climb out of the pot and cascade down and around. And don’t think that these interesting plants are not without their flora. Around spring, you may look forward to dainty sprays of starshaped white to yellow flowers. (I’ve also read in some commercial, botanical venues of pink or red flowers, but have not seen such.)

In the right garden setting, Graptopetalums can be effectively employed as groundcover. But, like all their not so touchy feely, succulent relations, they similar to the early colonists actively assert, “Don’t tread on me!”

As to where they prefer to plant their roots, the soil should be sandy and dry with a medium amount of moisture. They are wonderful in rock, succulent or Mediterranean gardens but, while disease free, watch for mealy bugs, vine weevils and aphids.

I have seen nurseries describe the Ghost Plant as a “tender, soft succulent.” Ya’ know, there are a lot worse things to be said of one!