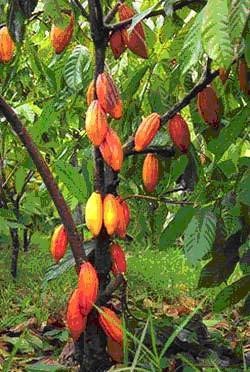 By Vivian Molick from the November 2010 Edition

“What is the meaning of life? All evidence to date suggests it’s chocolate.” ~Author Unknown
There is something so special about chocolate that the average person in the United States eats 10 pounds (4.5 kg) of it every year!

Chocolate has its beginning with a tree called the cacao tree ( cacao). This tree was discovered aboutTheobroma2,000years ago in the tropical rainforest regions of Mexico, Central and South America, climates within 20 degrees north or south of the equator. In the rainforest the tallest trees can grow up to 150 feet and form an upper canopy, which shades smaller trees like the cacao beneath them in what is called the ‘understory’. The tree produces a fruit (pod) about the size of a small pineapple throughout the year. The pod contains 20-50 almond-sized seeds, sometimes called , which are very bitter, embedded in a sweetcocoa beanspulp. These pods have very thick exteriors and don’t open naturally to release their own seeds and must rely on the sweet pulp to lure birds and mammals to pierce this tough skin. When they do, they spit out the bitter-tasting seeds, which fall to the ground and are then able to sprout new cacao trees.

Cacao trees flower continuously once they reach maturity (approximately 5 years). The delicate, waxy pink or white five-petaled blossoms are found in small clusters on the auliflory
trunks and lower branches of the tree. This phenomenon is called , and is quite different from other trees that produce their flowers and fruit only on the tips of the smallest branches.

The earliest known people to have discovered the secret of cacao were the Classic Period Maya (250-900AD) by evidence of chocolate in glyphs and actual remains in ancient vessels… and so the history of chocolate begins. The Maya and their ancestors in Mesoamerica harvested the fruit (pods), fermented the seeds,

roasted them and ground them into a paste. When mixed with water, chili peppers, cornmeal, and other ingredients, this paste made a frothy, spicy chocolate drink by pouring it back and forth between two containers. Chocolate was a treasured Maya treat and many artifacts are painted with scenes of people pouring and enjoying it. Although it has been used as a drink throughout history, the beans were also used as currency.

The beans were still thused as currency in parts of Latin America until the 19 century. The Aztecs conquered the Maya and Cortez conquered the Aztecs, but kept using cacao as currency. Europe’s first contact with chocolate came during the conquest of Mexico in 1521.

The Spaniards recognized the value attached to cacao and observed the Aztec custom of drinking chocolate. beaten drink (It is believed that the word “chocolate”

came from the Eastern Natuatl word “chicolatl” meaning .) The Spanish began to ship cacao seeds back home and as an expensive import, chocolate remained an elite beverage and status symbol for Europe’s upper classes for approximately 300 years. When the Spanish drank it, they doctored up the bitter brew with cinnamon and other spices, began sweetening it with sugar, and also started to heat it (… sweet hot chocolate was born). Other than adding sugar, little had changed in the preparation of chocolate,although the Spaniards made frothing easier by using a little stick called a (you would place it between your palmsmoandinillowhirl to create the froth… sounds suspiciously close to our café mochas of today).

Eventually, the rest of Europe discovered what they were missing. As chocolate spread throughout Europe, the demand became greater. To keep up with the demand, plantations sprung up, and thousands of people were enslaved to produce the cacao. Instead of relying on the Spanish, the British, the Dutch, and the French started their own plantations, taking cacao out of Central America and planting it in their own territories. Up to this point, most chocolate was made from the variety of cacao called But because beans are easier to grow (though they don’t criollo. taste as good), they were the ones shipped around the forastero globe, marking another turning point in chocolate history. Today, 90% of cacao is of the type.

As prices went down, chocolate became increasingly forastero available to the common person. In the early 1800s, a Dutchman named Coenrad Van Houten, created the cocoa press, which smashed the beans and expelled the cocoa butter (fat), leaving just the cocoa behind. He also came up with a way to wash the cocoa in an alkali solution (hence “Dutch” cocoa) to make it easier to mix with water. In the 1850s, Englishman Joseph Fry changed the consistency of chocolate by adding more cocoa butter, instead of hot water, to cocoa powder and sugar…. the world’s first solid chocolate made its debut. In 1875 Daniel Peter and Henri Nestle added condensed milk to solid chocolate, creating a milk chocolate bar. In 1879 Swiss man Rudolphe Lindt invented the conch, a machine that rotated and mixed chocolate to a perfectly smooth consistency. By 1907 Milton Hershey’s factory was putting out 33 million kisses per day. The popularity of candy bars really skyrocketed after World War I, when chocolate was part of every U.S. soldier’s rations.

For many years chocolate has been more than a food; it has served as a health and beauty aid also. , a chemical found in chocolate, enlarges bloodTheobrominevessels and is used to treat high blood pressure. In addition, cocoa butter is used in cosmetics and ointments – even as a coating for pills. Although it has many health benefits for humans, the can be toxic to some animals, especially dogstheobromineandcats. Chocolate still plays a part in festive celebrations; like Hanukkah, Christmas, and Easter. In Mexico particularly, chocolate is used to make offerings during the ‘Day of the Dead’ festival, a time for remembering loved ones who have died.

“Chocolate doesn’t make the world go ‘round, but it sure makes the trip worthwhile!” ~Author Unknown

The War After Armageddon