By Freda Rumford & Kirby Vickery from the November 2012 Edition

When we took the coffee tour with Jupiter we really did not expect to have such an interesting tour or one that left us with such a thirst to know even more. After all, coffee is coffee isn’t it? It grows on trees in the mountainous zones, ripens, and gets harvested, roasted, then either ground up or sold as-is for the elite to ground up themselves! Not so, my friends, there is so much surrounding the growing of and caring for these innocent little beans. So many people of all social strata become involved in the process to have each of us able to sit down and savour the wonderful aroma and cherish the first taste of a morning’s wake up cup of coffee. These responsible people are to a greater or lesser degree very interesting themselves. We had never thought of anthropology being a subject that we would wish to study, but all of a sudden both of us were looking at that rich, brown, liquid which comes from those little brown beans in an entirely different light.

The towns in which the people live who grow, tend and harvest the beans are small, neat and have the prettiest central “jardins.” These towns are so important in the social life of the inhabitants. Many are nestled under the mostly protective volcano even though the people are warned frequently that there is still a beast residing in its core. The rumblings and spewing of lava periodically, gives special soil and nutrients for the bean to develop to its full potential. When the people clear the foliage for a new field or to re-plant an existing one, they leave the larger shade trees in place while taking out all the underbrush. The protective leafy arms of these larger trees shade the delicate bean and slow its ripening process until it is fully mature and ready to be plucked. Many of the worlds best coffee grows in similar conditions, some of our own favourites include the Blue Mountain and Kona coffees, although these are not produced in the same volume as the Comala coffees.

Mexico’s coffee is now known as some of the best in the world and it is rapidly growing in importance. It will be a long time before it can challenge Brazil’s or Columbia’s coffee yield but it is nipping hard at these country’s heels and making them watch over their shoulder at Mexico. Right now Mexico is slated as either number six or ten in the world market for coffee. This, of course, depends on the person you happen to be talking to. 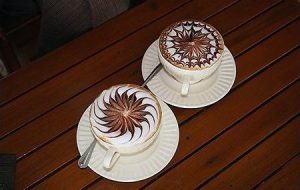 Jupiter told us of the famous Goldsmith family becoming involved in this industry, although almost by default. The Goldsmiths, under the paternal guidance of Sir James (Jimmy) Goldsmith, ventured into the hospitality industry along the Costa Alegre. Jupiter didn’t say it, but we feel that he probably did this in an attempt to expand his holdings to support his many wives, mistresses and children. This region of Mexico is known as ‘The Happy Coast’ (no wonder) and stretches from Puerto Vallarta to Manzanillo.

Sir James first bought into the major hotel, Las Hadas in Manzanillo in its infancy in the 1970’s. Later his daughters purchased other major resorts north of that city in the areas of Jalisco. This section of coastline is just now being looked at very seriously by the Mexican Government as the next area for tourist development. Isabel Goldsmith, bought the small boutique hotel ‘Los Alemandas’ at Quemaro and her sister, Alix Goldsmith, owns the old Franciscan monastery, ‘Hacienda de San Antonio’, north west of Colima where she turned the dusty barns into a very exclusive hotel with it’s own airstrip.

The biggest rumour and gossip we found while researching the area was about the life of Jimmy Goldsmith. He was an attractive man who loved many women, married some and had mistresses on the side at the same time. We believe he invested in coffee for the caffeinated energy boost he surely must have needed. He lived with one during the week and another over weekends and apparently kept everyone happy. It is rumoured that he also had an affair with Frances Shand Kydd, the ex-wife of Viscount Althorp. This little affair (?) resulted in a child. Now this isn’t ancient history folks. That child is Diana, Princess of Wales and mother to the future king of England. Should that be so, then she and then in turn, William and Harry do not have the proclaimed aristocratic blood which came through the late Earl Spencer. At some time we are sure that the National Enquirer will have as much fun with that as they did with Prince Harry’s possible parentage.

All we wanted was a nice cup of coffee and we now have a rumour which threatens the throne of England. Being a Royalist myself, I am just laughing and dismissing it but at the same time felt it interesting enough to pass it on. The really good fact is that Diana and the granddaughter of Sir James, Jemima Khan (nee Goldsmith) were the best of friends and could often be seen laughing and chatting at social affairs. So related or not, Diana did have a good friend.

(Dear reader, you have to read the last three paragraphs with an English accent.-KV)

That was just a little fillip to add to the taste of the coffee from Colima which is good, rich and readily available in Manzanillo at the food court, by the kilo, at the ‘Comercial Mexicana’. The coffee man in the Market in central Manzanillo sells coffee which comes from Vera Cruz.

Surrounding towns on the mountainside

The State of Colima is the 3rd smallest of the 31 states of Mexico in size but second in population with the Baja California having the least. There are 10 municipalities which make up the rural district of Comala.

Comala lies at the foot of the still active Volcan de Fuego and just a few miles away from Colima, the capital city of the state of the same name. The soil of the volcanic mountain is rich in nutrients that aid the fast growing industry of coffee. The Rio Cordovan runs from the volcano through the area forming mountain lakes which, surrounded by trees rare to the area, have been opened as a park and fishing pond for the people of Colima. In the 50 foot deep crater lake, Lago Maria, tilapia and bass live happily and in abundance while providing food and sport for those frequenting the area. One notable plant of the park is the Vermilion Fly catcher.

Comala was chosen to become one of the 2000 magical cities of the world, and is 1 of 55 such towns in Mexico to have that honor. It is deemed magical due to the strange phenomenon of a car parked and placed in neutral will appear to be pulled backwards up a small hill.

Historically small towns in Mexico were all white washed. Comala was one of these towns. However, the town’s people had a small problem with this and sought an easy remedy. Comala began to have every house a different color depending on the whim of each owner.

As the town developed its rainbow colored streets the citizens were confronted with a different problem. In that its location in the thick jungle, limited light to begin with, and the close and colored buildings further restricted the available light and inhabitants were slowly becoming blind. When made aware of this the Federal Government offered to pay for all new white paint free of charge to restore the ‘antiquity’ of the town and provide a lot more light. At the time of writing more and more home owners are taking the Government up on that offer and the town is slowly losing all of its garish colored facades. At some point in the future it will be known again as “Blanco Comala”.

Suchitlan which means “Place of Flowers” is the centre of the coffee growing area. It is home to the famous masks, some made by the artist Jesus Rincon, worn by traditional dancers during, Danza de los Morenos. This holy-week ritual “commemorates the dancing animals, whom distracted the Roman guards and enabled the Marys to rescue the body of Christ.” (a quote from online Comala, Mexico). The indigenous people in this town also speak the ancient tongue of the Nahuatl.

This estate originated in 1531 following a gift to the Franciscan monks by Hernan Cortes. The estate was purchased by the Rangel family the last owner of which being Alejandro Rangel, the famed Colima artist. He willed the Hacienda to the University upon his death. The governors of the estate have restored the Franciscan church and house, turning one house into a museum and are now developing the gardens surrounding the house into a nursery specializing in the flora of Colima.

Two Minutes at the Stop Light