On a hillside in the Santiago area of Manzanillo, overlooking Santiago Bay, is a botanical garden named Ola Brisa Gardens a wonder to behold! Below the lovely home of Tommy Clarkson is the multi-terraced hillside “civilized jungle” developed by Tommy and his late wife, Patty. Hundreds of varieties of palms, trees, vines, succulents and flowers from México and around the world comprise an impressive collection of plants.

Abundant in this area of Mexico are palm trees but, in just one location, Ola Brisa Gardens has over 170 species of them! “Palm trees,” as they are often called, are not actually trees, just “palms,” as Tommy explains. They come from places as far away as Pakistan and Syria. Other plants have come from the Arabian Peninsula, Micronesia, Polynesia, the Amazon river basin, the Mekong Delta, China, Brazil, India and many points in between!

A “Tommy tour” of the gardens begins with a good humoured talk about development of the gardens and what visitors will see. Although plants have been carefully selected from around the globe, Tommy states emphatically, “It should go without saying that I would never import an invasive plant.”

Of interest to any gardener is that coconut fiber, also called coir, is superior to peat for retaining water, to use instead of peat moss. It is recommended by Tommy and abundantly avail-able in Mexico. Another tidbit of advice for any gardener is that dried cow manure is the best natural fertilizer.

For gardeners in tropical areas where palms grow, he states, “Never cut a green palm frond!” as it will markedly disturb the palm’s growth pattern or if too many are cut, potentially kill it. Visitors learn the differences between self-cleaning and not self cleaning palms, armed or unarmed palms, whether they have dried frond skirts or not, and whether they are clustering or solitary palms!

Also explained in Tommy’s tour are the various soil types and watering regimens required of different plants. Everything is well explained, from coconuts to caladium cultivars, and visitors will learn terms like palms, palmates and palmettos!

Tommy’s encyclopedic knowledge of everything in the gardens is impressive, but even more so when one realizes that he is not a botanist or a scientist, but a former US Army Lieutenant Colonel who spent 21 years total in the regular force and the reserves, and has served in Germany, Viet Nam, Thailand, Mar-shall Islands and Iraq, as well as on various US stateside assignments. He is entirely selftaught when it comes to plants. “I’ve never taken one minute of college botany or biology!” Tommy readily acknowledges.

Yet he is called upon for landscaping and gardening consulting and speaking to others who maintain botanical gardens. His interest in plants was spurred by his grandmother, Rose, when he was spending time on his grandparents’ farm while growing up in Kansas.

His grandfather, Leo, inspired an interest in politics. After his military service, Tommy’s pursuit in that area materialized when he served as the youngest mayor in Kansas history, for the city of Hutchinson, in the mid 1970s.

Besides his tours, Tommy shares his knowledge of the gardens’ collection in two volumes entitled The Civilized Jungle, subtitled Tropical Plants: Facts & Fun From Ola Brisa Gardens. Those books, created by Tommy and Patty, are each over 200 pages, illustrated with beautiful color photos of every plant described in the books. But they are more than that to me. I use them for reference about the wonderful growth we see here in this marvelous climate.

For Tommy Clarkson, Ola Brisa Gardens is a passion, not a business, and was established as a Mexican registered not for profit foundation. After moving to Mexico in 2006 and building the gardens, Tommy and Patty began giving tours in 2010. Funds derived from tours go towards staff salaries, garden maintenance and as Tommy says, “a water bill from hell!”

Your visit to Ola Brisa Gardens will be full of horticultural highlights. My latest tour had barely begun when a woman standing nearby, and likewise taking pictures, turned to me and said, “This is all so wonderful!” To learn more, visit the web site at https://olabrisagardens.com. 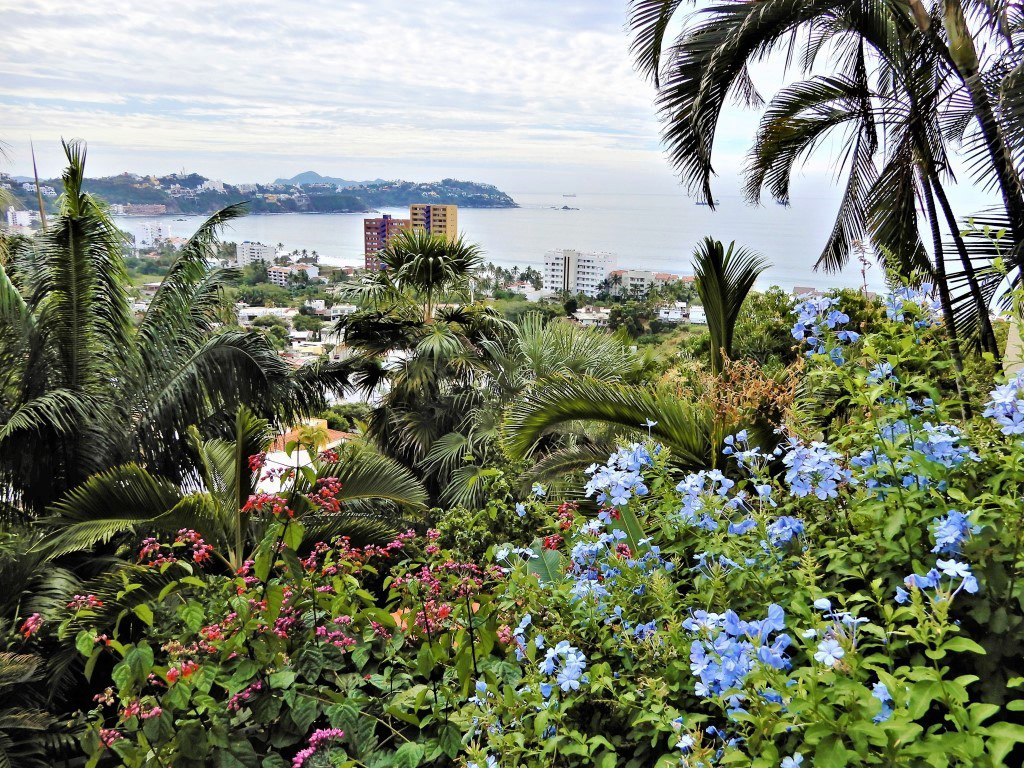