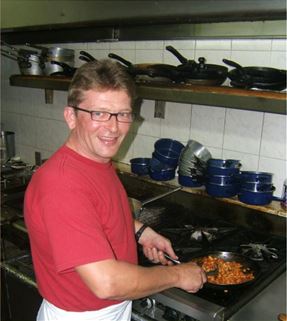 By Jim Evans  from the February 2010 Edition 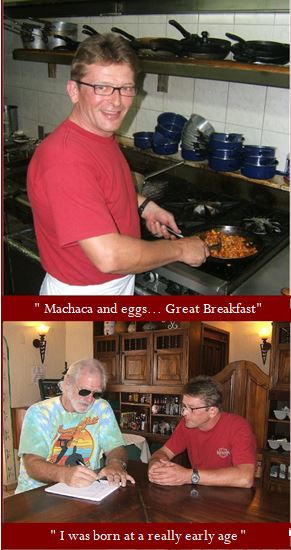 Many of us know our personality this month as the affable always smiling manager and Chef of one of our finest Restaurants, La Pergola. He can be found most mornings shopping in Commercial Mexicana.His engaging smile and pleasant manner is always evident as he takes time from his busy day to chat..

Born in Bavaria, the Beer and Culinary section of Southern Germany, Wolf attended the highly regarded Kerchensteiner school in Regonsboro whose graduates have gone on to become Chefs in some of the finest restaurants in the world. He began his career by acquiring his professional knowledge working in major 5 Star Hotels and restaurants throughout Europe and the Arabian peninsula. Some worthy of note are, the Hotel Schloss Buhlerhohe, Buhl, and The Hotel Four Seasons, Rengonburgo, both in Germany… it wasn’t long before he discovered his true passions… a love of travel and an enthusiasim for extreme sports… Over the next few years he worked in The Hotel Suvretta House in St. Moritz, Switzerland, followed by hotels in Agno, Italy, Sanaa, and the Republic of Yemen. He also worked in one of Stockholms finest Gourmet restaurants, the Stallmastregarden. All the while indulging in extreme sports from Downhill Skiing in the Swiss and Italian Alps to Windsurfing along the treacherous Arabian Coast. He has also worked in Sheraton Hotels in Cairo, Nairobi, Dubai, Bermuda, Italy and Bangkok. Wolf admits to speaking English, Spanish, and German fluently and has more than a passing knowledge of French, Italian and Swedish.

Wolf ‘s move to Mexico was precipitated by two major events, the 1998 bombing by Al Qaieda of the Sheraton Hotel in Yemen where he was working, and a job offer as Head Chef and restaurant manger in a brand new Restaurant/Hotel La Pergola here in Manzanillo. 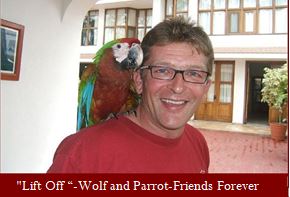 An avid diver and Motorcyclist his passions also extend to his six Parrots and five Monkeys… This writer was fortunate enough to be on hand when the veterinarian came to examine his prize possession, a baby Blue Parrot… The Vet reached into the container holding the scraggly featherless baby with an oversized head and bulging eyes to remove it for examination causing not only the youngsters, Mom and Dad to squawk vociferously, but also setting up a screeching cacophony amongst the four other parrots and two Toucans housed nearby.. The loudest of these complainants was “ Donto” ( dork) a green Military Parrot who seemed to have some pretty strong objections to the baby being handled …Wolf’s love for these birds could be measured by the increased twinkle in his blue eyes as he gently caressed the frightened baby parrot until it calmed…

Wolf admittedly started as a Chef to see the world, but seems to have found his niche in our Manzanillo, he loves the climate and of course the people. He rides his 2003 Anniversary “ V-Rod” almost every day, and scuba dives all along the coast of central Mexico when time permits. Is he done traveling for adventure, when asked he ran his hand through his raven colored hair and with his slight German accent and cadence, said, “ I think so “…. One can only wonder, but for now we have in our midst a true Gentleman and Purveyor of “ Haute Cuisine” in his inimitable “ Humberto Style” his own creation… 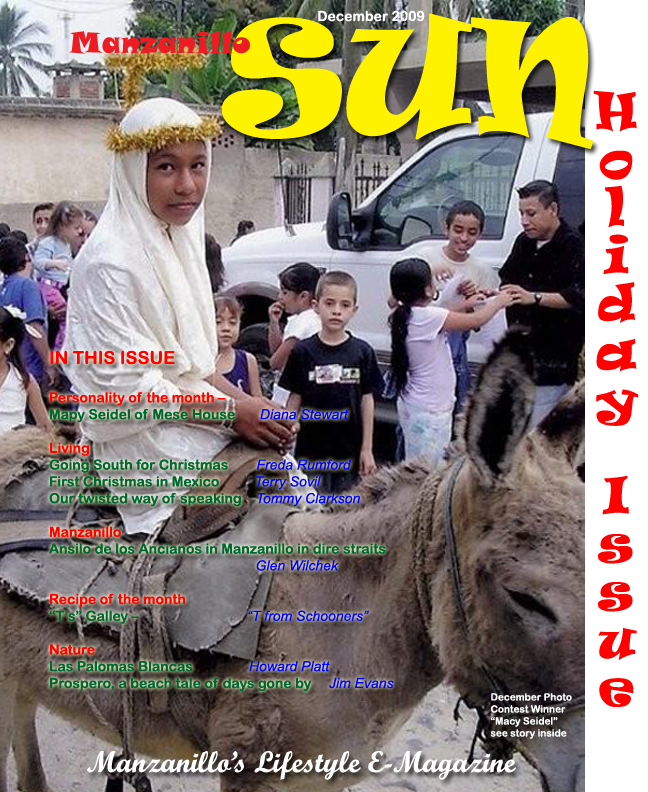