We used to have jungle on two sides but now it’s mostly jungle in the rear. I convinced myself that all this growth right up to and over the wall contributed to unwanted visitors such as scorpions, feral cats and raccoons. I worry about everything so it’s pretty easy for me to indentify a problem.

Unfortunately, brought up in Northern Minnesota, I was never introduced to the concept of hiring someone.

So I’m a DIY (Do It Yourself) type. In Minnesota if you get stuck in the snow and break an axle you simply get your chainsaw out of the trunk, cut down a tree, replace the axle and continue on. Sure we carried a chainsaw, a big shovel, kitty litter, candles, candy bars, jumper cables, a pan to melt snow for water, a tow chain and a pencil because the ink in a pen will freeze.

You just keep going, you don’t call anyone!

More than intimidated my courage faltered after finding two large snake skins in the yard. Maybe I could hire someone, you know, just to provide moral support? Ricardo manicures our palm trees and he wouldn’t go back there. Instead he stood like a ninja atop the wall and with two machetes whirling while I went in on the ground.

Dressed in a t-shirt, long pants, black dot gloves and heavy boots I waded in, chainsaw screaming and trees and branches falling everywhere. A sharp pain. The attacker flew off. Wasp! Not just any wasp, one of those wasps”. These man killers are easily 1.5-2 inches long. For metric people that’s pretty close to 1 meter. If you are not into metric, but fish, that’s close to two feet.
It stung me at the base of my right thumb.

Dizzy, the affect of a sting by a “drunken wasp”, feeling intoxicated the pain passed. All was fine until the third day when my right hand looked like it was a boxing glove. The doctor gave me a prescription and advised it wouldn’t have gone away on its own.

Six months pass and my courage returns and so does the brush. Three parts fool and one part brave I had to go “over the wall” again! Alone this time. I sharpened the chain on the saw. I sharpened the machetes and cut my finger wide open on one of the blades. Blood is everywhere, but like Jesse “the Body” Ventura “I ain’t got time to bleed”. A sane person may have given up but armed with two machetes, heavy boots, t-shirt, heavy sweatshirt with zipper and hood with drawstrings, heavy boots, leather gloves tucked under the sleeves and a new weapon I went in. 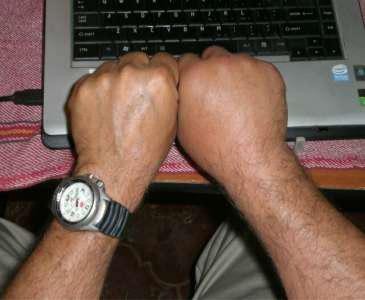 shooting a stream of spray 20 feet right into the nests. It’s hard to handle with the leather gloves on. The wasps fall. I set the can down and start working again. More wasps!

I see 15-20 of them coming in for a strafing run. I push the button and take them out in a clump. I shake the can and realize my ammo is almost gone. Then I spot two more nests!

Carefully I circle and get into a good position. SPRAY! With the remaining contents of the can I take out the nests. STING! I’m hit in my right bicep through the heavy sweatshirt and my t-shirt.

I don’t give up. I trip with my foot caught in a stump and twist my leg almost falling chest first onto a thin, sharp tree trunk. Now my knee is out.

A swing and a miss! Fortunately it’s the flat part of the blade that hits my leg. I retreat a short distance to let them contemplate their fate.

Left over pills from my first encounter let me self-medicate my two stings. My knee hurts and I’m limping. But I still had time to get to the bank since my debit card stopped working. Somehow I entered the PIN wrong and now it’s locked. Again!!

“A Place Where the Sea Remembers”