By Lorenzo Llamas from the February 2010 Edition

CARVED OUT OF THE PACIFIC COAST, almost exactly half way between Manzanillo and Puerto Vallarta, is the

Bahia de Chamela. Studded with eight or nine various sized rocky islets, it is an idyllic setting to get ‘away from it all’ for the day, a weekend or even a week. The village of Chamela is toward the southern end of the bay. A bit further along Highway 200 is a larger town named San Mateo, a kilometer or two from the ocean. But the gem of this

picturesque bay, I think, is at the northern end of the Bahia de Chamela, about three kilometers off the highway from the turnoff, and it is called Punta Pérula.

It appears to be little more than a sleepy Mexican village from what I can tell the couple times I have visited. There’s not really much of anything around more than blissful solitude, sand, sea and sunshine. During my last trip, however, I did notice quite a bit of construction going on. It was hard to tell if it was mainly residential or commercial, but maybe ‘something’ is headed Punta Pérula way. Now might be a good time to enjoy and explore this pleasant seaside hideaway.

Punta Pérula is a two and a quarter hour, give or take, drive north of Manzanillo along Highway 200; 45 miles/72 kilometers north of Melaque. The highway from Manzanillo to Melaque is quite a nice drive and well maintained, but several kilometers after passing the Melaque cutoff, as you veer to the left, the roadway slims down to a two-lane highway with many curves, and rises and falls in elevation. I like to travel this section of the highway with the benefit of daylight. 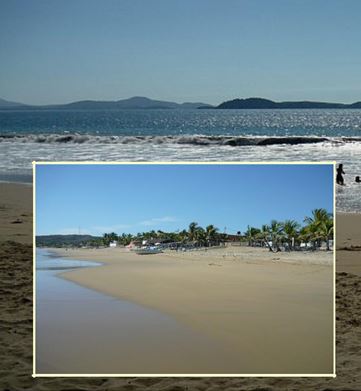 Something must go on in Pérula, but I am hard pressed to say exactly what that something is. Maybe 500 folk populate this beachside pueblo. Maybe there’s more. Maybe there’s less. It’s the northern terminus of the Costa Alegre. There are several small hotels and RV parks in Punta Pérula so I would assume it gets some sort of action. Sometime. Maybe during the Christmas and Easter breaks. Or things might pick up over summer vacation and weekends. I know both Canadians and Americans that used to winter in Vallarta have bought land or casitas there. This is how my sister and her husband, who vacation each year in Vallarta, had come to hear of Pérula. An amigo in Vallarta who had bought some property in Punta Pérula suggested they check it out, and inspired by the description of this quiet, little beach town, they were serious enough to consider buying a vacation/retirement casa in Punta Pérula. Last year we all met there to scope it out. We all realized that it really is in the middle of nowhere. There is no La Comercial. No Home Depot or Sam’s Club. No theaters. No banks. No hospital. It has the usual little corner stores here and there, a farmacia, a little plaza It is a lovely, lovely spot, but I could never imagine my sister and brother-in-law, used to north-of-the-border creature comforts, being happy and comfortable so far off the beaten track.

I returned to Pérula again this past month. This time just to hang with two of my sisters, their husbands, and several of my amigos (with the ‘wheels’ for transport) from Manzanillo. I have only been there during the week, and only for a day each time, so I don’t have good knowledge of what goes on in Punta Pérula. Truth be told, it seems undiscovered, near deserted, and what doesn’t go on might be easier to identify and list. Gentle waves break on the shore. It’s beautiful, no doubt about it. Tranquil, quiet, calm. There are miles and miles of clean tan sandy beach that run along the edge of the Pacific for just about as far as the eye can see. One website I checked when I was first checking out exactly what and where this Punta Pérula was, said there were ten miles of beach, another said five…I’d be inclined to agree more with the latter.

There is a handful of beachside restaurants. My sister’s PV friends had told her about Mariscos Chee-Chee so that’s where we have met up both times we have had our ‘Costa Alegre Reunion’. It’s a very pleasant, clean restaurant; your basic ramada

with decent, fresh food, good service (it would take a lot to have bad service when you are just about the only clients in a place), and reasonable prices. You’re right on the beach under a palapa with people bringing you food and drink. I mean…

Our November jaunt up the coast ended up being a ‘reunion’ of nine people. The five Manzanillo delegates arriving before those from Vallarta. We set up shop at Chee-Chees around 10.30am. We ate, we snacked, we drank a variety of beverages from coffee to sodas and cervezas. We played in the surf, walked along the beach, took lots of photos. We even did a little fishing, my brother-in-law had brought along three rods and reels. If more than 20 people passed by Mariscos Chee-Chee while we were there I’d be surprised. Around 5.30pm, after settling our bill, we started

back for Manzanillo. Our total check for the day was a shade under 1000 pesos. Not bad at all for a very pleasant and enjoyable day at the beach. Far, far, far away from any sort of maddening crowd.

Punta Pérula really is almost like being in heaven on earth; who ever said that paradise was lost?