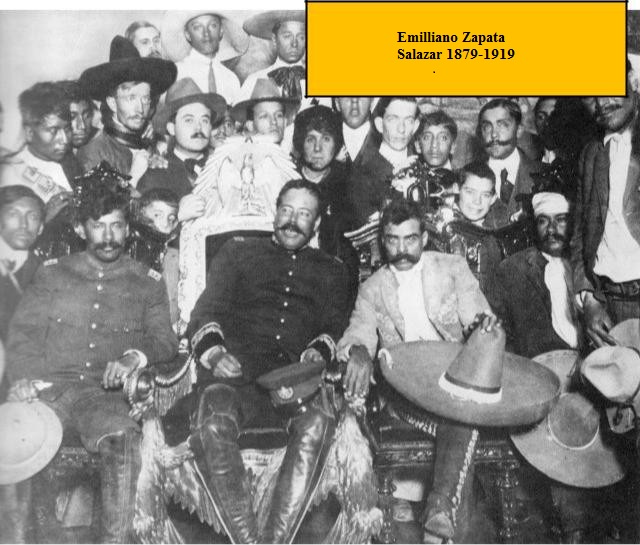 By Terry Sovil  from the September 2010 Edition

• Best Known As: Peasant hero of the Mexican Revolution

• Famous Quote: “Better to die on one’s feet than to live on one’s knees.”

• Summary: A famer and horse trader who rallied indigenous locals to return land from rich landowners in south Mexico. Many towns, cities and streets are named after him.

Emiliano Zapata was born into a large peasant family. They were landless tenant farmers, not poor, living in Anenecuilco, Morelos. His parents, Gabriel Zapata and Cleofas Salazar of Zacatepillo were Mestizos of mixed Nahuatl and Spanish ancestry and dealt in livestock. The ninth of ten children, he was orphaned at age 17 and took responsibility for his family. While he had little formal schooling, he could read and write having worked with his teacher, Emilio Vara, for a limited education. Anenecuilco was a Nahuatl speaking area and eyewitness accounts state that Zapata spoke fluent Nahuatl.

Zapata knew the severe difficulties of his countryside. He was of native descent, a tenant farmer and in a position socially between a peon and a ranchero. He was a born leader and felt injustices put upon his people.

The social norm was a type of capitalist feudal system with large ranches (haciendas) controlling more and more land and squeezing out the independent communities. Residents were then forced into a type of debt slavery on the haciendas. Porfirio Diaz ran local elections to argue “self-rule” but his allies were given positions that became enforcers of land reforms that put more and more land in the hands of wealthy landowners. In 1910 as Francisco I. Madero, Mexican revolutionary and President from 1911-1913, rose against the dictatorship of Porfirio Diaz, Zapata joined Madero with a cry of “land and liberty” (Tierra Y Libertad). Zapata was recognized as being a skilled leader and his fame grew. When Diaz was forced out and Madero assumed control their relationship soured. Zapata’s desire was for land reform for peasants where Madero, a landowner, was more interested in creating a democratic political system. Zapata felt land reform had been abandoned and returned to the mountains of his home state and worked on his own plan. In November, 1911, he issued the Plan of Ayala calling for return of land to the indigenous people.

He was successful at repelling Madero, Victoriana Huerta and Venustiano Carranza with a large force of up to 25,000. The peasants rallied to his support.

Zapata controlled the forces in the south and he earned a nickname in the press of “Attila of the South”. When Madero was overthrown, he joined with forces in the north commanded by Huerta and Pancho Villa. His control expanded and even included the Federal District at times. He was successful at repelling Madero, Victoriana Huerta and Venustiano Carranza. When Carranza seized power Zapata and Pancho Villa fought against him. Zapata’s forces occupied Mexico City three times between 1914 and 1915, once with the followers of Pancho Villa. Zapata finally returned to his home land in Morelos. He continued to resist and was regarded as a hero of the revolution by the indigenous people. His movement, zapatismo, was an agricultural movement.

Government forces were never able to defeat Zapata but a secret plan finally silenced him. A general and his lieutenant who supported Mexican President Venustiano Carranza sent word to Zapata that they intended to defect. To make it look sincere they staged an ambush on a Federal column and killed 57 soldiers. Zapata agreed to a meeting and on April 10, 1919 Col. Jesús Guajardo’s men shot him repeatedly. It is said they took his body to Cuautla to claim the bounty and were paid only half of what was promised.

Following his death the Army of the South slowly fell apart. Although not well educated and leading illiterate men, Zapata was one of the most significant figures in Mexico during the period 1910 to 1919. His influence is still felt today. A popular movie, Viva Zapata!, was released in 1952 starring Marlon Brando as Zapata. John Steinbeck won an Oscar for the screenplay and Anthony Quinn won an Oscar portraying Zapata’s brother.