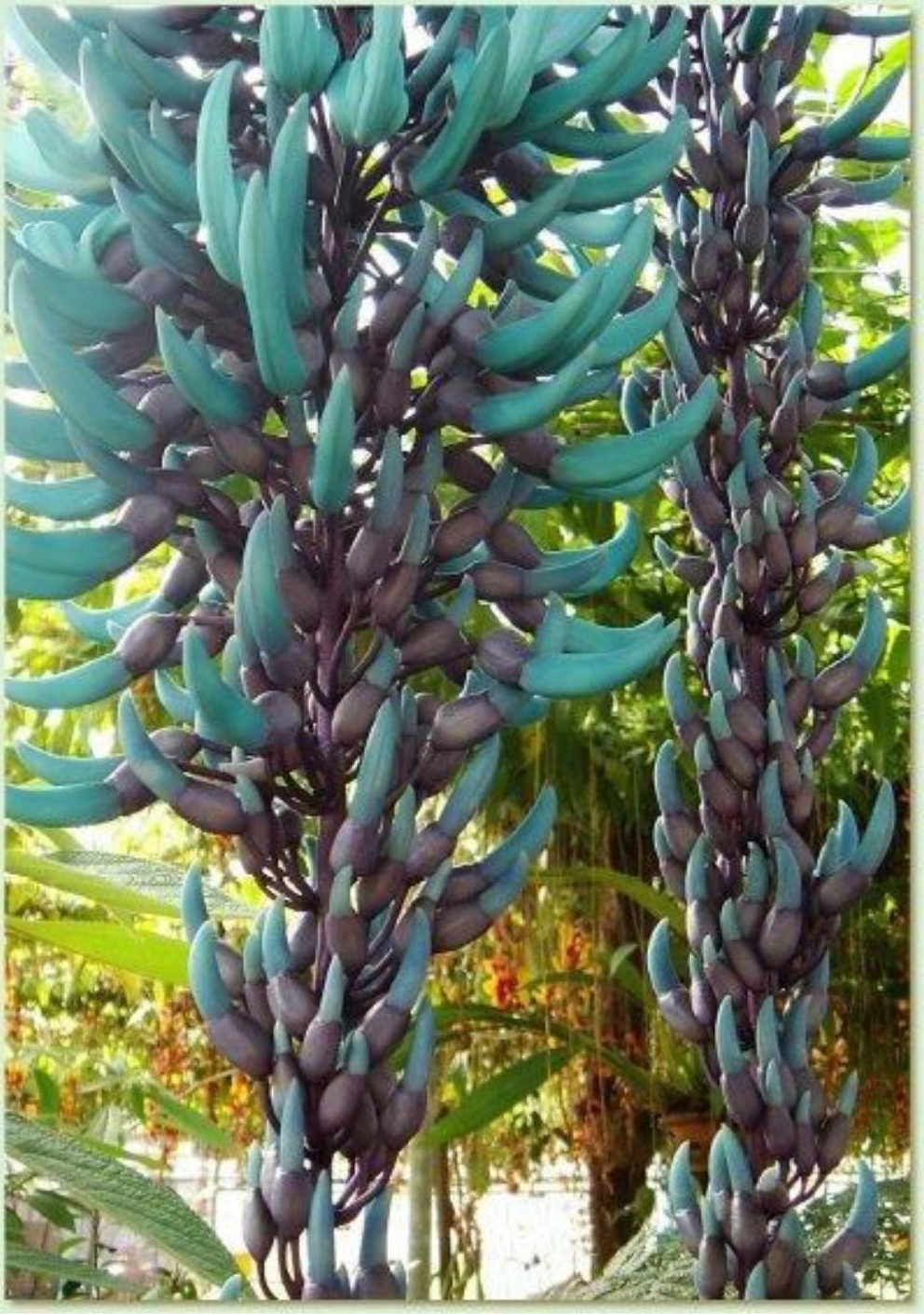 By Tommy Clarkson from the May 2018 Edition

There is only one plant my Patty has ever asked that we include in our gardens. This is it, the Jade Vine, endangered in the wild and somewhat scarce in cultivation. After an extensive time of searching, several years ago, I finally found a source, south of Puerto Vallarta and acquired a couple…. only to have the blasted iguanas promptly eat them down to scant stem stubs! The scaly, reptilian swine! When I returned to my source, none were any longer available. It took me another six years before I finally found three more specimens – larger this time  in Mexico City. (At this point, I put our lizard interlopers on the direst of consequences notice!)

The Strongylodon genus consists of perhaps some twenty species of woody shrubs and vines (mostly the latter). Their home habitat ranges from Madagascar through the Philippines into Polynesia. The rather rare Jade Vine comes from the damp riverine rainforests of the Philippines. In these natural environs, its aggressive growth allows it to virtually swallow trees and sup-porting structures! But wherever located, this to our way of thinking, is perhaps the most beautiful of flora, what with its stunning jade green to almost turquoise (like the color of oxidized copper) pendant flower clusters.

Now, one knows how botanical writers sometimes quibble a bit on details. William Warren, in Tropical Plants, says these flowers “are purplish or pale green when they first appear and later harden into [a] darker green.” Whereas, Robert Lee Riffle in The Tropical Look – says they commence their lives a “bronzy rose.” I’ve read elsewhere, “waxy, brilliant aquamarine.” (How about if I just say a politically compromising “yes”?)

Regardless of their subtle initial color, they are attractive! These are one to five feet (.30 – 1.52 meters) long, pendant racemes with claw-shaped flowers of four to five inches long. In Hawaii, the individual flowers are incorporated into leis.

According to Kirsten Albrecht Llamas in her great book Tropical Flowering Plants, “The flowers have a hood-like standard [an enlarged or distinct erect petal] and a falcate [curved like a falcon’s beak] keel clasped between two wings…. The species name means “grapelike,” alluding to the way the blue-green flower clusters dangle under an arbor like under-ripe green grapes with a frosty bloom.”

To my eye, gray-green when young, its trifoliolate leaves (compound with three leaflets) – elliptical to ovate in form grow to five to six inches (12.70 – 15.24 cm) long.

A woody evergreen with serpentine stems, it is an aggressive grower and rampant climber to over fifty feet (15.24 meters) in length. It, definitely, requires support (such as a pergola) so that those magnificent flowers can be appreciated from below.If controlling their size is an issue, cut them back after they’ve bloomed dramatically so, if necessary.

As to a home, the Jade Vine likes full sun, with rich, moist soil and its roots should be shaded. It’s a bit of a hog when it comes to moisture, growing best with ample and copious water. When the top of the soil at its base is dry, give it more. Lack of water results in browning of its leaves, and causes slown and stunted growth. So, water all year around. They are, however, not heavy feeders. I’d suggest a mixture of half a teaspoon of water-soluble, balanced fertilizer – or one specifically for blooming plants per gallon of water, twice a month during its primary growing season down here that’s nearly all four “seasons”.

How about propagation? This can be accomplished through either seed plantings or vine/stem tip cuttings best taken early in the season. To “add an edge”, use a rooting hormone, then place the cutting in starting soil and put it in a warm location with ample humidity and moisture. Within a few weeks, new growth should commence. The Jade Vine can also readily be sprouted from seeds harvested from seedpods. Try to avoid transplanting. Once established, replace the top few inches of surface soil annually.

In its native environs, the Jade Vine has a most unusual way of spreading its pollen. When a bat alights on the flower to stick its tongue into the flower to extract nectar, a protruding “wing-tip” above it exudes the pollen on the bat’s head which then is passed on as it visits other Jade Vine flora. Interesting, huh? 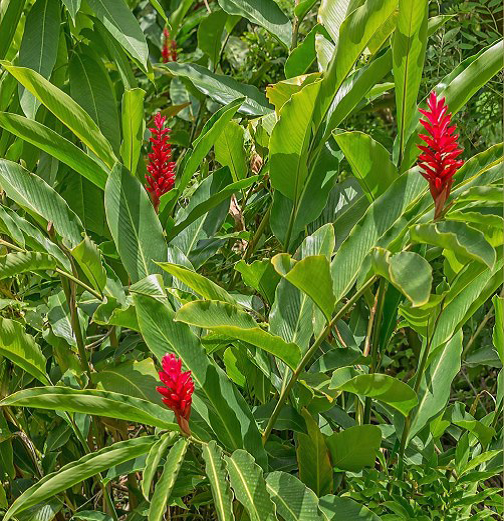