By Freda Rumford from the December 2009 Edition

WE CROSSED THE MEXICAN border at Nogales after a night in Tucson and the morning hunting down the Sanborn Insurance Agency who didn’t open until after 9. Having just bought an insurance policy for 6 months with cash and knowing that we needed more to pay for the car import, that extra little amount was considered briefly, then as we didn’t really know what was expected we decided to go for it. As promised, we crossed quickly and easily, got the import sticker put on the car and set of for all points south having many adventures along the way which will be told in due course.

What we didn’t know and were not told in any of our research over the past few months, was that the interior of Mexico spills out into the coastal towns for two weeks over Christmas leaving very little accommodation for north of the border tourists unless booked months ahead.

Arriving in Guaymas, Sonora, in the first week of November, we decided to stay put for a while before we continued south. There had been many places we had read about that sounded good and gradually we worked our way down the coast visiting them all along the way. Guaymas and San Carlos were lovely, we enjoyed our time there and met some very nice people but the ocean was cooler than we liked.

It was now 29th November and the next stop Mazatlan. That town seemed awfully grubby and took forever to find the hotel that was recommended by Sanborns. It was right next to the “Shrimp Bucket” restaurant, which did sound very appealing. As it turned out, the restaurant was in the hotel and the meal they produced so-so but the hotel very comfortable. Not seeing anything else in our brief stop that seemed particularly appealing, we pushed on. San Blas had been recommended but we decided to continue our journey and check out Rincon de Guayabitas instead. That was a pretty little town, it would be very nice to stay for a few months. But “Sorry we can take you until 21st December then you have to move,” was the continual response to our request for accommodations.

Bucerias, Puerto Vallarta, Melaque, Barra de Navidad all told the same story. Finally we arrived in Manzanillo mid afternoon feeling worn and travel weary plus a little anxious. We couldn’t get into any of the small hotels while driving into Manzanillo as road repairs were in evidence along the roadside. Men were everywhere on their hands and knees putting cobblestones into the side roads and entrances by hand along the entire road which later we discovered was Boulevard de Miguel de la Madrid. Now we were in Las Brisas. It seemed awfully dusty but two of the recommended hotels came into view, side by side and we stopped to ask the question that we knew almost by rote now.

THE FIRST ONE “Bungalows Angelica” was well outside our price range, so we called next door to Suites New York. HEY PRESTO, they had one room available until the New Year at 1200 pesos for the month. The exchange rate at that time made the cost out to be about $250 CAD. Heck of a deal! (We soon discovered that this was the room’s true worth.) The room was a bit on the dingy side but it was OK for a few weeks and would give us time to check our surroundings. That night, we sat on the bed and wondered what we had done!! One electric bulb hung from a wire in the bedroom and there were only two hard chairs in the kitchen to sit on.

Next day, the sun shone brightly, the world looked cheerful and when we wandered onto the beach the ocean sparkled invitingly. After changing into our bathing suits we timidly tested the water temperature and discovered it to be delightfully warm. We were in almost without a second thought and enjoyed a relaxing swim for the first time since leaving Guaymas.

I parked myself on the beach in a deck chair most days whilst my husband went off exploring and meeting people along the beach. He made friends everywhere and eventually I too was persuaded to leave my chair for a while.

One evening we had a visit from some of our new friends who invited us to join them for dinner on Christmas Eve. They were Italian and having worked for a long time with an Italian gentleman I knew that dinner with them was going to be special so with no hesitation we accepted, offering to bring dessert.

Next morning, the assistant manageress of the New York suites dropped by while my husband was on his walk and invited us to Christmas dinner on Christmas Day. Wonderful, we had the holiday covered and our first Christmas ever away from our family would be in our new country with new friends. It boded well.

The party on Christmas Eve was as wonderful as expected with both the company and food incredibly good. The family had been cooking for days and a true Italian Christmas dinner was enjoyed by eleven of us. Small gifts were exchanged and there was even a surprise gift for us. What lovely warm hospitable people! 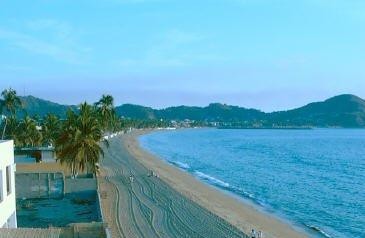 Next day supper time rolled around. It had been a glorious holiday with swimming in a warm ocean, starting our tans under an incredibly blue sky and meeting Mexican families at play on the beach. Eventually it was time to get gussied up for our next party.

Armed with gifts we knocked on the door of our hostess. No sign of anyone, peeking in through the window there was no sign of the table being set for dinner and even worse, no smell of the promised turkey cooking. Eventually after opening the door and calling, Ana, our Mexican lady friend appeared but looked far from welcoming. Her first words “Where were you and why didn’t you come?” I was really taken aback and eventually realised that the invitation was for Christmas Eve! “But you said the dinner was for Christmas Day.” I said apologetically. “Everyone knows that Christmas Day is on the 24th “ she almost spat at me. “No, no,” I said, feeling absolutely dreadful, “ that is Christmas Eve. Christmas Day is the 25th.”

Unfortunately though the damage was done and no matter how many times we went around it and we did, we were too late for dinner. She did offer to make us a cold plate but we were far too embarrassed to accept. So, with even more apologies, we left her with the small gifts we had bought and went back to our dismal room. What now? Ham and Cheese sandwiches were a far cry from the delicious turkey dinner we had been anticipating but the dinner the night before was still a great memory.

So much for Christmas in Mexico! We had learned much in the past few weeks and would learn more about Mexican Christmas customs in the years to come. Firstly, don’t expect to get rooms anywhere and secondly ask about dates not days when accepting invitations.