By  Robert Hill from the June 2011 Edition

Many foreigners living in Mexico are unaware that a very strong and effective consumer protection agency exits here, called PROFECO (Procuraduria Federal Del Consumidor). It is a federal office which has offices in most principal cities throughout the Republic. The Subdelegado in Manzanillo is Victor Manuel Granados, who heads an office staffed by 5 people, but the lady who gets things done is his manager, Lourdes Patricia Torres, or “Lulú”. Having worked for PROFECO for many years Lulú is not easily fooled by most of the lame excuses she hears from goods and service providers, who may be taking advantage of their clients. She has honed her negotiating skills in order to solve most problems between providers and consumers in an amicable manner, but her decisions, along with the State Delegado, carry the full force of the law, and all Mexican business people understand that PROFECO has the power to impose stiff fines and penalties on those who may try to rip off the public. For this reason, sometimes all that is needed in order to put the fear of Moctzuma into the hearts and minds of shoddy service providers, is to mention the word

I should mention here that PROFECO provides a range of services to the Mexican business community and consumer groups, but their main service to the foreign community is, I believe, that of providing a legal recourse for those of us who may experience problems with Mexican goods and service providers. I should also state up front that the great majority of Mexican business people are honest, and will try their best to treat the foreign community fairly. However, I think that we all have had experiences where goods and services have not been received as promised, and that at times we may need the services of an agency like PROFECO to intervene on our behalf.

I will try in this article to relate my personal experience with receiving help from PROFECO, and then to recommend some things we can all do to protect ourselves from unscrupulous businesses. I was having electrical problems with my minivan, and was told by my general mechanic that I needed to take it to an automotive electronics specialist shop. He told me of one in Santiago, a short distance north of Schooner´s restaurant, called Ventura, whose owner is Luis Alfredo Garcia. Luis hooked up a scanner to my minivan and told me the main computer was bad, and that he could either repair or replace the computer with a good used one. I agreed to his price of $3,000 pesos plus $1,000 pesos for a new battery, which was to take 3 or 4 days to complete. After paying him half ($2,000 pesos) and 4 weeks of many calls and visits to Luis´shop, I became very tired of his song and dance and told Luis I would be contacting PROFECO if my van was not finished in 5 working days.

Well, he called in 3 days to say my van was ready, but there would be an additional charge of $1,500 for a total of $5,500 pesos. I was able to drive the van for 4 days, at which time the same problems returned as before. At this time I called PROFECO and inquired as to what I would need to file a complaint, and to make an appointment, which they said would be in a week. (telephone 332-9180)

The PROFECO offices are in Manzanillo Centro, on the second floor of the office building at the far end of the main plaza, on the little road which enters the Naval Base. It is air conditioned, pleasant and the people were helpful and professional. I gave Lulú a copy of my passport, my phone bill (as proof of address), the business card of Luis, the signed and itemized receipt he had given me, and a one page statement of the problem with Luis.

After some questions and answers she telephoned Luis and told him I was there to file a complaint. After they talked for a while she told me I had a choice of either accepting his verbal assurances that he would correct the problem, or that I could file a formal complaint. I told her I would prefer the latter, as I was up to my eyeballs with verbal assurances from Luis. She agreed, and in about 45 minutes I left with a formal complaint. This document was served on Luis, requiring him and me to appear in her office on a specific time and day, in about 2 weeks. At this meeting Lulú listened patiently to all of his BS reasons why my minivan had not been repaired, as agreed, but in the end gave him 2 weeks to complete the work correctly, and that I would be given a 90 day guarantee. All of this was written up in a 4 page legal document, which we were both given copies of, along with instructions to return in 2 weeks to verify the work had been satisfactorily completed.

We returned in 2 weeks and Luis had parked my minivan in the street below the PROFECO offices, as proof that he had indeed fixed it. There have been some recurring problems since then, so I call Lulú and she calls Luis, who promptly fixes the problem. Amazing!

Please pardon this somewhat lengthy story, but I know of no other way to demonstrate the thoroughness with which PROFECO does business, and how pleased I have been with their advocacy on my behalf. This is a free service of the Mexican government, in my case on behalf of a foreign resident! I have to wonder what kind of help a legal Mexican resident would get in the U.S., under the same set of circumstances.

O.K., what can we all do to avoid misunderstandings with Mexican business people, and to have the necessary papers and information, should we need help from PROFECO?

As an example, let’s say you want to have new kitchen cabinets made and installed in your home. Someone tells you about a good carpenter, so you call him. He comes to your home and you show him the work, along with a sketch or drawing of what you want to have done. You talk about the kind and color of wood you want, the drawers, cabinet doors, etc., etc. He comes back in a week with his drawings, measurements, wood samples, etc…. and a price, half of which he wants as a deposit. He assures you that the cabinets will be made and installed in 4 weeks… maybe 3. He gives you his business card as an assurance of his integrity, with several phone numbers written on the back, so you pay him half the money.

The next day he comes to your house, very apologetic, saying that his mother died in Jalisco, his brother got kicked by a horse and that his cousin fell off a roof.

You tell him that the cabinets must be done in one week or you will go to PROFECO. Maybe that will work, but if not, here is what you will need for PROFECO to help you:

1. You will need his physical address (his shop or house) and a phone number (recognizing that many Mexicans change phone numbers like they change underwear). PROFECO can and will go to his house or shop if no phone number works.

2. Get him to write down as much information as possible about the work he will do for you, including sketches, measurements, wood types, finishes, hardware, etc.

3. Have him write down the total price, deposit received, date of completion; then sign and date it.

4. Take photos of the existing kitchen cabinets or area you want him to work at.

5. You will need a copy of your passport, phone or electric bill, and a brief statement of the problem (in Spanish).

PROFECO does not require legal documents like we are used to up north. It is an informal process where a scrap of paper will do if it has pertinent information, and which someone like Lulú believes is valid.

Try to SMILE ! Up north you would have to pay a lawyer big bucks for this kind. 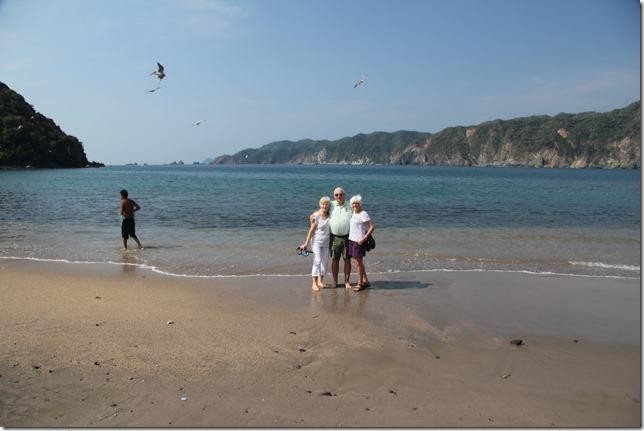