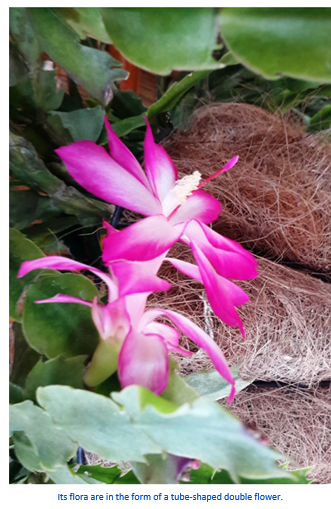 By Tommy Clarkson on the December 2020 Edition 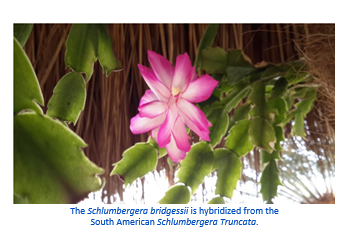 (Once again, I am reminded that the mind is a terrible thing to lose – but, then again, that’s taking the premise that I ever really started out with much of one in the beginning! Yesterday, February 22nd, José my senior gardener – was most pleased to point out to me this blooming beauty – a Christmas Cactus, which hung on one of our lower terraces under a Mexican Palmetto. [Apparently, botanically, as regards this specimen, the Christmas holiday comes a bit later in Ola Brisa Gardens! But, then again, consider those “Also known as” names and, beyond that, is the fact that, in Brazil, the genus-whole is referred to as Flor de Maio (May Flower)!] At first blush, my faltering “rememberer” couldn’t recall if, when or where I had written about it. Then, something clicked, and I recalled that it was in Volume II of “The Civilized Jungle” wherein I described the Christmas Cactus (Zygocactys truncate) – also identified as Epiphyllum truncate or Schlumbergera Truncata.)

Now, with memory triggered, I pondered whether or not to write about this attractive cultivar character and decided, why not? In no few areas, arenas and aspects, sharing a common name is, actually, a rather cool thing! Take, for example, father and son leaders of the United States of America, U.S. presidents, John Adams (the second U.S. president) and John Quincy Adams (the sixth) who shared common names, as did George H. Bush (the 41st ) and George W. Bush (the 42nd .) Beyond them, in France, that there were two Napoleons – the first ruled from 1804 to 1814 and again in 1815 and the second, Napoleon III (the nephew of the 1st) from 1852 to 1870. However, all were unique and wholly individual entities.

So why not give these two plant species their own individual attention? At the base of it all, what is in a simple designation, term or appellation? To rather germanely (I believe I’m coining a word there) quote Robert Frost as regards what is in a name,“The rose is a rose, and was always a rose. However, the theory now goes that the apple’s a rose, and the pear is, and so’s the plum, I suppose. The dear only knows what will next prove a rose.” (Hey, who needs higher academia? You can get a bit of class, couth, culture and – of course – colloquial cactus conversation, all right here!)

This particular beauty  the Schlumbergera bridgessii  stems (no plant pun necessarily intended) and is hybridized from the earlier mentioned species which is native to South America where it grows in the mountains of Brazil. And, as to specifics, this cactus produces small, flat stem segments which are some-what roundish with minor serrations on both sides. 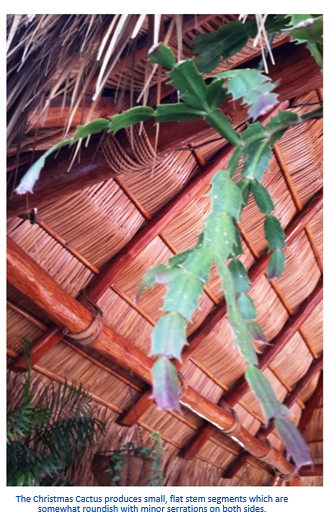 The flowers the Cactus’s defining feature – appear from the ends of these segments. These are in the form of a tube-shaped “double flower,” with the outer portion being formed by shorter leaves that curl back near the flower’s base, with the inner part being further up, near the stamen.

Though called a “cactus,” this plant thrives in cool temperatures and needs to be kept away from heat sources. As regards its watering needs: In a dry climate, outdoors, do so every two to three days when warm and sunny; in more humid environs, where cool or indoors, water weekly; and during the colder months, give it water less frequently. As to whether or not as some folks assert it likes coffee grounds, it depends on its soil. If your dirt is sparsely basic, to get it to a good pH balance, one can use diluted black coffee grounds (but ensure there’s no cream or sugar therein as it will bring on the bugs).

If, however, the soil is already acidic, don’t add coffee. If you’ve the means to check it, the Christmas Cactus prefers a pH be-tween 5.5 to 6.2.

At the sake of downright promotion of commercial agricultural products, I suggest that, after it blooms, your Schlumbergera bridgessii will like some Miracle Gro® Succulent Plant Food.

Christmas Cacti are also greatly appreciative of extra magnesium. As a result, mix one teaspoon of Epsom Salts (magnesium sulfate) per gallon of water with every other watering but not at the same time as fertilizing.

As an aside, Christmas Cactus ‘Aspen,’ a Schlumbergera hybrid, is a rather rare as a result of its frilly-edged white flowers. 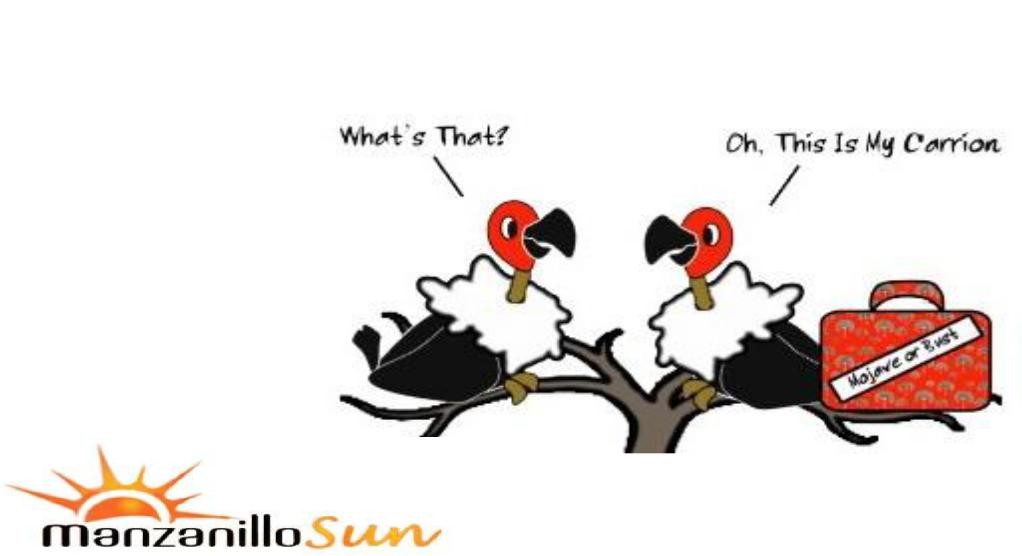 Our Twisted Way of Speaking – XIV