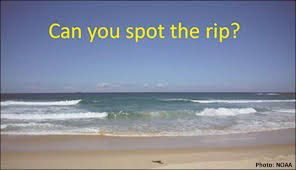 By Terry Sovil on the January 2020 Edition

While in Manzanillo, what is better than to sit on the beach, or on your deck, and watch the ocean. So big. So beautiful. So mysterious. So great for a swim. Don’t let a rip current turn a fun beach trip or swim into a problem.
What is a Rip Current?

Rip currents are strong offshore flows that happen when breaking waves are pushing water up the beach face. The piled-up water must escape out to the sea as water seeks its own level. The return flow, or backwash, is generally relatively uniform along the beach so rip currents are not present. If the water has an area where it can flow back out to the ocean more easily, like a break in a sandbar, then a rip current may form. Rip currents are generally small in width but there can be several present at the same time, spaced along the shore.

A rip current is a narrow channel of water flowing AWAY from the shore. They can be up to 30 meters or about 99 feet wide. A rip current can move as fast as 8 feet/2.5 meters per second. That’s fast!

These currents are strong. They can overcome the strongest of swimmers. As waves come in and hit the shore, water builds up and has to go somewhere. The water often won’t return the way it came in. It will take the path of least resistance.

You can detect a rip current in about knee-to-waist high water. It may be difficult to escape by walking back to shore against the current once you are in chest-deep water. 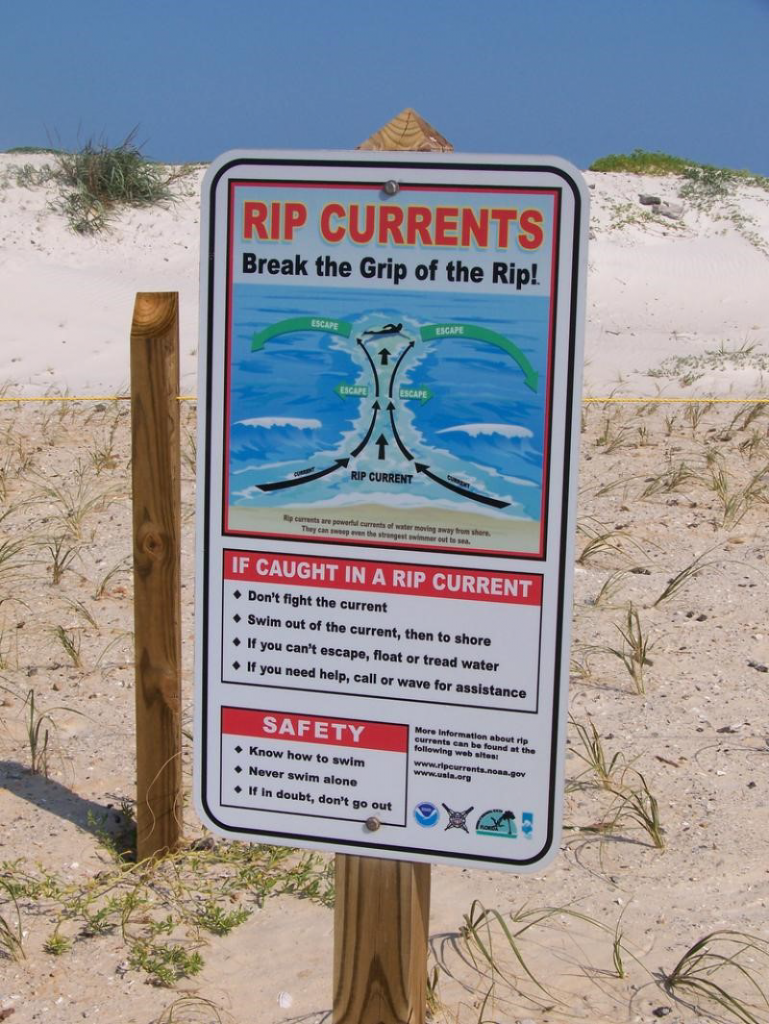 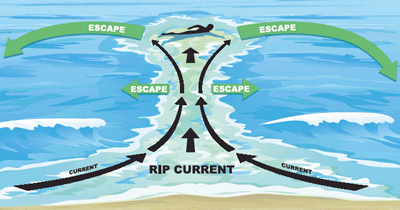 One way to help stay safe is to recognize the colors of flags on the beach. In Manzanillo, RED indicates a rip current or other hazard. YELLOW means conditions are rough. GREEN is all clear, as is no flag at all. If you are ever caught in a rip current, do not turn back into it to try to swim to shore. Swim PARALLEL to shore until you are out of the current.

What Is A Rip Tide?
A rip tide is a powerful current caused by the tide pulling water through an inlet along a barrier beach. When there is a falling or ebbing tide, the water is flowing strongly through an inlet toward the ocean, especially one stabilized by jetties.

During slack tide, the water is not moving for a short time until the flooding or rising tide starts pushing the sea water land-ward through the inlet. Fishermen are aware of these tidal flows and make their plans accordingly. Rip tides also occur in constricted areas in bays and lagoons where there are no waves. These powerful reversing currents are also named tidal jets by coastal engineers and they carry large quantities of sand that form banks in the ocean opposite the inlet channel.

There are 4 “types” of rip tides. A flash rip forms suddenly and can disappear as fast, normally during a storm when wave conditions increase quickly. A fixed rip forms between sand bars and deeper water channels. They may last for days, weeks or even months. This is the most common rip tide. Mega rips are the largest and form during a hurricane or very heavy rain-storm. A permanent rip happens when there are physical obstacles that keep it there permanently, a pier, jetty, rock formation or coral reef for example.

A rip current is NOT like a rip tide. A rip current is not a tide at all, but a rip tide is water moving through inlets on a beach, harbor and estuaries. Rip currents form anywhere where breaking waves occur. This can include large lakes and those like the Great Lakes in the central east part of the USA bordering Canada. The bottom makes no difference, whether rocks or sand. When waves break strongly and then weakly at a different location, this causes the water to move in a circle and creates a narrow current that moves away from the shore. This is a rip current.

You should be able to identify a rip current. There are 3 signs: a choppy channel churning or foaming of water with a circular motion, a line of debris or even seaweed and sand moving out to sea and a disorganized pattern of incoming waves or a muddy color. They look like a “break” in the incoming tide. See the photo. If there is no lifeguard, look for other swimmers and, if none are there, be cautious of entering the water. Never go swimming alone on an empty beach! 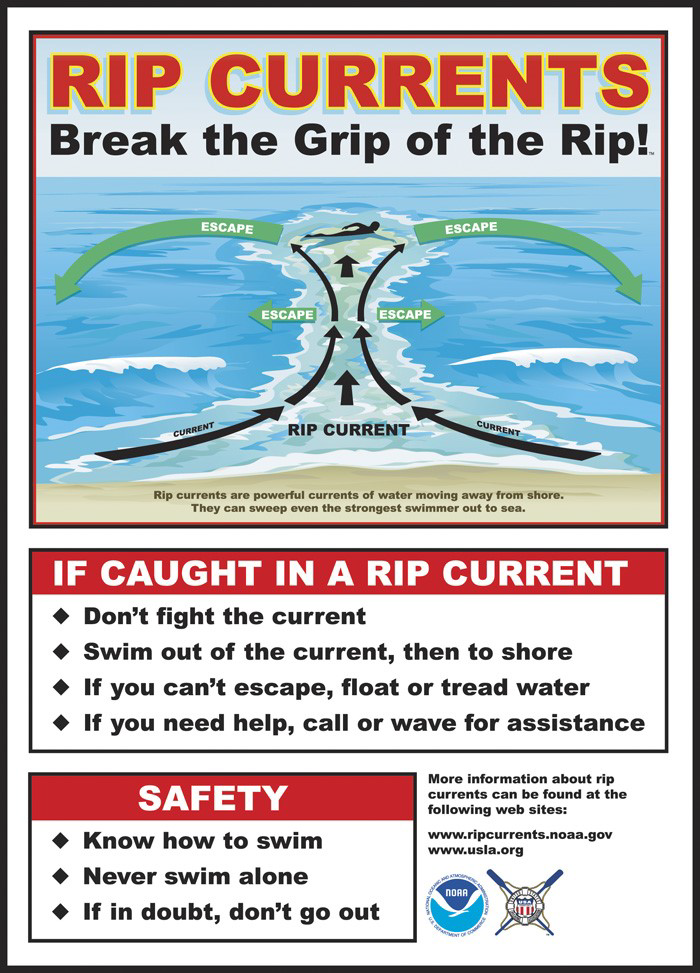 If you should get caught in a rip current, don’t panic. I know, “easy to say”, but realize that the current will carry you out and then the current will fade. It will pull you farther from shore but not underwater. Don’t struggle but swim parallel to shore. Yes, you will continue moving away from the shore but you will make headway in your swim.

Struggling and swimming against the current (back toward shore) is how most people die. If you can’t swim out of the current, continue to tread water and float on your back. If you break free, swim back to shore on a diagonal path so you don’t get caught again. Raise both hands and call for help if you need it. The Royal National Lifeboat Institution recommends the three R’s: Relax, Raise the alarm, wait for Rescue.

Watch this 1:40 video and you will see some of the ways rip currents appear:
https://www.youtube.com/watch?v=6qZRIN30Ugo

The Coconut Palm (part 1)- I Planted Roots in Mexico 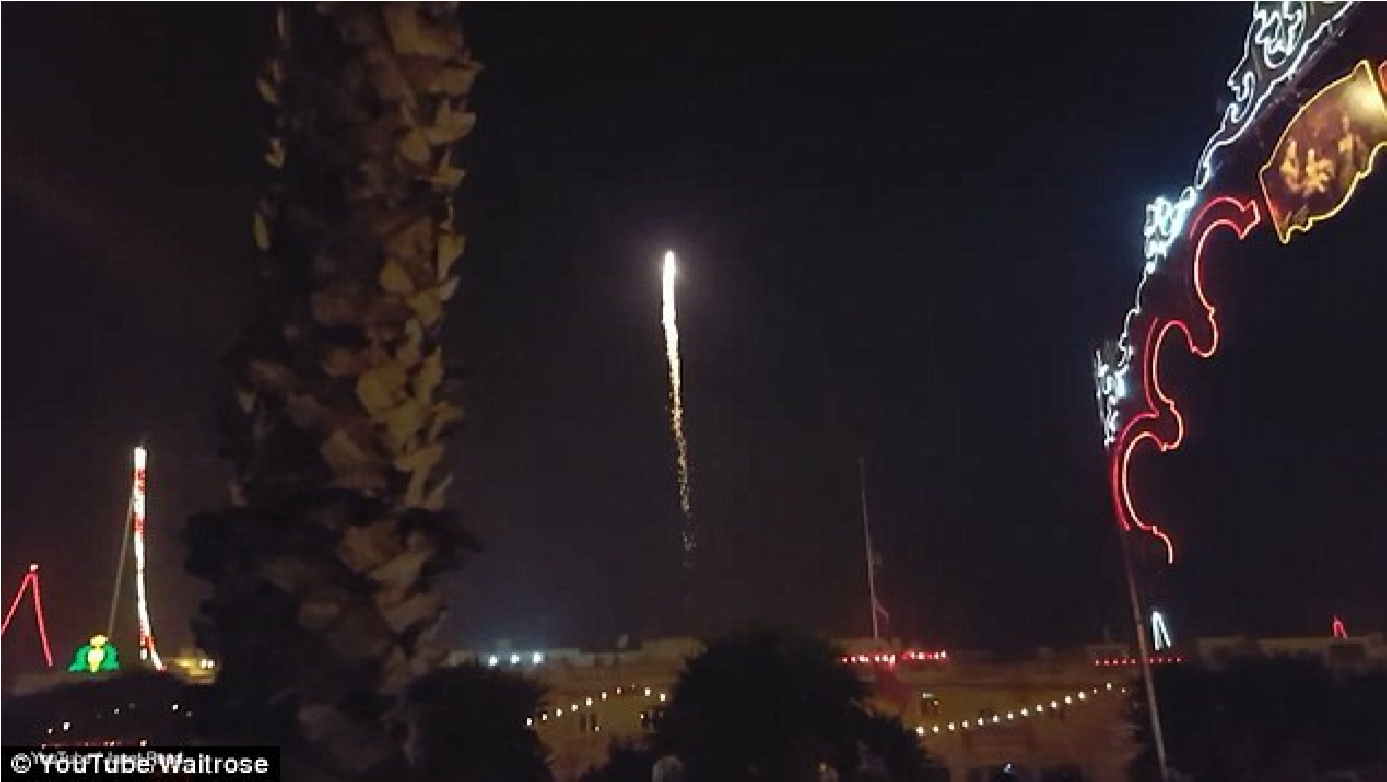