By Kirby Vickery from the July 2015 Edition

In a lot of cases of mythological lore there are stories to teach or demonstrate. As such they have a tendency to carry an absolute power somewhere to add to the educational weight of whatever the story is about. What a person finds in an allegory from one culture that person can find in another. The Aztec or Nahua mythology is a lot newer than that of most other cultures. Historically, the reason is easy. The Aztecs were Johnny-come-lately within the world of developing man. This is probably due to their isolation from the rest of the modern world. For example, the pyramids of the Aztec are closer in time to today than they are to the great temples of Egypt. The Egyptian pyramids were built several thousand BCE (Before Common Era) while the Pyramids (folk lore and the society) from the Aztecs are only a few hundred years old. The point I’m trying to make is the commonality of reason or cause for each story. Here is a small story about an Aztec rag-picker making a living in what is now known as Mexico City. There is a moral here as with Aesop’s Tales of Roman times. That moral is blatantly obvious but it’s a cute story anyway that illustrates to the Aztecs that you don’t really need a god or two behind a parable, possibly,

just a little of their power.

At one time there was an old bent over rag picker who frequented the area around the temple of Hoitzipochtli to work at his business. One day, he happened across a painted book near the foot of the temple. Not being educated he took it to a priest to help decipher the glyphs so he would know what it said. The priest agreed to his request and told him what it was all about. The priest told him that it was a book that told of the secret location of a magical casket hidden under the ninety third step of the pyramid.

After a quick pow-wow the priest and the rag picker decided that they would spilt any loot or treasure they might come up with. They mounted the temple and climbed up to the ninety-third step. There they discovered that it was just a little loose and they started to work it free. When they finally got the step upturned they discovered a  good sized cask underneath which was bound up with a silver chain. Forcing it open they discovered that it was full of some pretty wonderful things: It had a magical rattle, a drum stick, a mirror that would show the past or the future, a magical wand, an almanac and a book of sorcery.

“My friend,” the priest said. “I have to tell you that these are all sacred items and you don’t know to use any of them and as I am a priest, I and not allowed to teach or show how they are used. Because I am a priest, I know what they are for and how to use them for everyone’s benefit. For that reason they are valuable to me and I can give you three hundred pieces of gold for your half of the treasure. 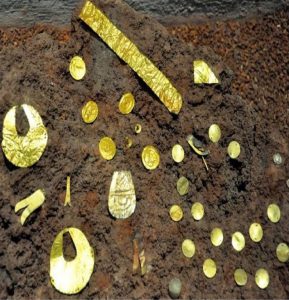 The rag picker wasn’t happy with the arrangement but agreed to it anyway because he knew he wouldn’t get a better deal. When the priest turned his back on the rag picker and started to count out the three hundred pieces of gold, the rag picker quickly picked up the magical wand and smacked the priest in the back of the head instantly killing him. “See, it’s not hard to use these things.” The rag picker said as he dumped the priest’s body in the lake and collected the rest of the loot back into the cask. His intent was to study these sacred magical artifacts in a place where he had the time and the privacy.

But his quest didn’t go at all well because he really didn’t understand what he was doing. First of all he couldn’t read the almanac because he didn’t know how to read. The mirror that showed him the past and the future just confused him because he didn’t understand anything he saw. The book of sorcery was just a bunch of gibberish to him. When he shook the rattle it made such a strange combination of sounds that he grew frightened of it and had to put it down. He started to dream of these things and of the demonic spirits which inhabited them. Then he found he couldn’t get to sleep thinking of them. “A curse on all these things!” He yelled to an empty room. “They are bringing me nothing but grief.”

It was the morning of the forth day as sun was just rising when the rag picker tossed the repacked cask full of magical treasure into the waters of the lake. As soon as that silver chained cask hit the water the priest jumped up out of the lake about three or four feet while holding the sacred cask. Its magic had made him alive again. He quickly floated over the water toward where the rag picker just stood while staring at him. As he floated, the cask opened and the magic wand floated up into his hand. As soon as he got close enough, the priest took hold of the magic wand and smote the rag picker as hard as he could which killed him instantly. And from then on the priest carried the sacred items with him, where they never did any more harm to anyone.