By Terry Sovil from the June 2011 Edition

Valentín Gómez Farías was born in Guadalajara, Jalisco, February 14, 1781. His father, José Lugardo Gómez, was a merchant and his mother, Maria Josefa Martínez y Farías, was from a notable family of Saltillo, Coahuila. He is an important figure in early Mexico.

He studied medicine at the University of Guadalajara and obtained his degree in 1807. He was well read in current French texts on medicine and political theory. He was appointed professor of the university in 1810 and practiced medicine until 1820. He married Ysabel López on October 4, 1817 and they had six children. Two died in their infancy

During this period there was a great surge of nationalism in the newly independent Mexico. Gómez Farías became active in the politics of the time. He became part of the national congress and went to Mexico City. His efforts to oppose a strong central authority are closely tied to Texas history. In 1822, as congressman, he proposed a law to invite foreigners to settle in unpopulated areas of the country, but prohibited them from bringing slaves.

Gómez Farías favored removing restrictions on American immigration to Texas put in place in 1830. He also determined that colonist’s petitions for Mexican statehood in Texas had to wait for government approval. He ordered the arrest of Stephen Austin after Austin wrote his letter of October 2, 1833 recommending that colonists establish their own state authorities without waiting for government approval.

In 1833-34, having served as both a representative and a senator, he became vice-president and served as president during Santa Anna’s absence. The Congress made an effort at “reformation” of Mexican society with measures that impacted church held property, church participation in education and judicial privileges the church held.

In 1834 Santa Anna returned and stopped restrictions on the church due to the public outcry. He was also displeased with the violent methods used to enforce them. This began a “counter-reformation” that removed many of the reformative laws and the federal system. Gómez Farías fought with any assistance he could find against the centralization of the country. As part of that effort he participated in the confrontation between the Mexican state of Coahuila, who claimed Texas, and Texas colonists in the spring of 1835. From there he went to New Orleans and participated in meetings on separatist tendencies.

In 1838 he sympathized with a French blockade that threatened Centralist authorities in Mexico. He expressed that if he were in power he would recognize Texas independence. Between 1841 and 1843 he visited the Yucatán and supported a local movement for the secession of the Republic of Texas from Mexico. In mid-1844 he began to believe that any peaceful solution with Texas would bring foreign interests from the United States, Great Britain or France. He became a strong opponent of a peaceful solution with Texas. He caused problems for the administrations of Santa Anna (1841-44) and José Joaquín de Herrera (1845).

The rebellion of Ayutla overthrew Santa Anna and Gómez Farías was elected again to Congress.

This assembly drew up the Liberal Constitution of 1857. Due to an illness he could not participate regularly in the debates but his efforts to establish Federalism and modernize Mexico were recognized by his fellow congressmen. He died in Mexico City in 1858. 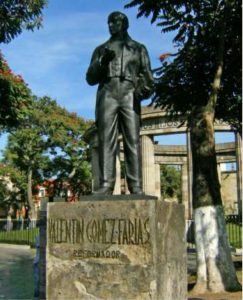