(The following is a slightly embellished and bit fictionalized account of an almost real event!)

Yesterday while flying home, trapped at an altitude of 39,000 feet, one sat next to me. Our (dare I call it such) conversation went somewhat like as follows:

As, finally, our plane began its race down the strip toward take – off, I once again struggled to find some sort of common area of interest so I mentioned how we had renovated our home and gardens.

He said that he, as well not long ago, had undertaken such having converted an old anthracite coal mine in West Virginia into a 40,000 square foot home, including an Olympic sized swimming pool, Jai -Alai court and airplane landing strip capable of taking 767 size crafts.

With calluses forming on my inner ears, undaunted, I bravely “stayed the course” on this topic saying how we had textured an accent wall in our family room and how nice it looked.

Amazingly, brief for him, he told me how – while repeatedly riding a carbon based unicycle from end to end – he had overseen the rehabilitation and rebuilding of the Great Wall of China.

In a window seat, squashed against the fuselage with his corpulence well lapped over in my space, with great effort I crossed my legs. So doing, I noticed my new, ragged seamed Crocs shoes that I enjoy so much and mentioned the fact.

Archly he intoned how he had his own shoes from leather that he personally tanned from the belly skin of virginal dromedaries fed only sweet aphelia grown by irrigation of spring water in farthermost reaches of southeastern Egypt.

All but speechless – by this time, a common experience – I endeavored to return to more basic topics saying that I was heading home after a pleasant visit with friends in Oklahoma.

He puffed out his chest and said he was heading south to hike the Andes, scuba dive the deepest part of Lake Titicaca, then canoe off the Strait of Magellan, followed with a visit to see his Godson – the rightful heir to the Mayan God, Kukulkna; the Quiche as Gukumatz – and part-time Guatemalan brain surgeon.

OK, I thought, keep it simple. So I told him how I had an old Nissan pick up that got nearly twenty miles per gallon.

With a contemptuous snort, he said he had converted his Ferrari to run on tap water, his Lamborghini to purr along at well over 200 miles per hours stoked only by the juice drawn from lawn clippings and his Testarossa to substantially exceed factory expectations powered only by table scraps.

Failing miserably in the automotive arena, I thought perhaps talk of spouses might be a good thing. So, I mentioned how my Patty was a good cook, fun golfer, superlative poker player and my best friend.

He said that his had been a Nobel Prize nominee for her research in replacing the ozone depletion with a soy substitute, was the actual brain behind Emeril, his TV cooking show and his restaurants, and was the personal tutor and coach to Phil Ivey, Daniel Negreanu, Jamie Gold and Peter Eastgate of the World Series of Poker.

Turning to look out the window while I attempted to digest all of that, I finaly turned back and meekly mentioned how I had briefly met and shook hand with California Governor Arnold Schwarzenegger.

He then proceeded to tell me how, several weeks ago, he had leg wrestled with Pope Benedict XVI, thrown knife mumblety-peg with President Obama last week on the Whitehouse lawn and, not long ago while she was home during Congressional Recess, has skinny dipped with Speaker of the House Nancy Pelosi. (Candidly, I found none of those mental images appealing in any manner!)

Hurriedly, I leapt into what I thought to be the most common of topics – yard work – saying how I dreaded the drudgery of mowing grass.

He said that such was no longer a chore for him as he combined that work with his daily fitness regime, employing a personally created technique of karate to trim hedges, lop off tree limbs and ensure the grass was evenly shorn.
Once more, finding myself at a loss of words, I eventually stammered out that I was heading home to Mexico where I enjoyed our sub-tropical flora.

To this he responded that he had created a new species cross, genetically altered, hybrid “vegimal” that was a cross between a rabbit, caterpillar and an apple that hopped off the tree, shed its skin jumped into the harvest bins ready for processing. 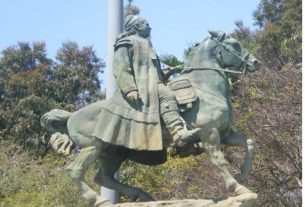