The Revillagigedo (rāvē’yähēhā’THō) Islands, also known as “Revillagigedo Archipelago” or “Islas Revillagigedo”, are four volcanic islands in the Pacific Ocean with a very unique ecosystem. Oddly, though far away, they have been a part of the Manzanillo municipality since 1861! They lie about 386 km (240 miles) southwest of Cabo San Lucas on the southern tip of the Baja and about 720 to 970 km (447 to 603 miles) west of Manzanillo. While a part of Manzanillo, Colima they are under Mexican Federal jurisdiction.

How does a widely dispersed island group become part of Manzanillo, Colima? President Benito Juárez signed a decree on July 25, 1861 awarding territorial control to the state of Colima. His intentions were to build an offshore penal facility on Isla Socorro. This never happened but the decree ceding them to Colima has never been repealed. And you thought Alcatraz was a bit remote?

THE FOUR ISLANDS ARE:

Together they form an area of 157.81km (59 miles) with the highest overall point at Mount Evermann at 1130m (3700’). There was a naval station established in 1957 in the south of the Socorro Island with a population of 250 (staff and families). Clarión hosts a small naval garrison of 9 men. The islands are otherwise uninhabited. The name comes from Don Juan Vicente de Guemes, the 2nd Count of Revillagigedo, the 53rd viceroy of New Spain (Mexico).

The “inner islands” are the three most eastern ones. These fall in the Mountain Time zone while most all of Colima is in the Central Time Zone. Clarión, to the west by more than 200km (124 miles) is in the Pacific Time Zone. The Revillagigedo Islands, along with Guadalupe Island and Rocas Alijos, are the three Mexican island groups that are not on the continental shelf.

These islands show no evidence of human habitation before their discovery by Spanish explorers. Hernando de Grijalva and crew discovered an island on December 21, 1533 and named it Santa Tomás (now San Benedicto).

Four days later they found another which they named Innocentes (now called Socorro, “Our Lady of Perpetual Succour” – help or assistance). Like so many remote islands, as they were “discovered” and “rediscovered” they got a new home.

Sir Edward Belcher, in 1839, made the first botanical collections. Andrew Grayson, an ornithologist, visited in 1865 and found what was named the “Socorro Dove” and the “Socorro Elf Owl”. Near the beginning of the 20th century Dr. Barton Evermann from the California Academy of Sciences promoted scientific study of the islands. The most comprehensive biological collections were obtained and the volcano on Socorro was renamed after him. March 21, 1972 saw Pablo Silva García, governor of Colima, became the first governor to visit. He placed a plaque to mark the event and Colima’s claim to the islands. 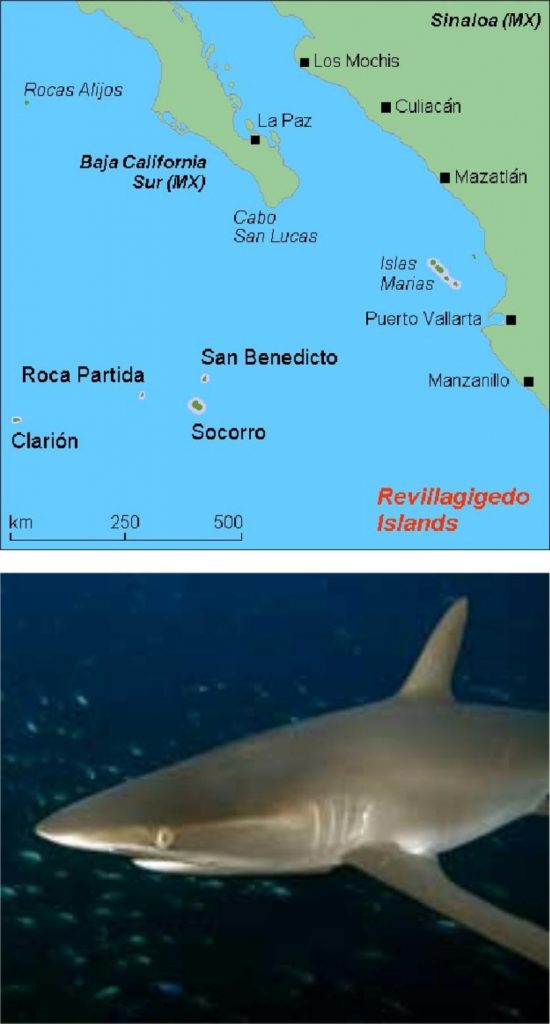 While no tourist facilities exist, there are no reliable sources of potable water, there are still visits every year. The seas around Socorro are popular for SCUBA diving where sharks and manta rays are seen. Most visitors are on live-aboard boats or expedition type vessels. This helps prevent the introduction of non-native, invasive, species.

The islands are home to many unique plant and animal species and are often referred to as Mexico’s “little Galapagos”. Isla Socorro is the most diverse in flora, fauna and topography. They were established as a Biosphere Reserve on June 4, 1994.The island of San Benedicto was wiped out by volcanic eruption on August 1, 1952 but has since recovered. Most all of the native plants on this island are also found on Clarión.

Most of the plants and animals seem to have come from mainland populations. Plants are most often from Baja California and reptiles seem to be from the Sonora-Sinaloa area. Still pristine in 1956, except for sheep introduced in 1869, the islands have since seen a lot of non-native introductions including feral cats. This has caused pressure on some native species that are now threatened with extinction.