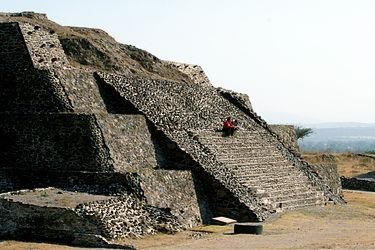 I’m really into a book written by Lewis Spence

(Published by Dover Publications, Inc. in 1994). Spence was a mythologist and died in 1955. The original publication of ‘The Myths of Mexico and Peru’ was published by George C. Harrap & Company Ltd. London., in 1913. Even though we have the Codex’ from the Aztec we don’t have anything about the culture of the Toltec.

Spence, in 1913, wasn’t even sure the Toltec nation even existed outside of having the Aztec use them as a starting point for most of the Aztec mythology. What’s really interesting is even with today’s modern archeology no one is really sure where the Toltec leave off and the Aztec begins. On top of that there’s still a controversy as to how the Toltec went away and why, versus how much of that was caused by the up and coming Aztec.

Did the Toltec’s actually exist? Absolutely! Their culture and mythology blend into that of the Aztec wonderfully. What seems to be in question is the relationship and time frame. The Nahua speaking people were a quagmire of small warring tribes all falling over one another to obtain supremacy as the Aztecs did in the central southern Mexico area not to long before the European showed up.

One could argue that these wars were mostly for the gathering of warriors from the enemy to be used for religious slaves and sacrifice on the local alters.

However, I’m not going to go there. Cortez even had some tribes fighting for him against the Aztecs. Some of whom were disappointed that the new Christian religion didn’t have human sacrifice.

Within both mythologies there was a supreme god manifested in human form. Quetzalcoatl, as he was known to the Aztecs was conflating with the Toltec Ce Acatl Topiltzinas as he was known to the Toltecs, a ruler of the city of Tollan later called Tula. This ruler -God was one of the key reasons Cortez had such an easy time of it when he took over the empire. According to Spanish history when Cortez landed the Aztecs recognized him as the returned Quetzacoatl. This fulfilled the Toltec prophecy of the Feathered Serpent-God returning. (Yes. You guessed it. All in what is now Veracruz.)

The Departure of Quetzalcoatl:

The Toltecs were so tormented by the enchantments of Tezcatlipoca that it was soon apparent to them that their fortunes were on the wane and that the end of their empire was at hand. Quetzalcoatl, chagrined at the turn things had taken, resolved to quit Tollan and go to the country of Tlapallan, whence he had come on his civilizing mission to Mexico. He burned all the houses which he had built, and buried his treasure of gold and precious stones in the deep valleys between the mountains. He changed the cacao- trees into mesquites, and he ordered all the birds of rich plumage and song to quit the valley of Anahuac and to follow him to a distance of more than a hundred leagues. On the road from Tollan he discovered a great tree at a point called Quauhtitlan. There he rested, and requested his pages to hand him a mirror. Regarding himself in the polished surface, he exclaimed, “I am old,” and from that circumstance the spot was named Huehuequauhtitlan (Old Quauhtitlan). Proceeding on his way accompanied by musicians who played the flute, he walked until fatigue arrested his steps, and he seated himself upon a stone, on which he left the imprint of his hands. This place is called Temacpalco (The Impress of the Hands). At Coaapan he was met by the Nahua gods, who were inimical to him and to the Toltecs.

“Where do you go? they asked him. “Why do you leave your capital?

“I go to Tlapallan,” replied Quetzalcoatl, “whence I came.”

“For what reason?” persisted the enchanters.

My father the Sun has called me thence,” replied Quetzalcoatl.

“Go, then, happily,” they said, “but leave us the secret of your art, the secret of founding in silver, of working in precious stones and woods, of painting, and of feather-working, and other matters.”

But Quetzalcoatl refused, and cast all his treasures into the fountain of Cozcaapa (Water of Precious Stones). At Cochtan he was met by another enchanter, who asked him whether he was bound, and on learning his destination proffered him a draught of wine. On tasting the vintage Quetzalcoatl was overcome with sleep. Continuing his journey in the morning, the god passed between a volcano and the Sierra Nevada (Mountain of Snow), where all the pages who accompanied him died of cold. He regretted this misfortune exceedingly, and wept, lamenting their fate with most bitter tears and mournful songs. On reaching the summit of Mount Poyauhtecatl he slid to the base. Arriving at the sea-shore, he embarked upon a raft of serpents, and was wafted away toward the land of Tlapallan.

This legend and others bear some resemblance to those of Ixtlilxochitl which recount the fall of the Toltecs. They are taken from Sahagun’s work, Historya General de Nueva España.

This story only tells of Quetzalcoatl’s leaving. It was foretold that he would return. It is significant because it ties so many things together and yet separates others in indigenous American history and mythology. The first thing to consider is its reality. The serpent-God left the Toltecs at a time when their power was growing within the region in some tellings and waning in others. What’s important is the fact that it is the same myth in both cultures and it tells of the downing of one of them and foretells the downing of the other when Cortez is taken as Quetzalcoatl’s return. Was he real? I wonder. This, with other forecasting, through the mystics and priests, really puts the Aztecs ahead in that game. Well enough to bother some people of science even today.

Possibly we should go back to human sacrifice at least to foretell the results of the next American Presidential election. 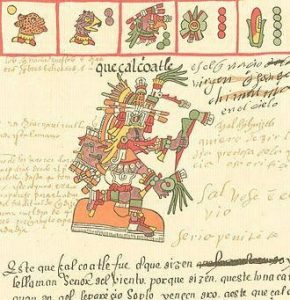 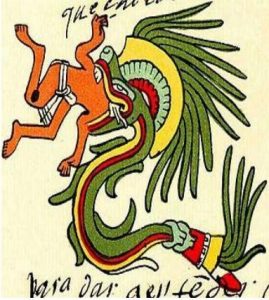 Recipe for a New Year’s Party in Mexico

The Magnificent Ebb and Flow of the English Language