By Kirby Vickery on the February 2021 Edition

In ancient times, when there were no clocks and time passed slowly and nothing mattered because life was slow and comfortable. The people’s duties in this time were few and not time consuming and so they would look for recreational activities.

Jun aj Pu and Ix B’alam Kej, the sacred twins who founded the universe, loved to play “The Game.” Thump! Thump! Thump, went the ball as it bounced off their knees, shoulders, hips and thighs as well as the walls of the ball court. Thump it went when they gave it a header aimed for the loop against the wall.

Meanwhile in the Underground, the Lords of Evil heard all this thump! thump! thumping of the ball and yearned for a quieter time. Many, many years earlier they had defeated the twins’ father in that very same game.

“Someone is playing above us on Mother Earth,” they said. “It must be the twins, Jun aj Pu and Ix B’alam Kej. In order to get some peace and quiet, we’ll challenge them to a game, just as we did their fathers.” And so they sent a louse with the message to come down at once to the kingdom of the Lords of the Underworld to play ball.

All at once, as if by magic, the louse fell onto the lap of the twins’ grandmother in the land of the light. “Grandmother,” the louse said. “I come from the Lords of the Underworld with a message for Jun aj Pu and Ix B’alam Kej. They must appear within a week to play ball against them.”

The grandmother replied, “But how can I tell them? Their court is very far away and I can barely walk?”

“Don’t worry,” the louse answered. “I’ll go and tell them myself.” And the louse flew off toward the field where the twins were playing. But, please realize, he was a tiny louse and he could only fly ten yards an hour. “I’ll never get there in time,” he thought, as his bravado was slowly giving way to reality.

Just then he bumped into an old friend [in those days], a toad, who said, “Where are you going, louse, so eagerly and so quickly, even for you?”

I have to get to the ball court with a message for the twins from the underworld gods. But, at my speed, I’ll never get there,” he explained, all aflutter while trying to catch his breath.

“Don’t worry,” his friend answered. “I’ll give you a hand.” And gulp! Out flashed his long tongue and he swallowed the louse and started to run. You see, back then, toads had four very normal legs. Still, after an hour, he had only gone a hundred or so yards and the ball court was still very far away. “I’ll never get there in time,” he thought.

Just then he bumped into a huge snake. As you may have guessed, in those days, toads and snakes were good friends, and they’d spent the afternoons chatting away.

“Where are you going in such a hurry?” the snake asked. 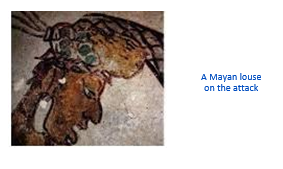 “I have a message for Jun aj Pu and Ix B’alam Kej” said the toad, “but no matter how fast I run, it’s not fast enough.”

“Please don’t worry,” the snake replied. “I’ll help you. And, with a quick hiss and lunge, gulp! He swallowed the toad. And then, true to his word, he began to quickly slither away while making a racket like the wind blowing through the leaves. He was crossing a field when an eagle flying in the sky spotted him.

“I wonder where the snake is going so quickly?” he asked him-self. He shot down to the field like an arrow and landed right in front of the snake. “What’s wrong, snake? What’s your hurry?”

“I have an urgent message for the twins, who are playing ball, but at this speed, I won’t get there in time!” cried the snake.

“Don’t worry,” the eagle told him. “I’ll help you out. With that, he swallowed that serpent! And the snake, rattles and all, ended up in the eagle’s belly.

The eagle rose into the air and was soon flying over the field where the boys were playing.

The twins, who were great hunters, saw the eagle and weren’t going to let their chance escape. Bock! Bock! Bock! They shot him down with their blowguns with a dart to his eye.

Curious to hear what he had to say, the twins magically healed the eagle’s eye. “Now give us the message.” 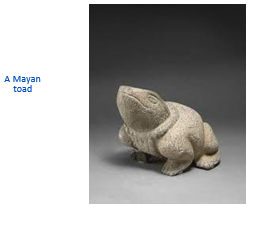 “I have it here in my belly,” he said. And, he coughed up the snake. The twins asked the snake, “Tell us what the message is!” they demanded.

“I have it here in my belly,” The snake said. And he coughed up the toad.

The twins looked at the slimy mess on the grass with a very unhappy toad in the middle of it. “What’s the message, they repeated?”

But the toad couldn’t speak because the louse was stuck be-tween his teeth. He could only make gnashing, and burping sounds. 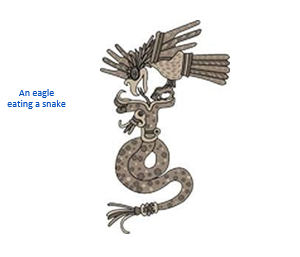 The twins got angry, because they thought he was making fun of them. And without caring, they threw a rock at the toad and broke his legs. Which is why toads hop along the ground today.

The blow forced the toad to spit out the louse who finally gave the twins the message: “The Lords of the Underworld are wait-ing for you in their kingdom under Mother Earth to play ‘The Game’.”

And so, the twins went to play ball with the Lords of the Underworld. From then on, it was established that toads eat in-sects, snakes eat toads and eagles eat snakes.

That’s how things happened in those ancient times.