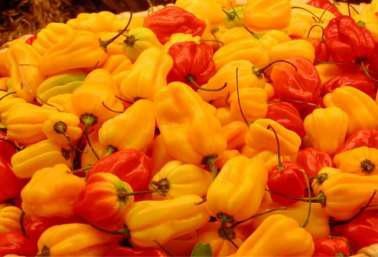 By Vivian Molick from the January 2011 Edition

No matter how you spell it… chili, chilli, chile, chillie… the pepper of this name is a member of the nightshade family of Solanaceae, a fruit of plants from the Latin name ‘Capsicum’. The name is taken from the Nahuatl chilli, but the most common spelling of the word is chili; therefore, it is the spelling used for this article.

Peppers are commonly broken down into three categories: bell peppers, sweet peppers, and hot peppers. This article is addressing the hot pepper family. Even though the chili pepper is technically a fruit, it is generally used as a vegetable or spice.

Chili peppers are native to South and Central America. The earliest evidence of the peppers in the American southwest/northwest Mexico was identified in the state of Chihuahua near the site of Casas Grandes, approximately 1150-1300 AD. Even so, the chili pepper did not become a major part of southwestern US/northwestern Mexican cuisine until after Spanish colonization of the region. There is archaeological evidence that chili peppers were domesticated more than 6,000 years ago and is one of the first cultivated crops in the Americas that is self-pollinating.

Christopher Columbus was one of the first Europeans to encounter the chilies in the Caribbean and called them ‘peppers’ because he found their taste similar to the Old World black peppers. When he first brought them back to Europe they were grown in the gardens of Spanish and Portuguese monasteries. The monks experimented with the chili’s culinary potential and discovered that their pungency offered a substitute for black peppercorns, at which time, were so costly that they were used as legal currency in some countries.

Columbus’s voyages spread the pepper plantations all over Spain and America, from where every explorer carried it with them to different shores of the world. (From Mexico they quickly spread into the Philippines and then to India, China, Korea and Japan.)

What makes a hot pepper hot? The most-noted substance is capsaicin plus several lesser chemicals, which are collectively called capasaicinoids. The capsaicin is the primary ingredient in the pepper 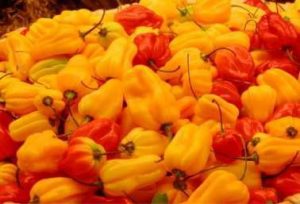 (spray) used as an irritant weapon for self-defense. When these capsaicinoids are consumed they bind with pain receptors in the mouth and throat that are responsible for sensing heat. Once activated by the capsaicinoids, the receptors send a message to the brain that the person has consumed something hot. The brain responds to the burning sensation by raising the heart rate, increasing perspiration and the releasing of endorphins.

Capsaicin can be very irritating to the eyes and the oil can stick to the skin; the best thing to do is wear thin rubber gloves while handling the peppers. If you want to enjoy the pungency of peppers but minimize their heat, remove the seeds and fleshy white inner membranes where the capsaicin resides. Soaking a chili pepper in vinegar has the effect of distributing the hot chili flavor throughout the liquid. Discarding the vinegar and soaking again has the effect of further reducing the heat. Fresh peppers can be hung in the sun to dry and can then be used to make ground chili powder. As a general rule, dried pods are up to ten times hotter than fresh pods.

Capsaicin is not water-soluble it is soluble in fat and alcohol. Don’t drink water to cool your mouth after eating very hot chilies; drink milk or beer, or eat some ice cream or guacamole if your mouth is on fire.
In 1912 Wilbur Scoville, an American chemist invented the Scoville Heat Index that ranks different types of peppers, from the mildest to the hottest. This measurement (known as ‘Scoville Heat Units’ SHU) designates how much a chili extract must be diluted in sugar syrup before its heat becomes undetectable to a panel of tasters. Bell peppers rank at 0 SHU, and New Mexico green chilies at about 1,500 SHU. A couple of the popular ‘mildly hot’ peppers (from mildly hot to hot) are the Jalapeño (2,000 – 8,000 SHU) and the

Chili peppers are known to have many health benefits, such as: fighting inflammation, a natural pain reliever, reduces blood cholesterol and triglyceride levels, and increases the body’s ability to dissolve fibrin (a substance integral to the formation of blood clots. The capsaicin not only reduces pain, but its peppery heat also stimulates secretions that help clear mucus from your stuffy nose or congested lungs. It also helps boost the immune system, helps stop the spread of prostate cancer cells, prevents stomach ulcers (yes, prevents stomach ulcers; by killing bacteria you may have ingested and stimulating the cells lining the stomach to secrete protective buffering juices), lose weight, and lower the risk of type 2 diabetes. The peppers also contain antioxidants, including vitamin C and carotenoids, which might also help improve insulin regulation.

An interesting bit of information about hot peppers is that in Africa the farmers use them as an effective crop defense against elephants. They spread the chili peppers on fences and other structures to keep the elephants away. Because elephants have a large and sensitive olfactory and nasal system, the smell of the peppers causes them discomfort and deters them from feeding on the crops.

Another interesting fact about the chili pepper is that birds do not have the same sensitivity to capsaicin that mammals do, where it targets a specific pain receptor. The birds distribute the seeds by dropping them while they eat the pods, the seeds pass through the digestive tract unharmed. Products based on this substance are sold to treat seeds in birds’ feeders to deter squirrels, and such, without deterring the birds. 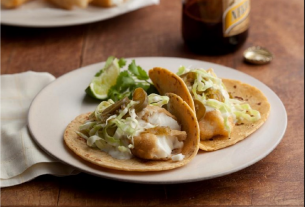 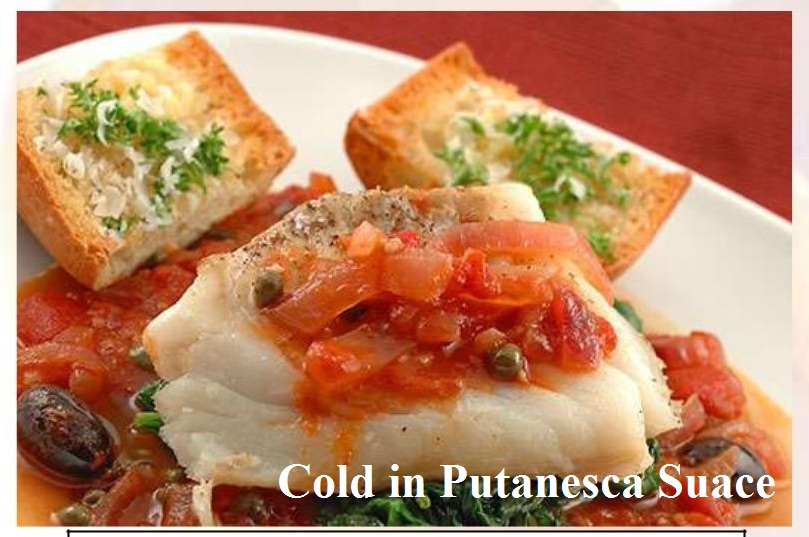