The Sea Scouts have come to Manzanillo! The troop Poseidon, called a “ship”, was formally approved and launched on 20/Mar/2010 at Las Hadas Marina, Manzanillo in a beautiful ceremony. Other Scout troops from Manzanillo and around Colima attended to welcome their newest troop. Poseidon is Boy Scouts Group 7 in the state of Colima but the only Sea Scouts troop. Poseidon becomes the 4th Sea Scouts group in Mexico joining Spirit of Okoboyi in Puerto Vallarta, Stella Maris in D.F. and Stella Maris in Veracruz. Captain Joel Fogel was present as were representatives from the Las Hadas Marina staff. 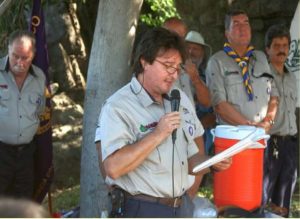 The Manzanillo Poseidon Troop is being led by Guillermo Gomez Espinoza and Manny Quiroz of Schooners Restaurant. There is also local support from other volunteers including Dennis Breun.

Sea Scouts is an adventure on sea and land and is a co-educational program for young adults between the ages of 14 and 21. They promote better citizenship; improve boating skills, water safety and knowledge of our maritime heritage. Social events and excursions are also part of the experience. These activities help The group has access to a sailing vessel and everyone will get a chance to trim sails and learn to handle a boat safely. They will learn the meaning of buoys and lights, how to take advantage of the winds and tides, how to drop anchor and how to dock. In addition, other diverse skills will be taught including cruising, knots, splices, reading charts, “rules of the road” for boating, basic engine maintenance, electrical systems, food preparation in a galley, provisioning for a cruise, cardiopulmonary resuscitation, first aid, swimming, lifesaving and even SCUBA certification. They will participate in day, weekend and longer cruises on the boat.

Boat owners take pride in the condition of their boat. Every season there is sanding, caulking and painting that must be done. Part of the Sea Scouting program is to teach and learn methods of boat 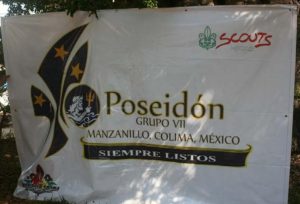 maintenance. The Poseidon group will center a portion of their training on their vessels maintenance.Sea Scouting started in England when Lord Baden-Powell suggested that older Scouts might be interested in learning about seamanship to prepare for service on their country’s ships. It was well received in England and found it’s way to the United States of America in 1912. The first Sea Scout manual was published in 1915 with base material coming from a pamphlet compiled by Charles Longstreth titled “Nautical Scouting”.

Sea Scouting struggled with little guidance from 1912 to 1917 but still managed to grow. The program got a real boost in October, 1917 when James Austin Wilder (veteran sailor, global traveler, artist and Boy Scout volunteer) became Director of the Department of Sea Scouting of the Boy Scouts of America. He worked for several years as the Chief Sea Scout.

Under Wilder’s direction he helped disparate Sea Scout units form a national organization that helped spread interest. He organized information, literature, people and knowledge to prepare the first Sea Scout Manual in 1919. By July 15, 1920 the 4th edition of the Sea Scout Manual, with illustrations, sold in large quantities. For the next 2-3 years the organization struggled but withstood.
It began to grown as more scouting councils gave it enthusiastic support. 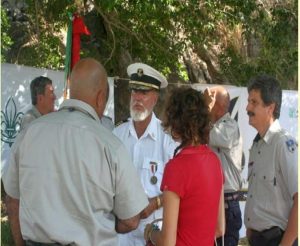 By 1930 membership had reached 8,043 men in the USA. With cooperation of other national office departments in the USA new training courses for leaders, new registration procedures, better Sea Scout uniforms and equipment were developed. A National Sea Scouts flagship competition was developed in 1928 and is still used in varying forms today.

Sea Scouts in the thousands joined the USA Navy during World War II and made a big impression on Admiral Chester Nimitz who believed they were better trained and better equipped to help the Navy win the war. The program continued to expand, evolve and keep pace with new technologies and equipment. In 2000 a new edition of the Sea Scout Manual was published and in 2002 the Sea Scout sailing championships were re-initiated.

The Sea Scouts in Manzanillo have adapted a rich, multi -nation and multi-cultural program with which to launch their new Poseidon troop!