By Terry Sovil from the July 2017 Edition

The Green Flash should not be confused with the DC Comics “Flash” and/or mixed with the TV show “The Green Hornet”. Manzanillo has a reputation for deep-sea fishing and a certain quality of sunsets that can display The Green Flash. Being on the same latitude as Hawaii and the Cayman Islands puts us in good company for this phenomenon. It is said that once you’ve seen a green flash, “you’ll never again go wrong in matters of the heart”.

Some will tell you that it isn’t real. But the green flash can be seen in many different places. Our problem, in our sub-tropical zone, is that the sunsets don’t last as long as locations farther north or south where the sun takes longer to set. Key West, Florida is a famous place to observe a green flash. I watched  for one in Key West once. I didn’t see one but I did see Leon Russell standing there looking for it too.

The Green Flash is a green flash because more green light gets through and therefore is more clearly seen. Sometimes, when the air is especially clear, enough of the blue or violet light rays make it through the atmosphere, causing a blue flash to be visible. However, green is the most common hue reported.

What is a green flash? As the sun sinks into the horizon, the light passes through our thick atmosphere, which scatters blue and green light, making them disappear. This makes the sun appear an orange-red. As it sinks farther, the atmosphere refracts (changes the direction when it enters at an angle) the sun’s light that is below the horizon.

When you see the sun just above the horizon at sunset, the  sun has already set. What you are seeing is an image refracted from below the horizon.

As the sun sets, we see only a sliver of light above the horizon. Air bends the colors and red disappears first since air bends green, blue and violet light more than it does red. So colors disappear in this order; red, orange, yellow, green, blue, and then violet. This is the essence of the green flash which lasts only a second or two as the sun changes color. 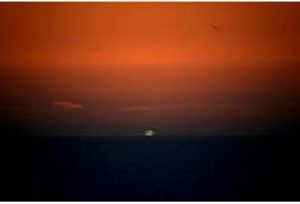 People talk about a blue flash, which you may be able to see if the horizon is very clear. If the air isn’t very clear it spreads the blue and violet light out leaving only green as the most common color that will make it to your eye when you watch the sun set.

What should I look for? The green flash happens when the sun has almost set entirely below the horizon when the slightest edge of the sun the upper edge is still visible. Just for 1 or 2 seconds the upper edge will appear green in color. The legendary green flash is brief! It would be a great reward, especially if you were specifically looking to see one.

How can you see one? There is never a guarantee! You need a clear day with no haze, pollution or clouds in the sky. You need a distant horizon and a distinct edge to the horizon. You are more apt to see one if the visibility is several miles, almost to the curvature of the earth.

You may be able to see one from a mountaintop or a high building, out on the open, flat prairie, or desert but the ocean  is where they are most often seen. The ocean makes most of the atmosphere visible and your line of sight is parallel to the horizon.

Be careful! Don’t stare at the setting sun or you will surely suffer eye damage. Instead, wait until the sun is almost down.

Glance towards the sun briefly with your peripheral vision.  And when you sense the sun has nearly set, take a careful look for this rare and beautiful sight.

Popular culture has a few references to The Green Flash. Jules Verne’s 1882 novel “The Green Ray” has a heroine searching for that phenomenon. Admiral Richard Byrd, a polar explorer, and crew claimed to have watched a “green sun” for 35 minutes on an expedition in Antarctica.

The easiest way to see one is to watch someone that has searched and photographed or filmed an event! YouTube has such a video, here: https://www.youtube.com/watch? v=lwus2nqU0SY by Juan Guerra, published on Mar 4, 2013, he says “No editing or tricks; this was shot in San Diego, California; using a Canon 60D @ 800mm (1280 – 35mm equivalent).” En- joy! You can see the sky, the sun and the horizon across a  great distance. This video has a very distinct green ring that forms. Hit the pause button a few times! There are two “flashes” the first at 1:21

This example, also on YouTube, combines several different sun- sets and includes some on-screen text describing what you are seeing, showing examples of color refraction etc. It covers  much of what I have mentioned above in a video. https://www.youtube.com/watch?v=mxTLzAToXfo 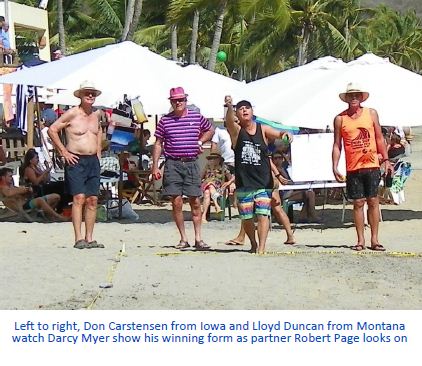