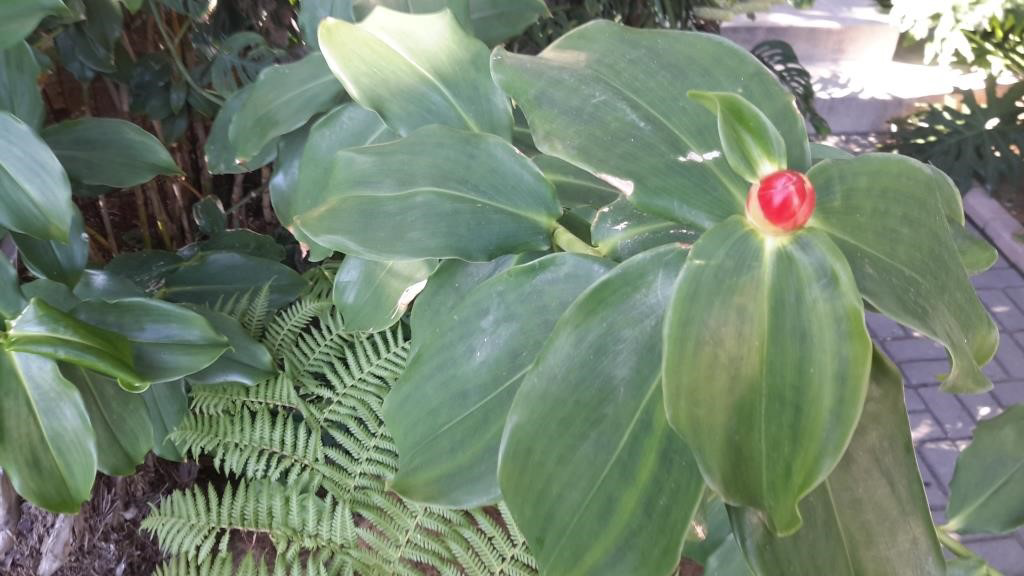 By Tommy Clarkson on the April 2020 Edition

Born with the appellation of Thomas one derived from the Aramaic personal name meaning “twin” I actually was such along with my “wombmate,” Rosemary. But, with age, one learns to not always trust in the truthfulness of simple designations, tags or titles particularly so with plant names, as I’ve well learned over the last few years. Such, however, is not the case with this plant as, upon observing this plant, one can, rather easily, discern its scarlet spiral flag . . . well, with a bit of imagination perhaps!

Growing up to twelve feet tall (3.66 meters), this perennial herb is much cultivated throughout the tropics for its intriguing, yellow to orange flora. Some botanists state that it is endemic to warm climates of Nicaragua and Colombia, while others, with equal fervor, assert their origin to be Panama and Costa Rica. (In the “for what it’s worth” category, we were definitely born in the temperate to downright winter cold climes of west-central Kansas – in December, no less!) But, back to the subject, upon delving into it, I did note in the Monaco Nature Encyclopedia, that all four countries were listed, where it further elaborated that there “it grows in the open forests along the coast or on the beaches in full sun.”

great source also stated that “The name of the genus was given by Linnaeus as homage to Dioscorides, who had de-scribed a plant, deemed similar, with the name of Kostos; the species is honored to the American botanist Robert Everard Woodson (1904-1963), curator of the herbarium of the Missouri Botanical Garden.” It went on to inform with “the Costus woodsonii . . . is an evergreen, perennial rhizomatous herbaceous species with slightly spiralled stems. . . (while its) bracts produce nectar which attracts the ants. . . the fruits are (small) white ellipsoid capsules containing black seeds with white flesh aril (etra seed covering) that favors their dispersion by means of the birds. ”

Its flowers stand in a most attractive contrast to its bright red, bracts. As Dr. Arthur Whistler describes them in Tropical Ornamentals, it is “distinguishable by the spirally arranged, ginger-like leaves, ovoid spikes covered with densely overlapping bracts and orange (to red-orange), scarcely opening, flowers.”

From Art’s home, Aloha State, I noted in Hawaiian Plants and Tropical Flowers, this elaboration, “these flowers emerge one at a time from between shiny, red, tightly overlapping floral bracts on round-tipped, egg-shaped to cylindrical inflorescences at the stem tips. The individual flowers remain almost closed and have a barely revealed yellow labellum (lower lip petal). Young plantlets emerge from the base of the old inflorescences and can take root if they touch the ground. The leaves are glossy, dark green, hairless, spirally arranged, drooping, and elliptic to egg-shaped. The cane-like stems emerge from underground rhizomes and are erect-to-leaning.” (In re-reading that it seems they do a lot of “emerging!”) 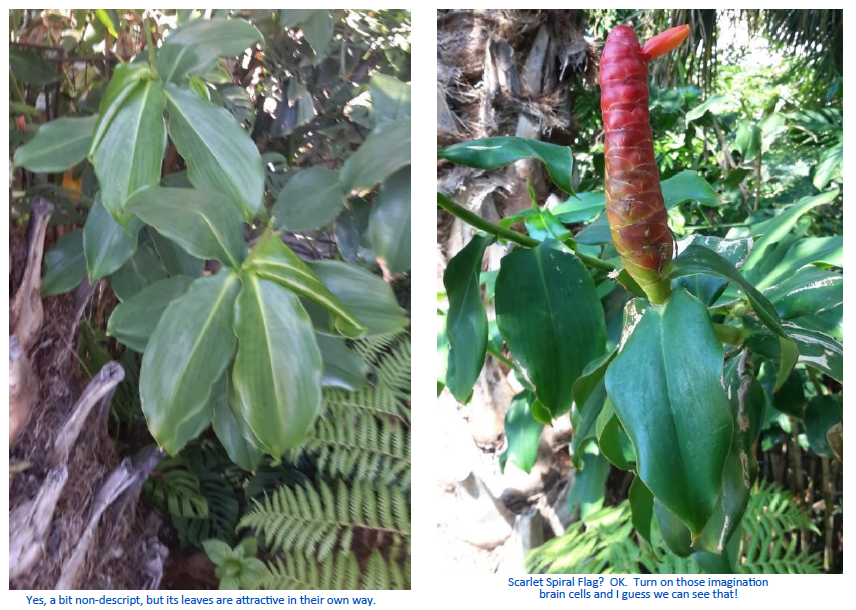 Ever the proper and precise one, Kirsten Albrecht Llamas, succinctly says of this plant in Tropical Flowering Plants, “Regular moisture. Fertile organically rich, well-drained soil. Bright filtered light . . . Leaves: narrowly elliptic, to eight inches long, maroon striped, slightly hairy beneath. Often confused with the West Indian species C. spicatus, (Was going to make a really lame joke about how, of all the movies it’s seen, it loves most to “See Spartacus,” but thought better of it!) which has elliptical leaves and a short, thick ovoid spike with a rounded apex.”

In that all living entities need to eat and drink, what of this character? As to water, they require copious, regular amounts and occasional misting. Regarding its meals, fertilizerwise,” every few weeks give them a diluted solution of liquid fertilizer. Propagation of the species? While I’ve not done it (e’rrrr. I mean as regards this plant). Such can be accomplished, I’ve read, by dividing its rhizomes, tubers, corms or bulbs including its offsets.

Here’s something else that I merely report but do not claim to be absolutely factual and, as of yet, have not tried for myself but so to speak it’s a “nugget to gnaw on!” Two different online sources stated the following somewhat similar information: (Its) “yellow flowers that emerge from the red cones are edible.” And “The tips of the buttons produce honey-like ginger nectar “straw” flowers which little kids loves to suck on.
They’re my favorite snack when I’m weeding.” H’mmmm.

The Coconut Palm (part 1)- I Planted Roots in Mexico