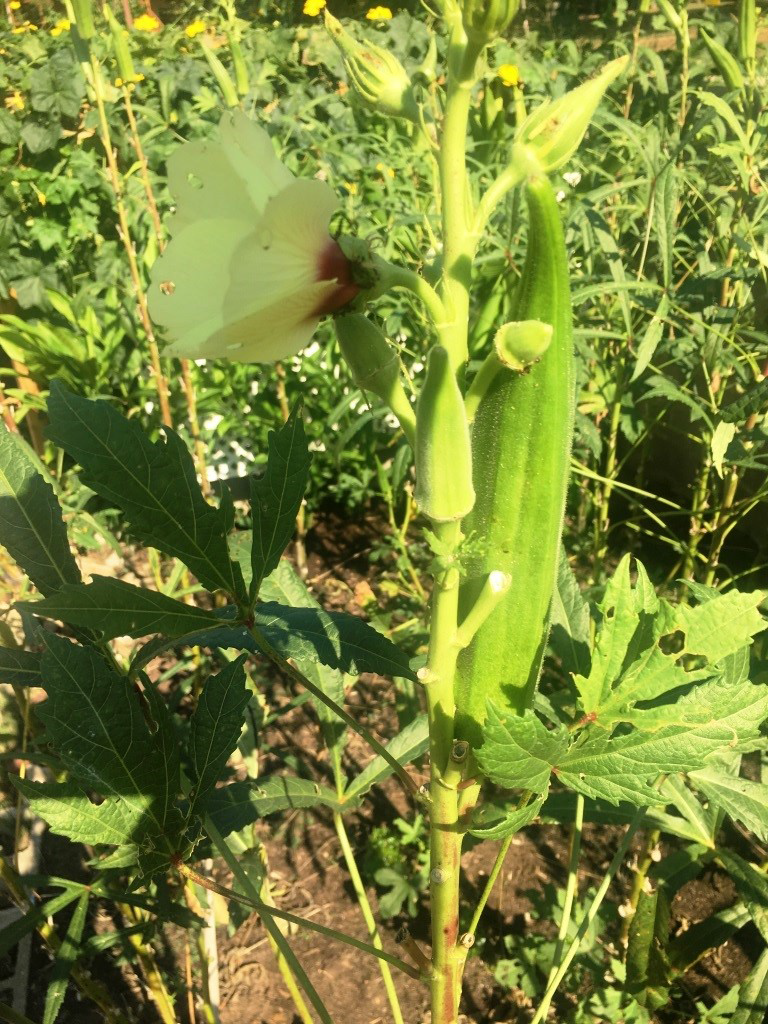 Question: Do you know where you can always find Okra? Answer: In the gardens of Okrahoma! (OK, now, a collective groan!)

Yes, this is, in fact, a perennial, though up north it is planted and harvested as an annual. But, I grant you, it is not one normally thought of as a tropical. However, they can easily be grown here and, as a result, periodically, I do so. They are thought to have originated in the hotter environs of Africa or southern Asia. But, beyond that, I admit to Patty’s and my simple Midwest tastes in, and appreciation for, what we might call core Kansas and Oklahoma garden vegetables. . . and, indeed, our mutual enjoyment of fried and pickled Okra!

But, were you aware that it is nutritious as well, having many health benefits? Okra is low in calories and carbs and it contains protein. (Remember, including enough protein in one’s diet is associated with benefits for blood sugar control, bone structure, muscle mass and weight management.) Additionally, Okra is rich in antioxidants, fiber, folate, magnesium, and vitamin C, K1, and A. Additionally, I’ve read that it is beneficial for pregnant women, heart health, and blood sugar control. So, if you’re a tab tubby quit looking at me have something red coursing through your veins, an organ throbbing in your chest, take note!

And, yes, it can be eaten raw, what with the entire okra plant being edible. The leaves can be consumed raw, in salads, for instance, or cooked like any other greens. It’s prepared much like asparagus, sautéed, or pickled. Often, it is used as an ingredient in stews or gumbos. Those unique-looking Okra pods can even be eaten in an array of manners. Boiled, they acquire a somewhat slimy texture mucilage-like but that is also quite good for you! And, here’s a bit of a surprise for you. In the Pujiltic, Chiapas area, here in Mexico, the seeds are purportedly roasted and ground to make coffee!

The leaves of the Okra plant are heart-shaped, three to five-lobed. The flowers look startling like a cultivar of Hibiscus being yellow with a crimson center. However, that’s understandable in that they are in the same botanical family, the Malvaceae. In point of fact, Jim Conrad shares, in his “Naturalist Newsletter”, that “in the old days (this plant) was even placed in the genus Hibiscus, as Hibiscus abelmoschus.”)

The pods (some call them fruits) are hairy at the base in a tapering 10-angled capsule form four-to-ten inches (10.16-25.4 cm) in length the exception being in the dwarf varieties and contain numerous oval, dark-colored seeds.

Conrad continues with further information of puzzling interest saying, “Its genetics (are) fairly kinky. It’s an “allopolyploid” whose genes have been gathered from three or more completely different species of parents. No wild okra species are known to exist.

The first report of okra pods being eaten are from Egypt in 1216. It was introduced into the Americas by ships carrying slaves from Africa.” He goes on saying, “One of the prime field marks for flowers of the Hibiscus family is that (their) stamens join one another at the bases of their filaments, often forming a cylindrical “staminal column” surrounding the pistil’s stigma tipped style.”

Should you wish to grow some, remember that Okra needs lots of full sunshine, planted in rich, well draining soil. Choose its location so as to not overshadow other plants possibly in a North South direction.

For the optimal results, before planting, add good compost or organic material to the soil. Water daily and fertilize weekly, as it grows fast!