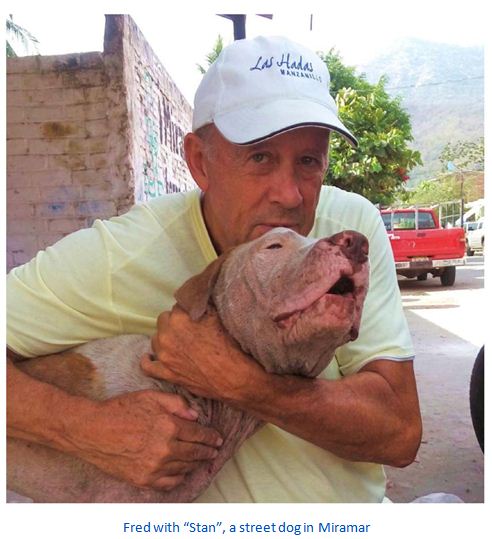 By Suzanne A. Marshall from the October 2017 Edition

Almost ten years ago, my husband and I were searching for property in what is now our home in 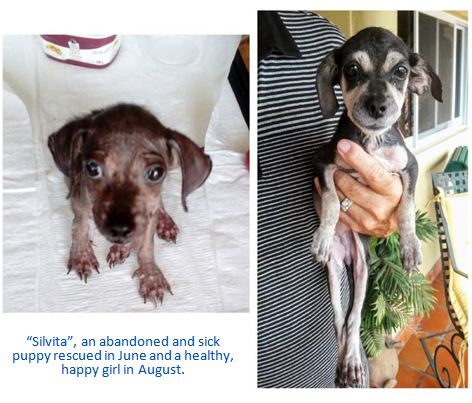 Manzanillo. I can still re-member seeing a terribly emaciated dog one day, curled up on the ground in front of one of the doorways. I wondered how this poor creature was still surviving and how this could happen in such a well-populated area. Could no one feed it and provide some water? I never saw him again and have wondered ever since about his fate. Unfortunately, a much bigger and sadder picture would unfold in the coming years.

“Silvita”, an abandoned and sick puppy rescued in June and a healthy, happy girl in August.

In the mid nineteen nineties, it was said that the stray animal population felt equal to the human population. It was not uncommon to see packs of 10-15 dogs roaming the street. Try to imagine the number of sick and starving animals all over the area. Something needed to be done to change this very sad scenario. Where to begin?

Thanks to the initiative of Friends of Mexican Animal Welfare (FOMAW), a US non-profit founded in 2009 by Stan Burnett and his wife MJ, the picture has improved little by little over time. But, there remains a challenging road ahead.

I recently had the privilege of meeting with key members of Animal Angels, a street animal outreach program of FOMAW. They are a small but dedicated group working tirelessly to improve the lives of local street animals while aiming to continue reducing the future numbers of local stray, orphaned and unwanted animals. 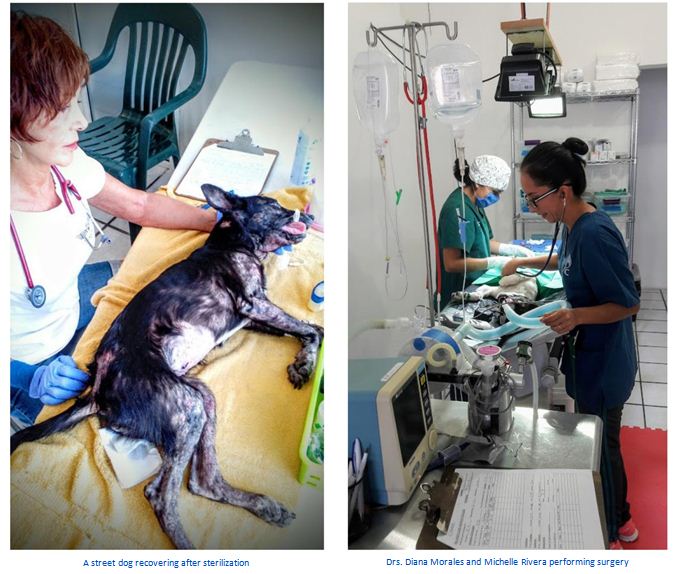 Even today, you can walk or drive through any of the Colonias in Manzanillo and see a lot of animal suffering; animals that are so thin all of their bones are showing; animals so sick with mange that they have no hair left and have open sores on their bodies; animals with large tumors, called TVT (transmissible venereal tumor) on their reproductive areas. It tugs at the heartstrings and makes one wonder how this much animal suffering is possible. 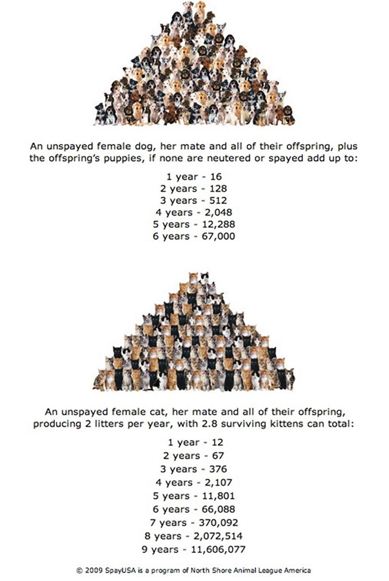 There is a solution! A solution that everyone who lives full or part time in Manzanillo can and should be a part of. “We believe the best antidote to animal suffering is sterilization” say Laurie and Fred Taylor. Since the last FOMAW fundraiser in January of this year, over 1000 animals have been sterilized.

What does this do and mean for the people of our community? First and foremost, it means fewer animals on the street. As depicted by the graphic, one mating pair of dogs can produce 67,000 in 6 years. One pair of cats can produce even more. Sterilization will eliminate thousands of animals from being born and continuing the cycle.

Animal population control and healthier animals have many benefits for the human residents of the community: fewer animals foraging in the garbage and creating an unsanitary mess; fewer dead animals in the street hit by cars; fewer sick and starving animals and less feces in the streets. More importantly, sick animals can and do spread contagious diseases to humans. Erlichia is a blood disease spread by ticks. Infected

ticks can also spread this disease to humans much like lyme disease. Dogs with mange can pass it to humans. Animal An-gels was recently working with some dogs in Miramar that had contracted mange. The dogs’ owners, a family of seven, was also infected with mange from their dogs. Healthy animals equal healthy humans! 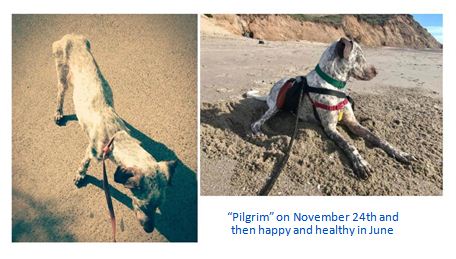 What are the costs to operate these initiatives? The monthly operating overhead, including salaries for two full-time veterinarians, for both Animal Angels and Alianza is about $56,000 pesos per month. Families bringing in their own pets are charged just $350 pesos. This fee does not cover the actual cost of sterilization but is low enough that it is readily afford-able to the community. 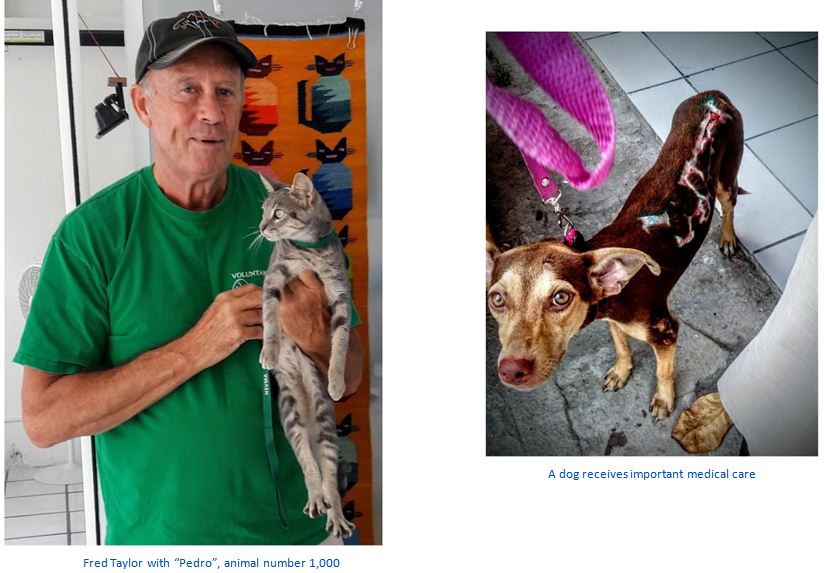 Over and above the huge amounts of volunteer time, consider what’s involved:

Is it working? Yes indeed, though the numbers still need to come down and can continue to decrease with your help and cooperation.

Someone once said, “It takes a village” and indeed it does in this case. Not only does it take a village but it takes money. How can we, as a community, help? Well of course volunteering time is an essential. Ongoing donations to FOMAW (fomaw.org.) are equally important to support operations. Monthly sponsorships of spay/neuter activities are encouraged and help to ensure a more stable flow of funding for their operations. 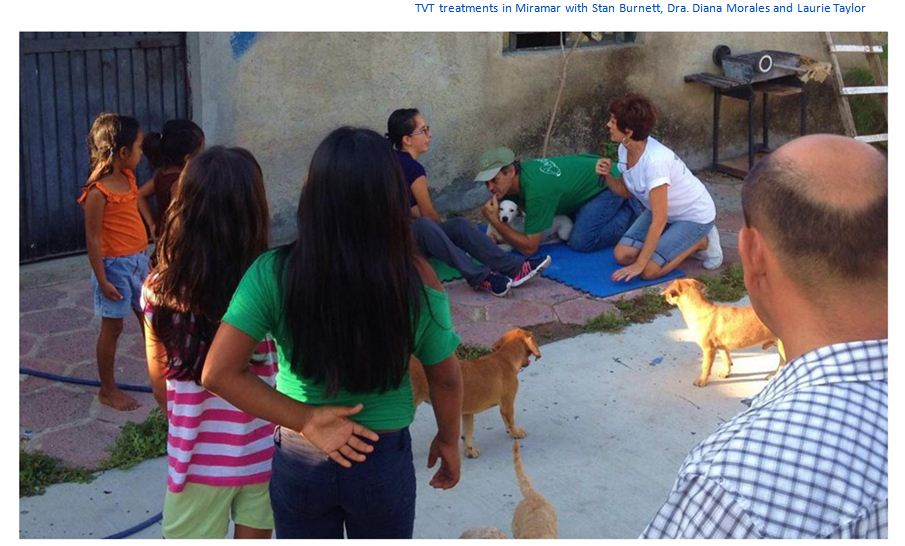 The photos shared here speak a thousand words and there are many more stories yet to unfold. Friends of Mexican Animal Welfare is dedicated to continuing the work of making life in Manzanillo better for thousands of animals and the communities in which they live.