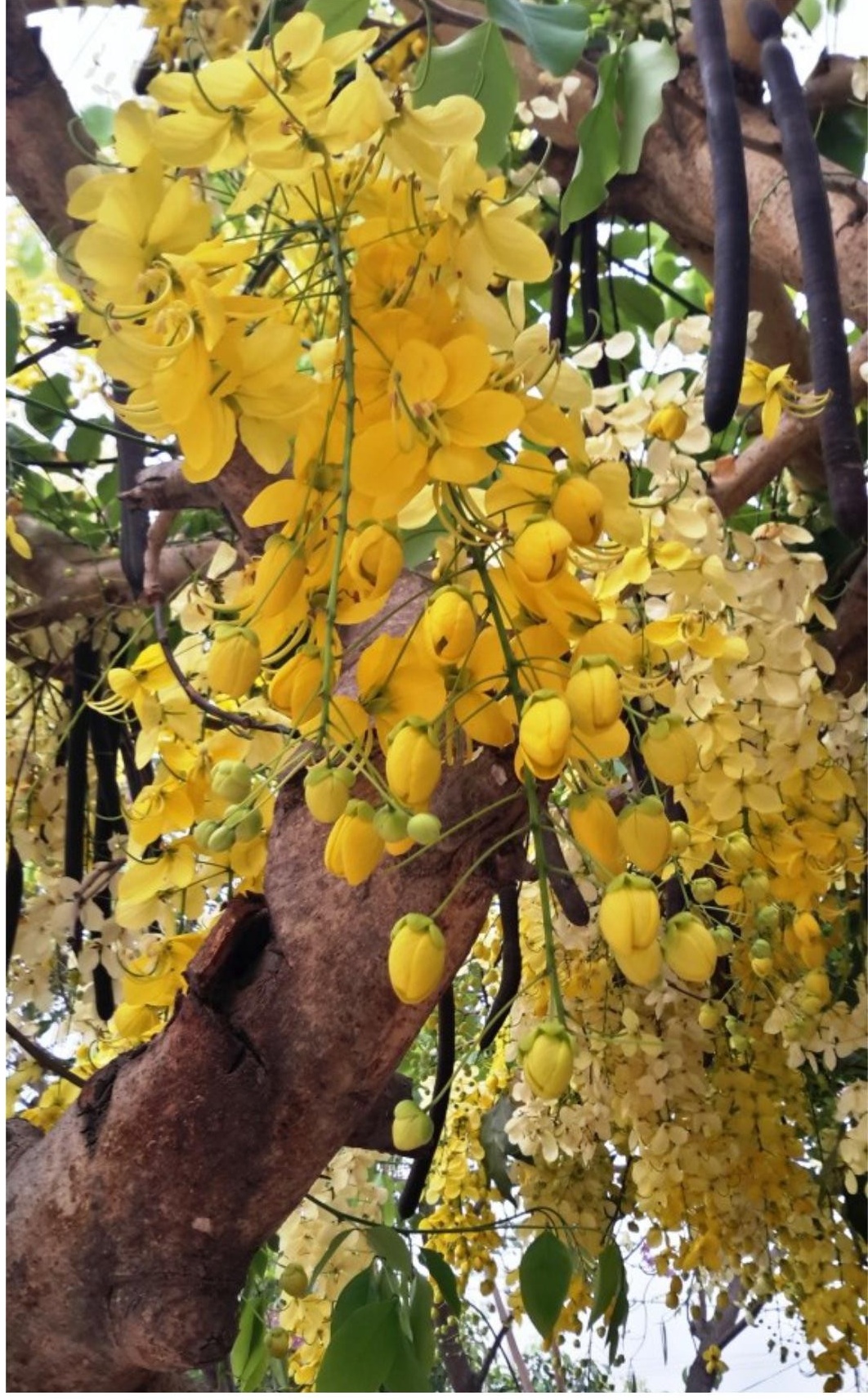 By Tommy Clarkson  from the July 2018 Edition

The genus Cassia includes more than 500 species of herbs, shrubs and trees that are native to the world’s tropical areas but include some of its most spectacular flowering plants. However, discrepancies abound in reference materials with some “botanists” placing many of the species into a genus called Senna while many others consider that an invalid name. Now, add to that the fact that many of the individual species freely hybridize and . . . well, one may encounter no little confusion in identifying specific individuals in this family.

Aware of this, it was been with trepidation that I endeavored to write about this magnificent tree with its long, drooping sprays of flowers, awash on bare limbs in a mantle of glorious golden yellow.

These deciduous evergreen trees of thirty to fifty feet (9.14-15.24 meters) in height, and a spread of twenty to forty feet (6.10-12.19 meters), with their stunning, pendant, flower clusters each flower comprised of five petals are native to India. But, they also well proliferate here on the Central Pacific coast of Mexico. How and when did they get here? Simply, I can find little more than comments such as that they are now “widely cultivated and naturalized in the tropics including West Indies and continental tropical America.” Suffice it to say that they are here and we are all that much more the better for it!

Drought tolerant, they like full sun and as a most handsome ornamental tree that flowers from spring to early fall, attracting bees, butterflies and small birds are often found in yards/ gardens as a shade tree or along streets. But, be aware that the branches are brittle. It is grown best in well-draining soil. During the second half of the growing season, it can be susceptible to mildew or leaf spot. And, be not alarmed when the leaves fall from the tree while it is in its prodigious blooming mode.

The leaves can grow to two feet (61 cm) long with eight to six-teen large (eight inches (20 cm) in length ovate, glossy leaflets that closely resemble the leaves of a Ficus benjamina. Those stunning flowers display themselves in long drooping terminal racemes (clusters) with the individual flower stalks being one to two and a half inches long. Its fruit pods which turn from darkgreen to black when mature – are pendulous, cylindrical, brown and septate (meaning divided by a septum). They’re 10 to 36 inches (25.40-91.44) long, one-half to just over one inch (1.27-2.54 cm) in diameter and have 25-100 lenticular (shaped like a biconvex lens), lustrous, light brown seeds found in a sticky brown pulp.

While used as firewood, its reddish wood is hard, heavy, strong and durable and well suited in cabinetry for inlay work or use as posts or in the making of wheels or mortars. The bark is used in tanning.

It is Thailand’s national tree, as well as the country’s national flower. It is also the state flower of Kerala in India. That noted,be aware that a couple of small “downsides” to this tree are that the seed pods can become a litter problem and it has an unpleasant odor.

Lastly and many will consider the following information as more than you needed to know  it is a veritable cornucopia for folk remedies. In fact, In Ayurvedic medicine, the Golden Shower tree is known aragvadha, which means the ‘disease killer’. (Deep breath, here we go!) It is used in the treatment of “tumors of the abdomen, glands, liver, stomach, and throat as well as cancer. It is employed as an astringent, laxative, purgative, and vermifuge as well as is used to treat burns, constipation, convulsions, delirium, diarrhea, dysuria, epilepsy, hematuria and pimples.

The seed is recognized as antibilious, carminative and a laxative; the root for adenopathy, burning sensations, leprosy, skin diseases, syphilis, and tubercular glands; the leaves for erysipelas, malaria, rheumatism, and ulcers; the buds for biliousness, constipation, fever, leprosy, and skin disease; the fruit for abdominal pain, constipation, fever, heart disease, and leprosy;the flowers for a purgative, use as an anti-inflammatory, antipyretic, abortifacient, demulcent, purgative, as well as being good for chest complaints, eye ailments, flu, heart and liver ailments, and rheumatism”. . . .and a significant deal more, which time and space “thankfully” (I believe I heard you mutter) precludes inclusion!