By Tommy Clarkson from the August 2018 Edition

For some, the scent some say, intoxicating fragrance of this beauty, is the very essence of all that consists “the smell of the tropics!”

The, reasonably large-sized, genus of Gardenia consists of somewhere around two hundred and fifty species of Asian and African, tropical and sub-tropical, trees and shrubs. For those already familiar with the Gardenia, Robert Lee Riffle’s comment in his book, The Tropical Look, is somewhat a mere statement of the obvious, “Some of the most beautiful plants in the world are included here. Rare is it that a group like this has so many representatives that are beautiful both in leaf and flower.”

The Gardenia jasminoides is an evergreen, dark-leaved, medium sized shrub five to six feet (1.52-1.83 meters), both tall and wide with strongly scented, broadly funnel-shaped flowers. It originated in eastern China, Taiwan and the southern Japanese islands and is, quite probably, the most widely planted species of this genus with good reason!

It has long, glossy, dark-green elliptic leaves of three to five inches (7.52-12.70 cm). With its usually double pure white, two to three inches (5.08-7.62 cm) in diameter, flowers, it is a great addition to one’s outdoor plants. In temperate climates, they are often used as houseplants.

These beauties require full sun more filtered if in the hotter environs. To grow its best, it likes sandy, yet fertile, humus-rich, well-draining soil. It, most definitely, needs to be watered regularly and does not like its roots disturbed. The Missouri Botanical Garden advises, “Place [them] in light to moderate shade, preferably with minimum competition from tree roots [as] Gardenias resent root disturbance. Use fertilizer [with] iron com-pounds. Add plenty of organic matter, such as compost or ground bark to as large an area as possible. Mulch plants in-stead of cultivating . . . Prune shrubs after they have finished flowering to remove straggly branches and faded flowers.”

Ellen Zachos, in her book Tempting Tropicals, states, the Gardenias have “a reputation for bud blast, which is usually the result of inadequate light and humidity. Make sure your plant gets enough of both, as well as nighttime temperatures of approximately 70° F (24° C).” That temperature issue is probably the foremost key to attaining successful Gardenia blooming!

Beyond that, keep a watchful eye out, as they are sometimes plagued by mealy bugs, aphids, nematodes, spider mites, scale, white flies and other pesky insects. Should you notice the black leaf tips or loss of buds, these are usually due to changes in temperature or incorrect amounts of water.

Now, all those warnings about temperature and sunlight aside, I noted the following post, from Plantladylin, on the National Gardening Association’s Plants Database site. “Gardenia jasminoides is a common and popular shrub here in the south, and the fragrant blooms are a favorite of many. I have two Gardenia shrubs in my yard that I planted 30+ years ago.

They’ve been pretty much neglected when it comes to fertilization and pruning, as I rarely do either, and they are both about six feet high and wide. I’ve read that Gardenia requires a location of mostly shade with dappled sunlight, yet one of mine grows in full sun, the other in full shade, and they both thrive, blooming during May and June each year.” So, that having been noted, take all of my earlier advice and counsel for simply that!

Its uses are many: placed as a background, incorporated as a hedge, used as a foundation plant, and if cut, are wonderful in floral arrangements or leis. As to cultivars and variant species, suffice it to say that there are several that are larger bloomed, have bigger leaves and/or which are single flower forms.

Interestingly, the Gardenia has medicinal applications, with the entirety of the plant being antispasmodic, antiperiodic, cathartic, anthelmintic and external-antiseptic. And now, for all my trivia buffs and trainees for Jeopardy, this plant’s Genus name honors the Scottish physician, botanist and zoologist, Alexander Garden, who lived from 1730 to 1791 and settled in Charleston, South Carolina in 1752.

Let’s wrap this up with something else the earlier-mentioned Ms. Zachos said, “Nothing beats the fragrance of a fresh gardenia flower. It’s a complex scent and a beautiful flower with heavy, silky, creamy petals. This is a lush, sensuous plant when in bloom, and even without flowers the highly glossy foliage is very attractive.” (Interestingly, however, ours has little smell.) 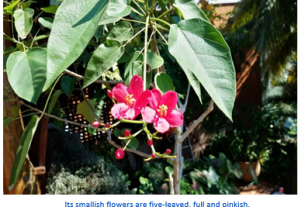