By Terry Sovil from the November 2017 Edition

Manzanillo has some incredibly interesting, and different, creatures that are all around us. As a diver, I see all kinds of in-credible things regularly. I don’t take them for granted. When I’m diving, everything around me is my friend because most everything is alive! Here are 4 examples:

Christmas Tree Worms
The Christmas tree worm is a Christmas tree-shaped, tube-dwelling worm with magnificent twin spirals of plumes used for feeding and respiration. The colorful plumes, or tentacles, are used for passive feeding on suspended food particles and plankton in the water. The plumes are also used for respiration. Though the plumes are visible, most of the worm is anchored in its burrow that it bores into live coral. Christmas tree worms are very sensitive to disturbances and will rapidly retract into the burrow at the slightest touch or passing shadow. They typically re-emerge a minute later, very slowly, to test the water before fully extending their plumes. About 1” / 25mm in size. 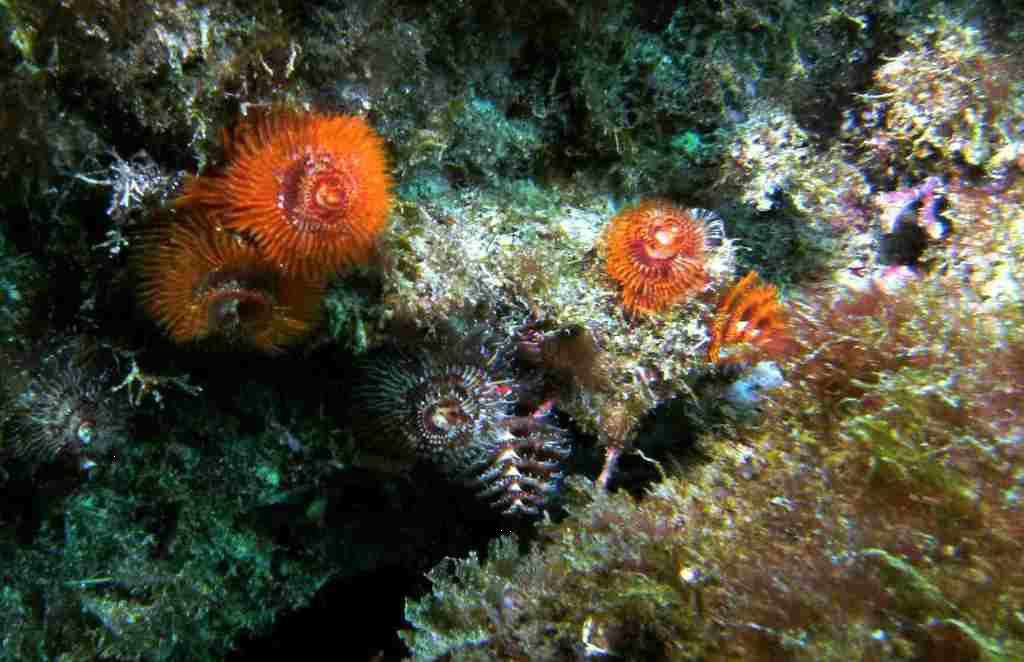 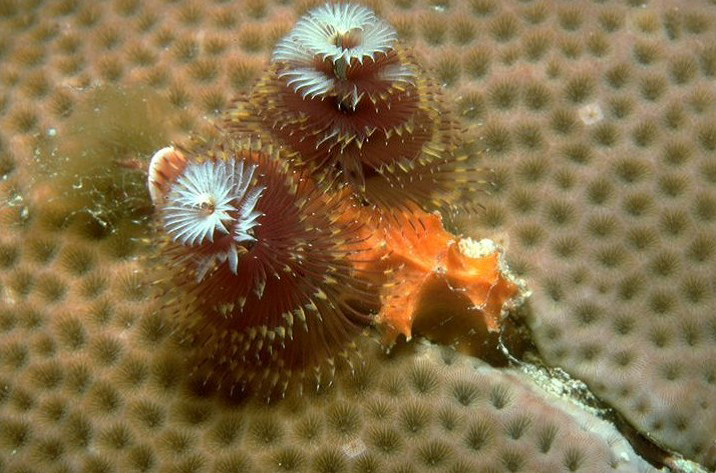 Tube Blennies
There are many in this family, over 22 different types with 19 here in Manzanillo. They are found in depths of 3-200′ .9 – 61M. They are solitary fish mostly, common in shallow rocky areas where they live in mollusk tubes (worm tubes that have been abandoned). They extend their heads from their holes. They will sometimes dart out to grab food. They tend to ignore divers and will allow a close approach. They grow from 1 ½ – 2″ / 3.8 – 5 cm with a maximum of 2 ½” / 6.3 cm. Their eyes make me smile every time I see them. 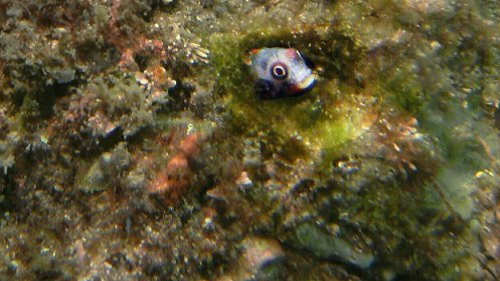 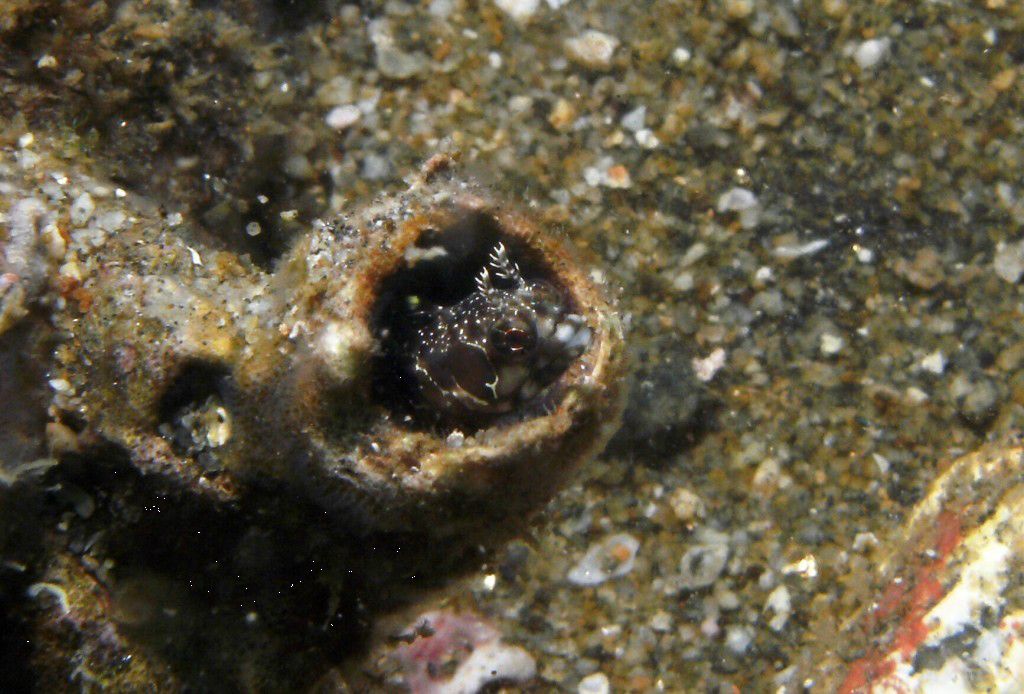 Sea Cucumbers
The one I find most fascinating is the Orange Sea Cucumber (Cucumaria miniata or Vermillion cucumber). We also have a black type that is common here. There are six types common to the Eastern Pacific Manzanillo area. This one has multi-branched tentacles with the color usually orange but can range from white to almost red. They live on rocky reefs in crevices to a depth of about 80 feet / 24.4 M. They do not move about like some of the larger sea cucumbers. Rather than moving and finding food, they use their tentacles much like the Christmas Tree Worm. Once their tentacle is covered with food, they put it into their mouth where the food is removed. They can grow up to 25cm or 9” in length! If you move your hand back and forth, and create a current, the tentacles will be pulled back in-side the cucumber! 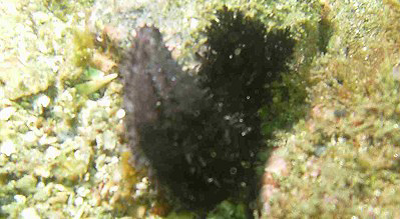 Tiger Snake Eel
These are the most common eel seen in Manzanillo along with the Jeweled Moray. Many people that see them identify them as a snake but they are, in fact, a very harmless eel. They do not have teeth like Moray eels, but have grinding plates. They are wary of divers but you can get pretty close to them to ob-serve their habits. The most fascinating part is that, if they are truly afraid, they can bury themselves totally in the sand. Usually going tail first, they can wiggle and back right into the sand and move beneath the surface of the sand! They are found in the Gulf of California and southern Pacific Coast of Baja to Panama. They inhabit sand flats and rocky areas with boulders and gravel rubble. Average size is 28” / 50 cm but most are a bit smaller than that. 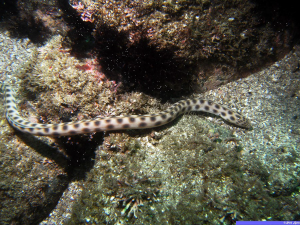 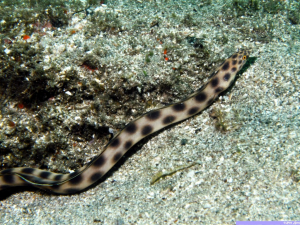 Video on YouTube
There is a video on our YouTube page that shows all of these critters in real life. It starts with the Christmas Tree Worms, where you can see how skittish they are and they will quickly retract and then very slowly come back out again. Next are the tube blennies, another favorite of mine. I get really excited to these little buddies and I will always stop to say “hello” and watch them. Next is the sea cucumber, Orange Sea Cucumber. At 1:41 in the video you will get a very good look at his mouth. There was a current the day we shot this video and so the tentacles are moving around a lot. But if you watch that mouth you will see tentacles moving in and out! Check out the screen-shot from the video, I put a colored arrow pointing to the mouth.