By Kirby Vickery  from the August 2018 Edition

I have given the readers of the Manzanillo Sun over four years of Aztec Mythology and have been thinking that it might possibly be an interesting endeavor to branch, not only into their real lifestyle, but that of the Mexican peoples, from as far back as I can go to the present.

Right now, depending on which internet site you go to, the his-tory of Mesoamerica starts around 8,000 BC. However, while reading about the Ute and early American Southwest Indians, I understand that the land bridge crossing date of the first of four pushes is being pushed back an additional 8,000 years.

When we get to Clovis, New Mexico, in a few days, my intent is to ask an anthropologist what the latest is on that score, provided I can find one. Until that happens, I should tell you that there is gathering evidence that some of the Mesoamerican peoples arrived by means other than that popular land bridge around where Alaska sits today. Personally, I have a tendency to believe it, if for no other reason than the variations in the age of all the bones they keep finding from Tierra del Fuego to the Yukon. I should note that modern DNA testing and dating isn’t that old, so we shall see what we shall see.

Currently, the society of the Clovis Indians in America’s Southwest predates that 8,000 BC mark for Mexico and Central America by approximately another 8,000 years. They were supposedly the first peoples to cross that land bridge. The other problem I’ve run into is that there are is an anthropology site in Brazil which is pulling up remains sixteen to twenty thousand years older than the Clovis.

While not to be outdone, some of the newer sites in the United States and in Chile also have remains which predate the Clovis, as do some of the findings of early peoples throughout the Pacific which modern day explorers (Thor Heyerdahl and Phil Buck) are trying to show that the Pacific Rim, to include Australia, could have been populated from the Pacific’s east rather than the northwest.

I don’t want to get to far from the crux of my topic, however. I intend to stay on our own shores and leave the timing problem with people of more pointed education, drive and sunburnt necks.

Before the Aztecs in Mexico, there were the Toltecs. Before them the first group of people to build any kind of a society was the Olmecs. They flourished between 1200 BCE and started their decline around 400 BCE, to end a hundred years later. The Olmec legacy was their stone work of which their extremely large stone heads have become a focal point. They were also proficient in carving just about any stone or rock they could lay their hands on. To this end, there is a faction of people from Africa that claim this entire Mesoamerican area based on the facial features of these giant, carved heads.

Their first capital was in what is now San Lorenzo, Tenochtitlán which was destroyed and their monuments defaced in 900 BCE. They moved their capital to what is now La Venta, until 300 BCE, and it was all downhill for them after that.

They were basically an agrarian society, cultivating the ever present maize (corn), and other staples in the form of gourds, to include various squashes, beans and various tropical fruit. You would not recognize their corn. It had kernels about the size of present day natural oats. But the Olmecs were the first people to start cross pollination processes to make it larger, and to some extent they were successful. For protein, they ate fish, possum, armadillo, snakes, birds to include turkey and dogs raised as food. The gathering and processing of cocoa was probably, and still is, one of the most important parts of their society. Hunting prey probably was not considered a profitable vocation, but farming was, as the Central American jungle didn’t have any large animals bigger than the jaguar.

Some of today’s historical sites tell us that the Olmecs had a written language. Others tell us that they didn’t really. We have been able to decipher their numbering system, which was created to support their trading efforts, especially with the Mayans and other tribes scattered. Their religion and style of life set the tone for the rest of the Mesoamerican peoples who fol-lowed through time and area. This also includes their timekeep-ing (you know the large circular calendars.) Probably their best attribute was working in stone as a lot of their jewelry is still coveted today for its appeal and craftmanship.

Where they came from, and just how their culture came to be, is a mystery. The most common belief is that it was self-generated by the people that lived in the area. Because the soil was rich, and weather was good, the land was able to sustain a Maya civilization growing number of people. As a result, as with any society, it segmented into classes. There were the farmers or tradesmen, the soldiers or military, and the priesthood. This was to be copied by the Toltecs and later by the Aztecs to the ‘nth’ degree. 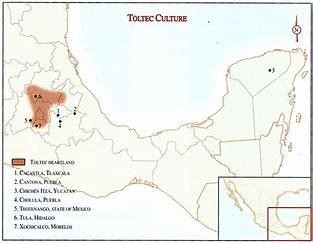 The next “Civilizations” to rise were the Toltecs and the Maya. The Toltecs formed their power reign from 900 thru 1000 CE. Their area of control was a lot smaller than the Maya, who started their civilization around 1800 BCE through 300 BCE. From there, the Mayan had their Classic period from 250 BCE to about 900 CE but stuck around until the 1500’s. What can be gleaned from all this is that the Maya were around during the rise of the Olmecs but didn’t really start on their own civilization until much later. 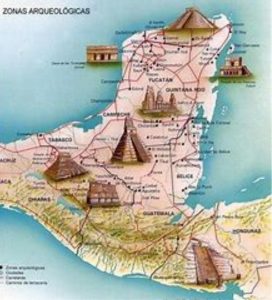 Where the Toltec empire was just replaced by the upstart Aztecs, the downfall of the Mayan civilization is still a bit of a mystery. There are several theories ranging from climate change to a change in temperament and friendship between
them and the Olmecs who shared the same timeline. In neither case were they over overrun. But, no one has been able to come up with a good reason for their civilization to have fallen apart.

All this is good stuff if you’re a history buff, but, what I needed to tell you is how these people lived. Because the first of the civilizations in the region of Mexico and Central America were the Olmecs, I started with them.