By Tommy Clarkson from the January 2016 Edition 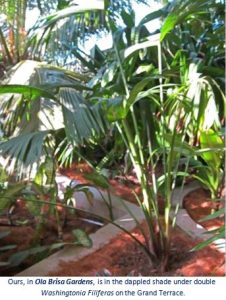 Palm Let’s clear up a couple of relatively major, incorrect, facts from the outset. Firstly, this plant is not a palm tree. Secondly, the hats for which this plant is so well known are made by natives in Ecuador, not Panama.

Now, as that first point, while the Carludovica palmata is a palm-like plant, reaching five to eight feet (1.5 -2.5 meters) it is, as we folks from the rural Midwest might say, merely some sort of “shirt tail kin” to both the Palmae (Arecaceae) and Pandanus families. Beyond that, these members of the monocot Cyclanthaceae clan, are a rather diverse family comprised of eleven, markedly different, genera which consist of herbs, shrubs, and epiphytic lianas (woody, climbing vines). These flowering, perennial, stemless plants proliferate throughout Central America and tropical South America. 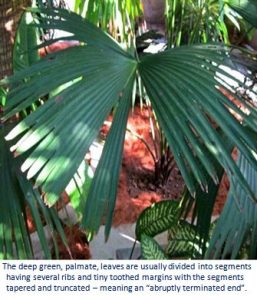 The Panama Hat Palm itself grows from southeastern Mexico to Bolivia with large, fan-shaped leaves. If grown from a seed the first useable leaves can be harvested after about seven years. However, if suckers are employed this speeds up the process and leaves can be harvested after only about eighteen months. At that point, there will be around twenty to thirty leaves.

A common feature of plants in this family is the watery or milky sap found in all of their plant tissues. The petioles are sheathing at the base of those deeply lobed, palm-like leaves with the flowers being unisexual (both male and female flowers on the same plant)

The inflorescences (groups of flowers attached to a common axis) are arranged quite densely on axillary spadixes (fleshy spikes of tiny flowers) that usually have two or more deciduous spathes (bract). Now, before moving on to those classy head covers, I relay that though I have not yet personally so tried and, accordingly, do not recommend it  the young leaves and shoot tips of this plant can, supposedly, be eaten raw or incorporated into salads and is said to taste like asparagus. 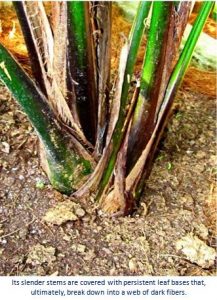 these famous hats are made. (A bit of trivia: It takes six young leaves to make one hat.) Yet another region of Ecuador where these hats are woven is Montecristi with them referred to as Montecristi-Panama hats. In point of fact, these are said to be some of the finest “Panama” hats made anywhere! The hats from this region can take up to six months to weave and I have read where they have been known to sell for thousands of U.S. dollars!

Since 1630, when record keeping regarding hat- making was initiated, the economic importance of Panama hats has been acknowledged as substantial, with Ecuador alone exporting one million hats annually. For a genuine one, the entire hat-making process with only a few finishing operations at the exporters’ plants is accomplished by hand. This includes the planting, harvesting of leaves and preparing them for weaving. Following leaf collection, they are divided into strips, boiled in water, bleached with lemon juice and then dried. The dried strips are then handwoven into the hats.

As one of my sources observed, “Despite the confusion over the origin of its name, the Panama hat has transcended the fickle fashion world for several centuries.”

The older leaves of the Panama Hat Palm are also economically important as they can be utilized in the making of cigar cases, small bags, mats and baskets. Other species of Carludovica provide the raw material for both commercial and indigenous products. For example, the leaves of Carludovica angustifolia are used for thatching huts in Peru and those of Carludovica sarmentosa are used to make brooms in Guyana.

Many are the explanations given regarding the “Panama hat” name origin. Some claim it’s because it was exported to North America from Panama. Others say that prospectors bought the hats in Panama on their way back from the California Gold Rush. Yet others attribute the name to Panama Canal construction workers who wore the hats to protect themselves from the tropical sun.