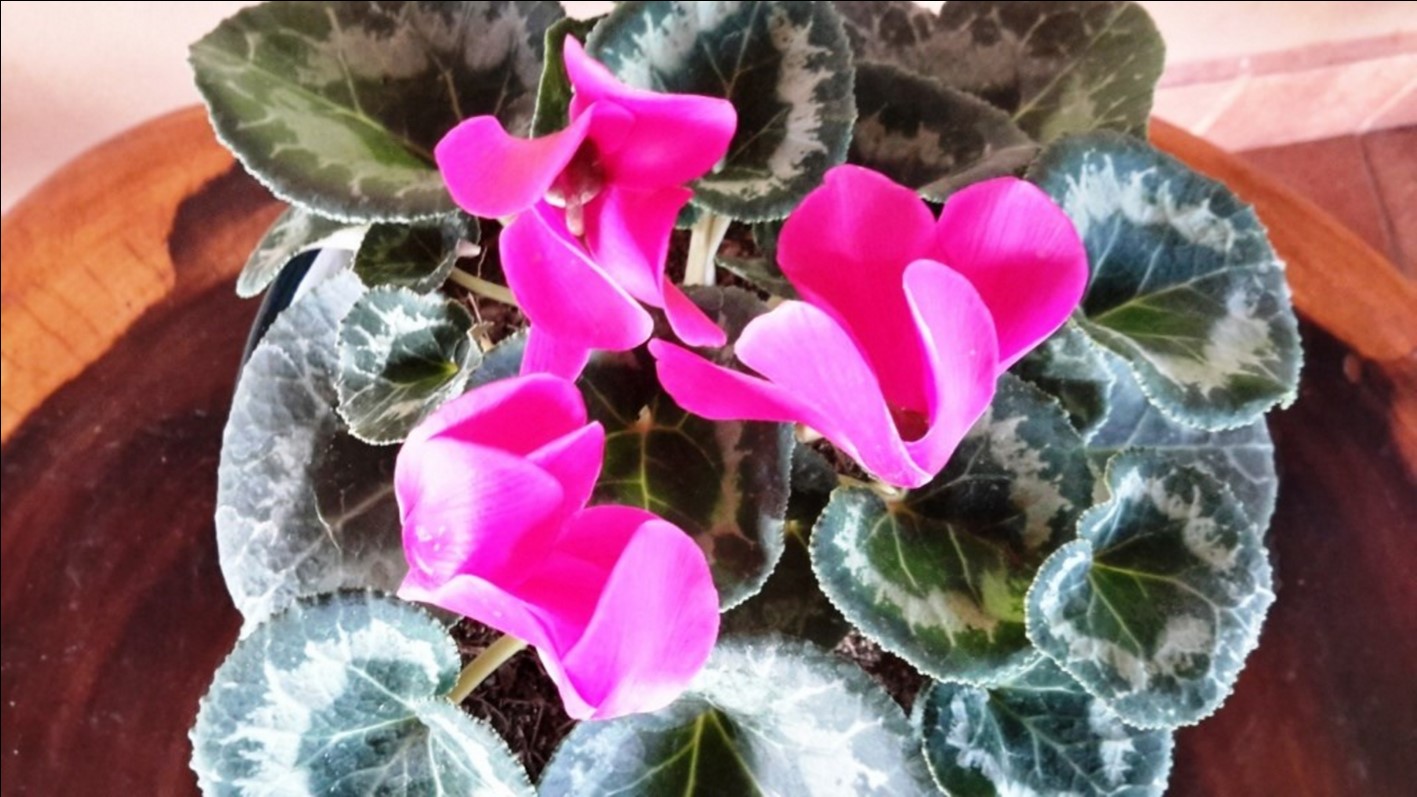 By Tommy Clarkson the April 2019 Edition

(Steven, our close pal who, for a number of years, owned and operated a couple of funeral homes outside of Kansas City, shared that, as a result of their lovely flowers and delightful leaves no few times he has seen Cyclamen species given to families as part of a floral display. He said that, in no few cases, he had seen them later placed on a dining room table, or similar location and noted that they successfully bloomed constantly for up to two or three years!)

After finding my specimen at a local vivero (plant nursery), I set about endeavoring to learn more about them. This was more difficult than first imagined as, beyond learning that this is a genus of some twenty-three species, few of my several score, botanical books even acknowledged their existence! However, I was able to confirm that they originated in Georgia (the country -not US state -where Stalin was born)! There they “. . . generally grow in humus-rich pockets of soil in limestone rocks on the sides of wooded river gorges, but (are) also found in similar pockets in the degraded sub-alpine area of the river catchment.” 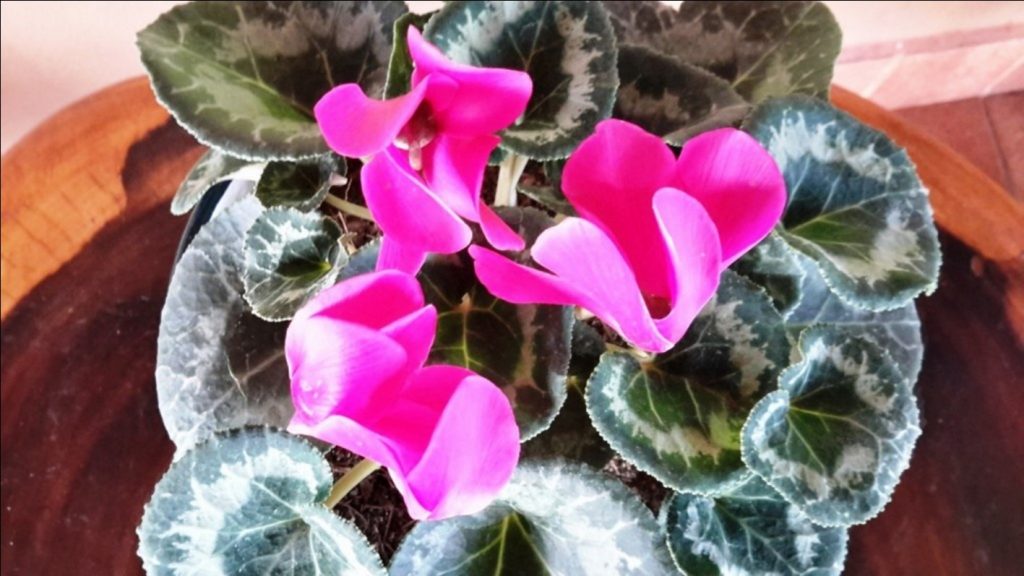 However, you need not travel that far to obtain one as, increasingly, nurseries appear to be finding them favorites of gardeners. If given to you as a present or you find it gussied up in that manner for marketing purposes -ensure that you immediately remove any decorative foil that might have been placed around the pot so that any excess water trapped in the soil can drain from those overly zealous, but well-intended folks.

And, speaking of its H2O requirements, while they are blooming, try to keep the root ball moist, while feeding it a general purpose fertilizer every two weeks. But do the former by watering in a tray, below the pot, and allowing the roots to enjoy the water from below, rather than watering from the top of the soil, as this can lead to rotting. Stop watering your Cyclamen colchicumonce you note that the leaves are dying.

Scent-wise, I’ve seen it written where that “they smell like a fine perfume.” But I’ve also read that “even the florist variety has an unpleasant rubbery odor (however) the wild type cyclamens have a beautiful, delicate fragrance that is partially captured in the aroma chemical, cyclamen aldehyde.” Mine, sitting in indirect sun underneath the Dining Palapa have a unique, subtle, fresh scent. 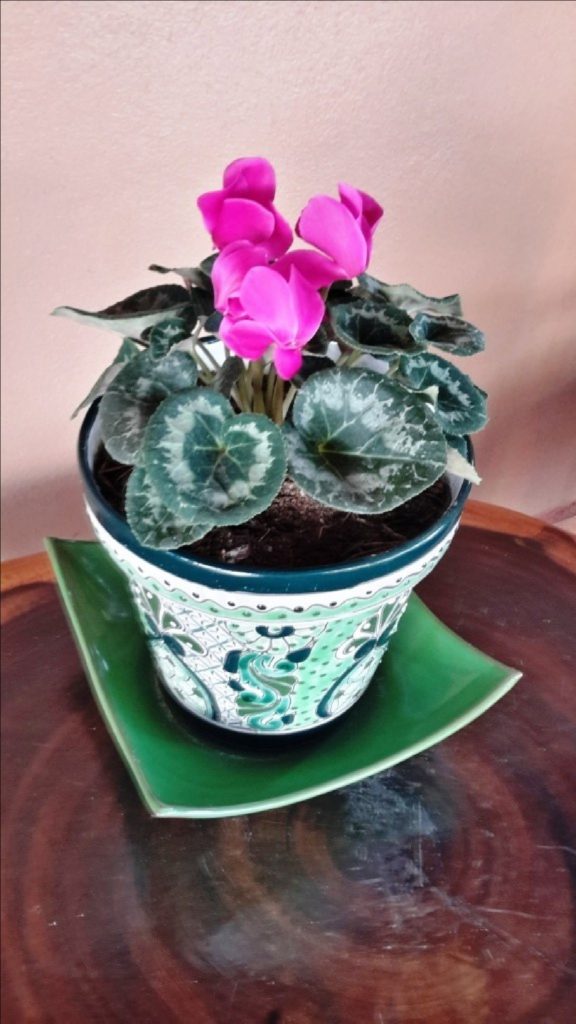 “But, Tommy, what if I don’t live in your paradisiacal environs?” Well, I’m glad you asked! As a tuberous perennial, in the warm-er climes of zones six through nine, it can be planted outside, where it will reappear every year.

So, on a day to day basis, proper Cyclamen care starts with the correct temperature. Remember, in nature, this genus began in cool, humid environments. If the temperature is over 68 F. (20 C.) during the day, and 50 F. (10 C.) at night, your plant may start to slowly die. Temperatures that are too high will cause the plant to begin to yellow, and the flowers will fade rapidly.

In turn, know that your Cyclamen colchicum will thrive in bright, filtered light, but direct summer sunlight is too harsh and drying for them. (Remember its origins mentioned earlier!) Furthermore, in order to extend the flowering -and attractive their blossoms are of your Cyclamen, you should deadhead (remove) old blooms and leaves regularly and inspect the foliage for any faded, yellowing leaves or signs of disease. To correctly remove these fading flowers and foliage, I suggest that you carefully follow the stem all the way down to the soil be-fore plucking.

Want more specimens? That’s not difficult. Cyclamen plant separation should bed one when temperatures begin toget lowerin autumn. Division is rather simple. With a clean, sharp knife, cut apart the bulb, ensuring that each piece cut has a nub from whence the foliage can grow.

All Cyclamen are toxic to those of the canine and feline sort and, if ingested, this plant can cause induce increased salivation, vomiting and diarrhea in whatever decided to munch up-on it! 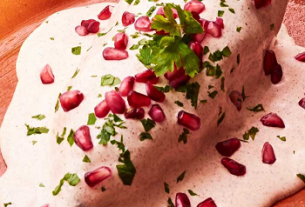