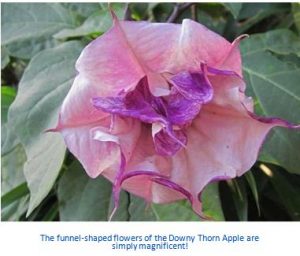 The Datura genus comprised of both annual and perennial herbs and shrubs – has between eight to ten varieties that are all called by some Devil’s Trumpets. While most of them originate in tropical America, this five-foot (1.5 meters) tall species is an Asian native from southern China.

An evergreen in the sub-tropics, in temperate zones these plants can be grown as annuals. A tenacious survivor, I moved and then virtually forgot about a couple of specimens below our compost bin across the street. Recently, while building a pathway to several new terraces in that area, Juan pointed out that not only were they blooming and doing well, but, lo and behold, below them all up and down the hill were a score or more volunteer plants that had sprung up from the green, somewhat round shaped, 1 1/4 – 1 5/8 inch (three to four cm), short, blunt spine covered, seed pods that had dropped off, rolled down, sprouted and taken root!

(We’ve since transplanted six to be with several other wonderful tropical flowers that grow on and around our pergola. And I’ve since learned that they can also be propagated by cut- tings.) 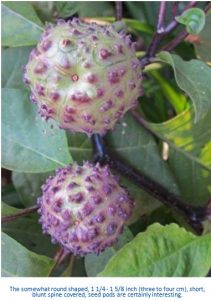 A year round albeit intermittent bloomer, the funnel-shaped flowers of the Downy Thorn Apple are simply magnificent with, perhaps, the most attractive of all being the double-flowered ones. These flora are hermaphrodite (having both male and female organs) and are pollinated by insects.

Their stunning, solitary, eight to ten inch long (20 – 20.5 cm) blooms are somewhat difficult to describe, but I’ll try. They ascend, with five, fused petal, fluted lobes, that have somewhat spurred edges with white to eggplant purple coloration outside and white inside. . . . probably, it’s better if you simply look at the pictures!

Oh! One other interesting aspect of these flowers is that they are pollinated at night by sphinx moths.

However, like no few beautiful flowering plants, all parts of this one are toxic. In fact, the Datura fastuosa contains the alkaloids hyoscyamine, hyoscine and atropine as well as scopolamine  and other chemicals some that can be used medicinally while others are patently, “not good for you”, hallucinogenic drugs.

That having been said, the internet site “Plants for a Future” states that, “ It has a wide range of applications in India, including in the treatment of epilepsy, hysteria, insanity, heart dis- eases, fever with catarrh, diarrhea, (and) skin diseases. A poultice of the crushed leaves (can be) used to relieve pain. In China, the plant is used in the treatment of asthma. In Vietnam, the dried flowers and leaves are cut into small chips and used in anti-asthmatic cigarettes.”

Elsewhere I’ve read that “Cigarettes made (from) the leaves are also used to treat Parkinson’s disease. Widespread is also the use of different plant parts in various preparations for sedating patients with mental disorders. In Africa, other traditional uses of the leaves include the treatment of hemorrhoids, boils, sores, skin diseases, rheumatism, headache, toothache, cholera, para- sites such as ringworm and guinea worm, and as an abortifacient and anesthetic. In Senegal, Guinea, Ghana and Nigeria crushed leaves are applied as poultices on inflammatory swellings and rheumatic joints. In Ghana, a decoction of the leaves is used as eye drops to cure conjunctivitis and other eye com- plaints. In Nigeria dried leaves are mixed with salt and pepper and burnt to treat asthma. In Ethiopia the seed oil is used for massaging painful body parts. In Asia Datura metel has similar medicinal applications, and it is used additionally to treat hydrophobia, epilepsy, convulsions, syphilis, inflammation of the breasts, smallpox, mumps and leprosy.”

By contrast to its spectacular flowers, the leaves of the Downy Thorn Apple are somewhat pedestrian. They 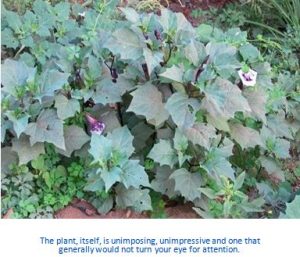 are obvate, three to ten inches (7 – 25 cm) long with toothed margins.  One source says that, along with the seeds, these leaves are “anaesthetic, anodyne, antiasthmatic, antispasmodic, antitussive, bronchodilator, hallucinogenic, hypnotic and mydriatic.” Now, all things considered, this – and the preceding two paragraphs should, most certainly, get your attention!

While “the pros” state that they prefer well-drained soil in partially shaded areas – not grow in full shade – my first trans- planted two were in almost complete shade nearly the entire day and the “volunteers”, conversely, seemed to thrive in bright sunshine without ever being watered!

All this from a forgotten-about plant! 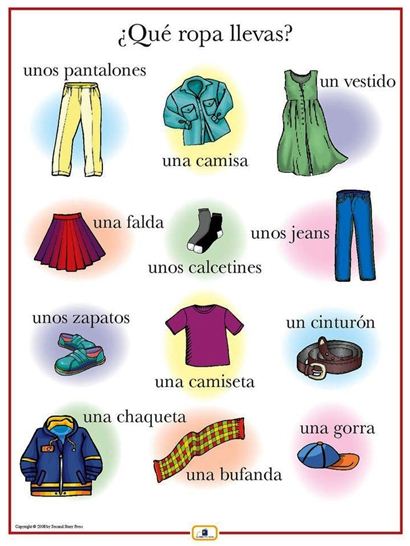