By Tommy Clarkson from the May 2017 Edition 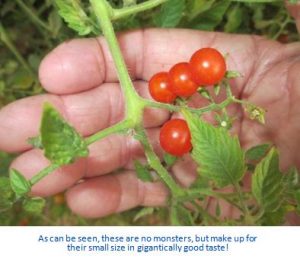 Yes, these Cherry tomatoes are, indeed, an important part of  the Ola Brisa Gardens plant family. Why you ask? Well, firstly and quite simply, I love to pick and eat fresh tomatoes right off the vine!

(It’s a delightful vice that I first learned from my cousins Jeanette, Dick and Cindy back on their parents’ farm in Western Kansas. During those early Eisenhower Whitehouse years, we’d grab a salt shaker and race into their mother’s large garden to munch on vegetables that we’d pull up from the dirt or pick right from the bush or vine. Among them, wonderfully sour rhubarb stalks, crisp, crunchy carrots, fresh lettuce, tangy radishes, and yes, lots and lots of tomatoes!) 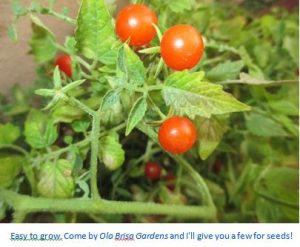 The second reason for their inclusion along with the several other hundred tropical palms, plants and flowers in our gardens is that these hardy little guys are native to and grow wild here in Mexico! In fact, their ancestors were savored by the Aztecs and whatever was good enough for Montezuma is durned straight good enough for me!

Those that vigorously grow next to our infinity pool and on which I stop and chomp during my daily pool exercises – did not come from any store bought seeds. No way José! (Conveniently, that’s also our gardener’s name.) These are   the real things!

In fact, I first found these tiny and I mean small, little, itty  bitty cherry tomatoes growing wild in the Sierra Madre Occidental Mountains in the southern part of the State of Jalisco during one of José’s and my botanical treks into the “interior’!

About the size of my little finger tip, there they were growing  in a clustered clump, right next to some large 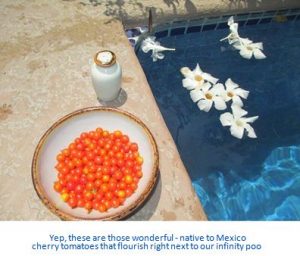 boulders about sixty meters from heavy tropical overgrowth. A few botanists contend that they originated in Peru, Ecuador and Northern Chile. (But I think that may be the tiny-fruited currant tomato Lycopersicon pimpinellifolium).

And, I just gotta’ ask, “So just how’d these, that I found, get here in the wild?” Hence, I concur with those who believe that this variety originated here in Mexico. . . . but I’ve gotta’ admit that the pictures I’ve seen of those more southerly currant tomatoes look a lot like mine what with their delightful trusses of sweet tiny fruits!

With so many cultivars now out on the market, it’s a bit con- fusing sorting out what variety stemmed from what and where. Historically, tomato seeds appear to have been taken to Europe from Mexico after Cortez wreaked his havoc on the natives in 1519. And though originally from the New World, it was  introduced to the gringo palate in the U.S. in the 18th Century.  (I’d like to think that these domesticated ones may have been distant relatives to my wild ones!)

Growing cherry tomatoes is pretty easy perhaps more so than the regular, larger ones as these guys produce copious blossoms allowing a good chance some will set fruit. But for the

best results, with prolific yields, give them what they like best lots of full sun (at least eight hours per day), fertile, well- draining soil, and evenly-applied moisture.

Cherry tomatoes often remain productive in very hot weather when the blossoms of larger-fruited varieties call it quits and drop off. As to how much water is needed depends both on  the rainfall received and the type of soil.

With fast-draining soil, one needs to water often if the weather’ s been dry. But before watering, check the soil for dryness down a bit, not just the surface. If the foliage looks limp as I often do after a full day in the gardens you’ve neglected  them too long.

Once your cherry tomato plants are established, and around a foot   tall,   I’d   encourage   mulching   them   with  compost.

Just as in familial situations, strong support is important! Plant- wise, prune the vines to two or three major branches. I prefer caging  inside  a  rounded  portion  concrete  re-enforcing wire “screen” which allows good air circulation and easy access to  the fruit. But, make sure you stake them firmly into the ground. Those wimpy inverted conical cages, sold commercially all too often, bend and may collapse under the weight of mature plants with all those yummy “maters’.

Beyond standing by the bush and simply savoring them on the spot as I do, a bit more cultured – yet simple – way to enjoy them is to roast ‘em in a pan with a little garlic, salt and pepper. Or, as a mix with chopped onion, fresh basil, fresh mozzarella, balsamic vinegar, olive oil, and a bit of salt. Now that is one heck of a great tomato salad!

(Now that I’ve fully warmed to the subject, next time we’ll dis- cuss growth of tomatoes as a whole.)