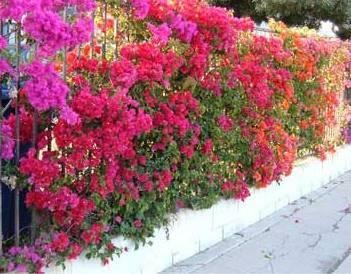 It’s said that the highlight of French Navy Admiral Louis de Bougainvillea’s 1768 odyssey was his discovery of the Brazilian flowering vine that now bears his name.

And, what a great and colorful one it is! In a rainbow of colors, it thrives from Aruba to Australia, California to Kuwait, Singapore to Switzerland (Lacarno, with its mild Mediterranean climate) Turkey to Texas and a plethora of far out points in between – as exotic as Ethiopia and Sri Lanka.

They are succinctly described by W. Arthur Whistler as “Distinguishable by the scrambling shrubby habit, shiny green leaves, nasty spines, and clusters of small white flowers, each attached to a typically magenta bract.” I believe the most commonly seen, the ‘Sanderiana” cultivar, is of what he spoke.

Taxonomically this can all get quite confusing very fast! There are numerous lovely cultivars – primarily between B. glabra and B. buttiana or B. spectabilis. All sport long arching branches, with those heart-shaped leaves, in a variety of other colors such as white, pink, red, orange, purple, crimson, burgundy and yellow.

Some cultivars are double flowered, variegated or have multiple colors produced on the same plant. But, don’t cloud the issue with the recently identified Bougainvillea arborea – the Bougainvillea Tree . . . . too late, we’re all confused now!

But let’s strive to focus on the large scandent shrub most of us recognize as “Bougainvillea”. Today’s varieties are, purportedly, the result of crossbreeding between only three out of the eighteen botanically recognized South American species. With that as a base, the total number of varieties growing around the world well exceeds 300 – all thriving in places that are hot and relatively dry

Coldly described by one botanist as a “ woody vine with stiff, curved thorns,” it can grow anywhere between 3 to 40 feet (roughly one to twelve meters). They are aggressive. With those hooked thorns they’ll climb right over the top of anything that get in its way – sorta’ reminds me of a rather ambitious woman I used to know!

Evergreen where rainfall or watering persists year around, they are otherwise deciduous. Interestingly, unlike many other plants, Bougainvillea flower best under stress. Thus, keep them slightly on the dry side and, maybe, a bit root bound.

One of the most important facts is that Bougainvillea love sun of, at the very least, five hours a day. So if planted in partial shade . . . you’ll get no flowers!

A prolific grower, its landscape applications are many – such as large topiaries, or pruned into a more formal appearing hedges or simply as a colorful focal plant. In many Hawaiian and Mexican locales they magnificently line the highways.

Its drought tolerance makes it ideal for warm weather use and its high salt tolerance lends itself as a natural for coastal applications.

Fertile, well-draining soil and frequent fertilization are pluses in its successful growth – but remember, not that much water once it is established. They respond best to a balanced, slow-release fertilizer containing nitrogen and iron. But, fertilizing too frequently can cause them to grow too vigorously.

I’ve not so noticed, but it’s said that its sap can cause a skin rash so you may want to wear long sleeves and gloves while pruning.

Around here, with high light and constant feeding, they bloom nearly year around. While some butterfly species use them as food plants, they’re relatively pest-free.

Plant your Bougainvillea near the base of the structure you wish it to climb and train it by wrapping it, ever so carefully, around that on which you want it to grow. As a container plant ensure that your pot has multiple drainage holes as these plants detest wet feet!

At Ola Brisa Gardens we have three strikingly beautiful specimens. One purplish pink, one white and another variegated leaf variety with purplish-red bracts. The first is affixed to a tall wall and below it are a large variety of caladiums in colorful, matching shades and hues. The second is in a very large stand-alone pot and looks like a massive bowl of pure white popcorn heaped high and rolling down. The latter cascades down a high wall with a backdrop of variegated ficus leaves that are nearly identical in color, shape and size.

Now one last thing – while they are beautiful, they’re also quite messy what with windblown bracts. So I encourage you not planting one next to your pool. 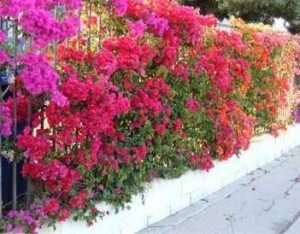 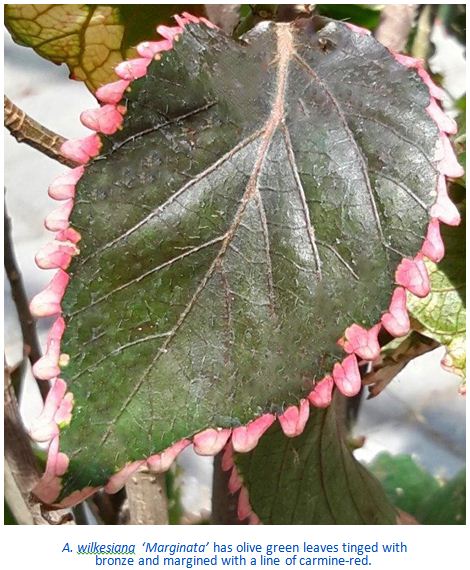 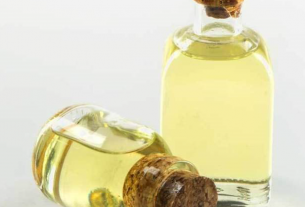