By Terry Sovil from the September 2011 Edition

The Cortez Angelfish can be found at depths from 10-100′. They are gray becoming charcoal at the rear of their body. They are found along the Baja down to Panama. They are usually solitary but frequently can be seen in pairs.

The juvenile Cortez Angelfish has six curving yellow bands from snout to tail with narrow blue bands between. In transition from juvenile to adult there is a mix as shown in the photo. The juvenile is 1-3″ in length and the transitional stage they are from 4-7″.

These fish are generally not concerned with divers and are often curious. You can approach them if you move slowly and in a non-threatening manner. They are in the family of Angelfishes. They feature a yellow body bar bordered by black bars behind the pectoral fin. Their size is 8-14″ with a maximum size of 18″
.

The Cortez Ranbow Wrasse inhabits rocky reefs and slopes most commonly between 10-40 feet. They are abundant to common in the Gulf of California and southern Pacific Coast of Baja down to Panama. They can be somewhat wary and will usually move away but can be approached by moving into their direction of travel. They are from the family of Wrasses.

Their Initial Phase has a bright yellow mid-body stripe.

In their Juvenile Phase they display a yellow with wide black lateral stripe and another on their back below their dorsal fin. They display a dark upper body and pale pinkish underside. Both sexually mature females and males cluster in large aggregations

near reef tops where they spawn in large groups by suddenly rushing upward and forming into a tight ball just before releasing white puffs of gametes. During this phase they also clean other fishes of parasites and debris

The Cortez Stingray is common in the Gulf of California and coast of Baja. They are solitary and inhabit sand, mud and rubble bottoms, often near reefs. They feed primarily on worms and crustaceans. They tend to ignore divers but will bolt when closely approached. They can be found in depths from 0′ to 100′.

They are from the family of Round Stingrays. Their features include a brownish disc covered with large black spots and light buff circular blotches. Whitish pupil cover of their eye has a three pronged shape.

Tan to brownish gray with scattering of small dark spots. Their size varies from but is commonly 16.5″ through the disk 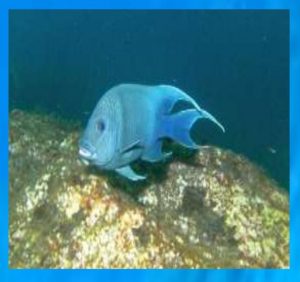 The Giant Damsel fish have a large, somewhat elongated, disk-shaped body. They are bluish gray to gray. Breeding males fore bodies are silvery gray. These fish are common in the Gulf of California and the southern Pacific coast down to Panama. They are generally solitary and inhabit boulder-strewn reefs and slopes with good water movement and algae growth. They are territorial and will attempt to chase away intruders. They are especially aggressive when guarding nests during breeding season. They can be seen most commonly in depths of 10 to 25′.

They are part of the family of Damselfishes.