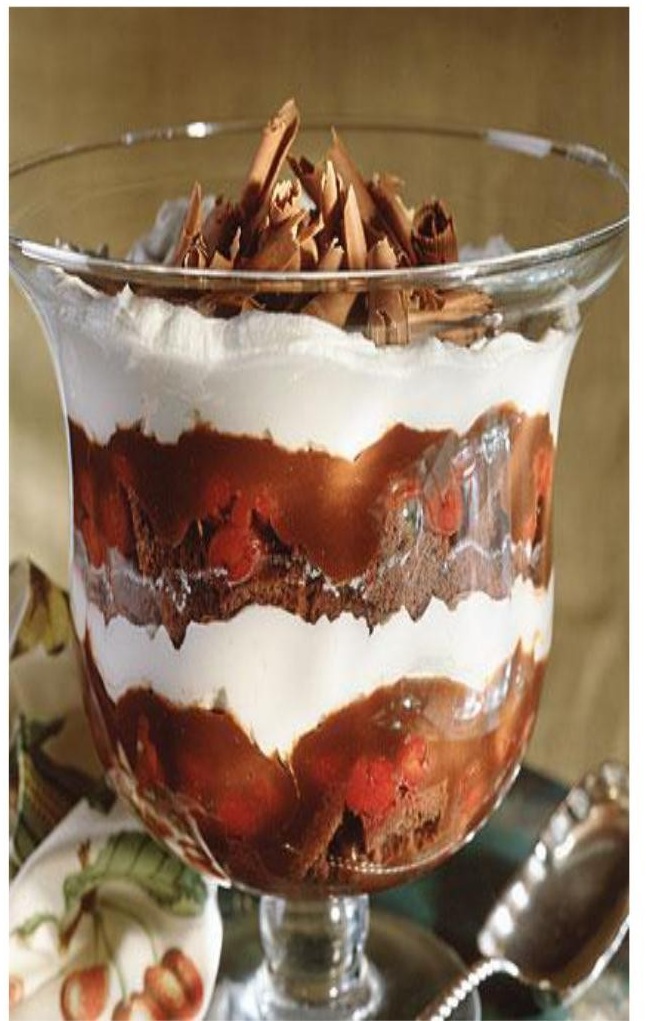 By Terry Sovil from the December 2013 Edition

I was off to an event and I needed something to bring, something that was good and tasty, but not too hard to make or assemble. Frustrated I sat down and started to browse through the recipe folder on my laptop. I found something I hadn’t made for quite awhile but recalled it was both easy to make and easy to assemble, “Black Forest Trifle”. Originating in Britain, the trifle is a dessert for Christmas and is usually made with sponge cake soaked in sherry or fruit juice and layered with various combinations of fruit, cream or custard. Of course, through the years it has been modified somewhat. But it looks like a “parfait” with layers of the ingredients.

Making the Trifle is pretty easy but I was frustrated by the fact that I have looked before for any form of pudding. There is none to be found in my area of Mexico. Not in little plastic 6-packs, not in cans, not in little Jell-O boxes to be made “instant” or boiled. So how does one make this Black Forest Trifle without chocolate pudding?

Being a confessed computer GEEK, I started to search the internet. I was pretty crestfallen to see page after page of very complex lists of ingredients and many steps in the making. One article lamented the fact that her mother used to make it but said “some things just aren’t worth it”.

Then I found a corn starch based pudding that contained 6 ingredients and was super easy to make! I did a test run and it was really very good! I could not find the exact kind of chocolate they listed but settled for a small bag of Hershey’s Chispas Chocolate Semiamargo (Hershey’s Chocolate Chips Semisweet). After making it I quickly put some Glad, Press’n Seal Self Stick Plastic Wrap (brought back from a trip to the USA) on top of the pudding to avoid the “skin” it can form.

The final Black Forest Trifle, with the home made chocolate pudding, was really pretty good. A few compliments on it so I was happy. So if you are in need of a easy to make and sort of unique little dessert, here are the two recipes needed. Make one, or both. You can’t lose!

Here are the recipes:

In four 1O ounce (295 ML) clear plastic glasses, or your finest clear coffee cups, wine glass, whisky or tumbler, layer in order: Cake chunks, Sprinkle of brandy or rum, Pudding, Pie filling and repeat the order and then whipped cream or topping. You can adjust the order if you like. Use any kind of chocolate cake you can find. Setting cherries on top can be a nice touch. If time permits you could add chocolate curls atop the whipping topping. 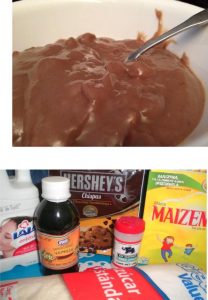 Combine the cornstarch, sugar and salt in a medium saucepan, slowly whisk in the milk, in a thin steam at first so that lumps don’t form, then more quickly once the cornstarch mixture is smoothly incorporated. Place over medium-low heat and stir occasionally, scraping the bottom and sides. Use a whisk as necessary should lumps begin to form. After 10 minutes or so (slower over lower heat is better, to give the cornstarch time to cook), before it starts to simmer, the mixture should begin to thicken, enough that it will coat the back of a spoon. Add the chocolate, and continue stirring for another 2 to 4 minutes, until the chocolate is fully incorporated and the mixture is quite thick. Remove from heat and stir in the vanilla. If you’re concerned about lumps: Run mixture through a fine-mesh strainer. Distribute among individual pudding cups or one large serving bowl, and chill until it is cool and set, about 2 to 3 hours. If you dislike pudding skin: Put plastic on top of the pudding and smooth it gently against the surface before refrigerating. Do ahead: Pudding is good for 3 days in the fridge but nobody I know would allow it to last that long.

Uniqueness that is Manzanillo