By Kirby Vickery from the June 2013 Edition

If one goes beyond the early records of the Pima and Navajo the origins of the Ho- Ho-Kam come out of their respective woodwork in the muck and mire of early Earth. Today’s archeologists have traced the beginnings back to one of two ways by doing extensive study of the Indian history mostly through their pottery.

One theory has the predecessors filtering in during the late Pleistocene era which would put them in the Desert Archaic tradition around 9000BCE. Another has them coming up from Central Mexico around 3500 BCE. If the second theory is correct the Mogollon people replaced the Desert Archaic peoples.

The Mogollon peoples were the Nahua speaking Indians and as they filtered in they broke off into several sub-sects. One of their major sub-sects was the Mimbres Culture which flourished from about CE 1000. It is through these people that archeologists have been able to track their individual histories. The Mimbres Culture produced very distinct pottery which has been easy to historically follow. It was black and white with bold lines and later carried other bold designs. The entire Mogollon inhabited area ran from Central Mexico northward up through the present day four corners area which has been designated as the Anasazi area to the eastern part of southern Arizona which became home to the group that claims their ancestors were the Ho Ho Kam.

This background history lends credence to the Mixtes’ Mythological story of the beginning of the world. Although their current story of creation labels local areas as places of happening, it also is very descriptive of places within the Gila River Basin. These people currently are a small group located in the southern part of Mexico and they are slightly isolated which according to recent history suits them just fine. They are also part of the Nahua speaking peoples and have their ancient history as being present within the Mogollon area which currently ended at the northern border of the present state of Durango.

Their world was created as it arose from the primeval muck and mire. The deer- god, named Puma-Snake had human form along as did his mate, the deer-goddess, Jaguar-Snake. They took all of the knowledge and magic and raised a high cliff and made many fine places or home in which to live. At the very top of their cliff they placed an axe with the blade facing upward. It was a fine copper axe and they had the heavens placed on it to hold them up.

In contrast to this the ancient Egyptian’s had their heavens with the stars and the moon held up by four elephants. Remember that the Greek mythology used Atlas as the god who held up the world. Egypt, at least the northern part, is sand and sandstone. The strongest thing they had seen was the elephant so it makes sense that they would recruit the animal and its strength to hold their heavens up.

The Greeks valued the human form above all else so having a ‘strong man’ supporting their world also has its logic. As with the cultures on one side of the Atlantic river, the mythological beliefs fall into the realm of being acceptable when their climate, topography, flora and fauna, is taken into consideration.

Many years passed for these two gods. After a time they had two boys who were perfect in every way and fully skilled in all the arts. They named one, Wind-Nine-Snake and the other Wind Nine Cave (Viento de Neuve Culebras and Viento de Neuve Cavernas respectively) and they could change themselves into a snake or an eagle, or even become invisible while they passed through solid things like trees and rocks.

Again, taking surroundings into consideration, these two brothers took the place of Adam and Eve in the Garden of Eden. Christian theology teaches that God provided all their needs and built/created the garden. With the

Nixtec’s these two brothers did all the work for themselves by first mixing tobacco with other herbs and mixing it into incense bowls and then letting them smolder. This became the first offering to the ancestors. Then they set about making all they could for animals and plants. They also put together a special level, grass covered, place for offerings (un prado). Then they thought of everything else and built places for lakes, running water, crops and other ecological necessities. They provided sacrifice and offerings in their special place to allow their ancestors to provide light. They also pierced their ears and tongues and sprinkled their plants and trees with their blood using willow twigs. All this ensured their continued pious good life on their little plot of earth while they propagated through the years.

Alas, as with all good stories of creation, an evil happened to these brothers. A giant flood came about which wiped out almost all the people and totally wrecked the little world on the cliff. This has to sound a little familiar when you think of Noah. It also follows through with the ending of this particular story with the appearance of a god called the Creator of All Things. He reformed the heavens and the earth and restored the human race. 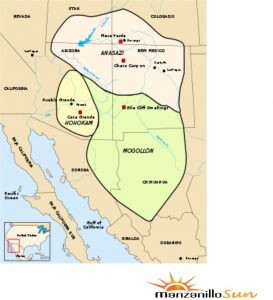